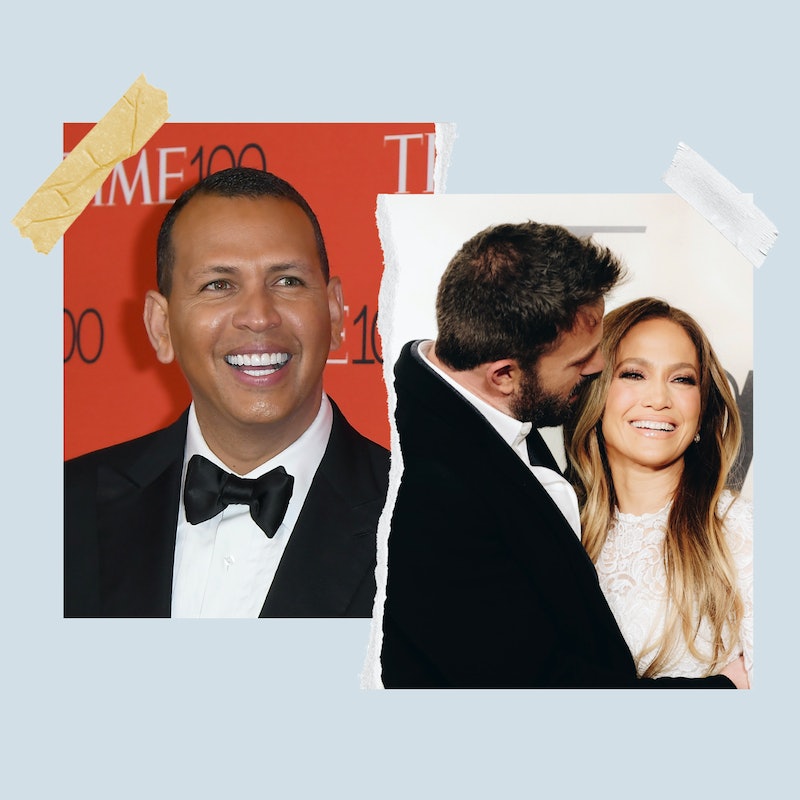 It’s official: Jennifer Lopez finally married Ben Affleck on July 16, 20 years after they were engaged the first time around in 2002, before splitting up a couple of years later. Their surprise Las Vegas nuptials made a lot of Bennifer shippers happy — particularly those who witnessed their Y2K relationship. Naturally, the newlyweds were met with an outpour of love and support from friends, family, and fans. But one person, in particular, apparently shared in the joy and was “happy” for the couple: Lopez’s ex-fiancé Alex Rodriguez.

The Yankees baseball alum was previously engaged to the “Let’s Get Loud” singer until they called it quits in 2021, after five years of being together. Though Lopez’s rekindled romance with Affleck was a “shock” to Rodriguez initially, he’s since come to accept the turn of events. A source close to the athlete told Us Weekly, “He’s happy for her and happy that she’s with the person she’s meant to be with.” The source also revealed that Rodriguez is happily coupled-up himself. “He’s in a new relationship now and is happy as well. He’s traveling all over and living his best life. He’s really focused on family, his career and what he’s got going on,” the source said.

The source added that there are no hard feelings between the former partners, even if he found out about the nuptials the way everyone else did — through the media. “He’s made peace with how things ended,” the source said, adding, “He respects her and truly wishes her nothing but the best.”

On July 13, just a few days before the wedding, Rodriguez appeared on Martha Stewart’s podcast. The two got to talking about Lopez, and Rodriguez only had good things to say about the Marry Me star. “Here’s what I will tell you about Jennifer, and I was telling some of my colleagues here the other day, she’s the most talented human being I’ve ever been around. Hardest worker. And I think she is the greatest live performer in the world today that’s alive.” He also didn’t skip a beat talking about their relationship. “Look, we had a great time,” he said. “More importantly, we always put the kids front and center in everything we do.

It wasn’t always easy for A.Rod to feel supportive of his ex’s new relationship. Following the announcement that Lopez and Affleck reconnected just a month after her split with Rodriguez in April 2021, a source close to Rodriguez told E! Online that he was “saddened” and “upset.” The source shared that “he truly thought they would be able to make it work and reconnect” with Lopez and that “he has been reaching out to J.Lo trying to meet with her and she has been very short with him.”

Despite his initial misgivings, acceptance quickly followed. In an August 2021 interview with ET, Rodriguez was nothing but grateful for their time together. “I had five years of an incredible life and partnership and also with my daughters, we learned so much,” he said, adding, “And now we have the opportunity to take that and move forward and say, ‘You know what? We’re so grateful for the last five years, how do we make the next five years better because of lessons learned?”

Meanwhile, Affleck’s ex-wife, Jennifer Garner, whom he shares three children with, hasn’t commented on his recent nuptials yet. But based on previous reports, it seems like she’d be supportive of the marriage. Back when word of his engagement circulated, a source told E! that “Jen is happy for Ben,” and that she “knows that J.Lo has been a positive influence in certain ways.”

More like this
Brad Pitt’s Recent Dating History Includes A German Model
By Brad Witter
Who Is Camila Cabello Dating? She's Getting Cozy With Lox Club CEO Austin Kevitch
By Radhika Menon
Kanye West Has The Most Kanye Reaction To Kim Kardashian & Pete Davidson's Split
By Jake Viswanath
Kim Kardashian & Pete Davidson’s Reported Breakup Has Twitter Running Wild
By Brad Witter
Get Even More From Bustle — Sign Up For The Newsletter