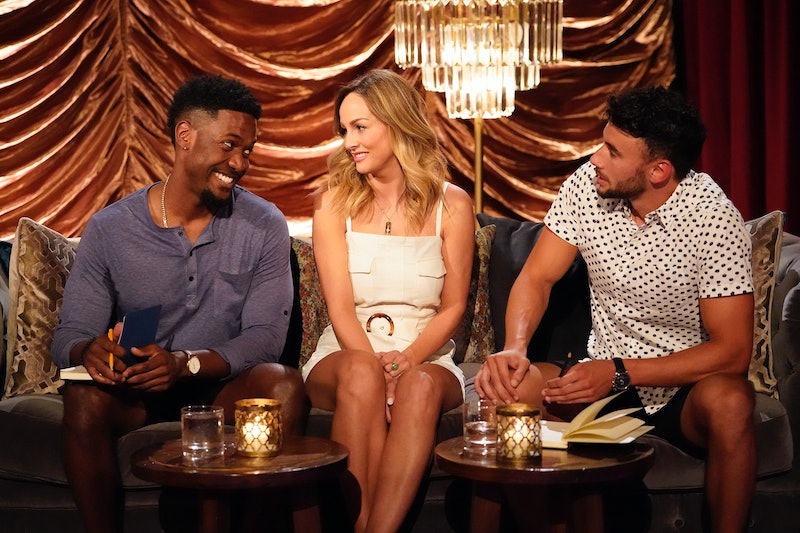 Before her historic Bachelorette switch-up can take place, Clare Crawley needs to have one last conversation with the men competing (with Dale Moss) for her affections. In a tense new clip from the Nov. 5 episode, Clare and her contestants face off after an awkward group date where the Bachelorette refused to hand out a rose after they made fun of frontrunner Dale. Per People, the men gathered to speak with Clare about her feelings before she ultimately decided to leave the show after just a few weeks of filming to be with the football player-turned-model.

"Whatever is going on right now, it needs to be addressed," Kenny Braasch tells the cameras in the clip. "I think Clare needs to step in front of the group and we need to air all this out." In the room, Blake Moynes — who infamously broke the rules multiple times to get close to Clare — shares his feelings about what's going on. "There's just been a lingering lull, and I think she kind of owes it to us because I think a lot of guys are checking out right now and I don't think that's a good thing for her," he says, to which Kenny responds, "She's lost the house at this point."

"Bottom line, it'd just be important for Clare to talk to all of us," Chasen Nick adds, as the men prepare for what Jason Foster describes as a "tough" situation. The clip ends with Clare walking into the room and letting out a big sigh, so fans will have to wait until the episode airs to see exactly how she breaks the news that she plans to leave in order to be with her rumored fiancé.

In addition to setting Clare and the men up for a tense conversation, the awkward roast group date also signaled to The Bachelorette's producers that Clare had reached a breaking point with the process. “When she didn’t give out that rose and she just gave it to herself, that was it," ABC executive Robert Mills said on Nick Viall's podcast. Mills went on to say that was the moment when the show decided to get a new Bachelorette involved.

In a separate interview with Entertainment Tonight, Chris Harrison explained that because Clare was so focused on Dale, she was no longer giving the other men "a fair shot." Speaking about Clare's decision to give herself the rose after the group date, the host continued, "She was on the group date, had talked about Dale ad nauseam, and these guys just wanted a chance." He added, "The guys aren't dumb. If you're dating somebody and you're trying to get to know somebody and you feel brushed off, you feel like they're kind of ignoring you, you feel like she's bringing up another guy nonstop... they're going to notice this, and so it was a little off-putting. I don't blame them for being frustrated in this situation."

However, Harrison reiterated that Clare falling in love with Dale is ultimately a good thing for the franchise — even if it derailed the whole season. "None of this is a bad thing," Harrison said. "If Clare's falling for somebody, and that's where this goes, then great. The whole purpose of this is to help Clare find love... If I do it in record time, that should go on my record. That should be a good thing. There shouldn't be a negative to this."