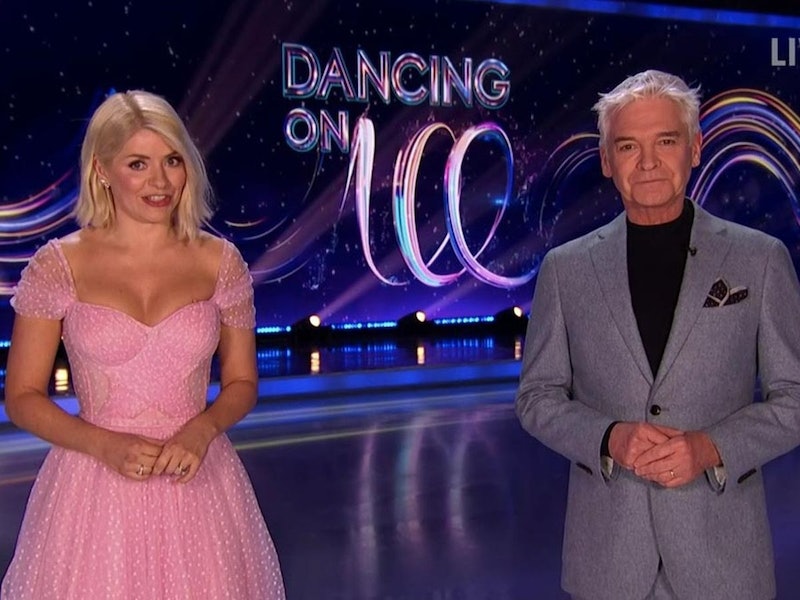 As the winter months draw ever closer, so does ITV’s annual celebrity skating contest, Dancing on Ice. Yes, the much-adored competition series is making its return in early 2023, with longtime hosts Holly Willoughby and Phillip Schofield set to make a comeback. Meanwhile, last year’s judges Oti Mabuse, Jayne Torvill, Christopher Dean, and Ashley Banjo are also set to return. But which celebrities will be taking to the rink this time around? Well, with a Love Island winner, footballing legend, Olympic gymnast, and former TOWIE star already confirmed, the series is shaping up to be a must-watch. See the confirmed names connected to Dancing On Ice 2023, below.

Former EastEnders actor Patsy Palmer, who currently lives in Malibu, California, with her partner and three children, has joined the show for a special reason. “The pact I made to myself when I turned 50, which I did this year, is that I have to do things to challenge myself for the next couple of years,” Palmer said on ITV’s This Morning, adding that she loves ice skating, but isn’t necessarily good at it. You can find the actor on Instagram, here: @PatsyPalmerOfficial.

Best known for his football career that spanned from 1978 to 1995, John Fashanu, is set to show off his moves on the ice. The former Wimbledon F.C. player is no stranger to reality TV, having appeared on ITV’s I’m A Celebrity... Get Me Out Of Here!

On joining Dancing On Ice, the 60-year-old said: “I don't think it'll come as a surprise to people that I'm very competitive. I am definitely in it to win it. And this may be one of the scariest things I've ever signed up for, but I couldn't be more ready for the challenge.” Watch the ex-footballer announce his appearance on social media, here: @TheRealJohnFashanu.

Arguably the most fascinating contestant from Love Island 2022 , Cülcüloğlu is an actor and model, who previously starred in Turkish soap operas. Speaking on Good Morning Britain on Oct. 5, Ekin-Su shared: “I can't wait to get myself on the ice and skate. Stay tuned, and see you on the ice.” The reality TV star later posted an inspirational Instagram message, telling her followers: “Dream big, stay positive, work hard, and enjoy the journey.” Since winning Love Island with her partner Davide Sanclimenti, the 28-year-old has experienced major career highs. Ekin-Su and David are set to star in their own ITV2 travel show, Ekin-Su & Davide: Homecomings, where the pair will visit each other’s hometowns in Italy and Turkey. Davide turned down Dancing On Ice to focus on other avenues, but Cülcüloğlu is thrilled to join. You can follow her journey via her Instagram profile, @EkinSuOfficial.

Swapping the balance beam for the ice rink is British Olympic gymnast Nile Wilson, who announced that he was joining the 2023 lineup on his very own YouTube channel. Describing his upcoming ice skating stint as “a really cool thing,” Wilson also revealed, “I've certainly not done much ice-skating, but I am so excited for the opportunity... to get into that routine and to feel like an athlete again.” Speaking on Youtube, the Olympic bronze medalist also disclosed that his “biggest goal on the show” is to do something “no-one has ever done before.” Follow Wilson on Instagram, here: @nilemw.

Coronation Street’s Mollie Gallagher, who portrays Nina Lucas on the ITV soap, has admitted to being “really excited” about the challenge. During an appearance on ITV’s Lorraine, she said: “I’ve not really felt nervous yet, strangely. But being here today, I am now feeling it a little bit,” she revealed, adding that she plans to get “all the tips “ she can from some of her Coronation Street co-stars. You can find the actor on Instagram, here: @mollie.gallagher_.

Adding to his already impressive net worth, reality TV personality Joey Essex will also be skating his way onto Dancing On Ice 2023. During an appearance on ITV’s This Morning, the former The Only Way Is Essex star revealed he would “love to win.” He remarked: “I’m going to put all my energy into this. This stage in my life, I’m so ready for this.”

Drag Race UK champion The Vivienne will also be sashaying her way into next year’s competition. Writing on Instagram ahead of her time on the rink, the Liverpudlian said: “This is honestly a dream come true and I can't wait to start training on the ice. To be the first drag artist to take part in one of the big UK reality competition shows is truly an honour. I think it's a big step forward for queer representation on TV.” You can follow The Vivienne on Instagram, here: @thevivienne_.

Comedian Darren Harriott was the eighth celebrity to be confirmed for the show and has appeared on the likes of Mock The Week, 8 Out Of 10 Cats, and is a regular panelist on Love Island: Aftersun. He was also involved with Dave’s campaign Comedians Against Living Miserably (CALM) in 2020, where he spoke about his relationship with his father, who took his own life in prison. Speaking to Trisha Goddard on her TalkTV show, Harriott said, “I’ve got giant feet, I don’t skate and I can’t dance. My family has already made bets — they’re making bets that I’ll fall on the first episode.” You can follow the comedian on Instagram here: @darrenharriott.

Best known as one-fifth of the early noughties pop group Liberty X, singer Michelle Heaton is swapping the stage for the ice — and she is “so excited” to get started. Speaking on ITV’s Lorraine, Heaton revealed that she and her family are “huge fans” of the show. “I’ve always wanted to do it but I know I would never have been able to complete anything because of the way I was 18 months ago, so I’m really truly grateful that I’ve got it this year when I’m a lot stronger.” Follow the “Just a Little” hitmaker on Instagram, here: @wonderwomanshel.

Actor and West End star Carley Stenson is recognised for her on-stage performances in productions such as Legally Blonde: The Musical and Les Misérables. She’s a familiar face on the small screen, too, best known for portraying Steph Cunningham in Channel 4 soap opera Hollyoaks. In a statement ahead of her upcoming Dancing on Ice stint, Stenson said: “I'm terrified, but can’t wait. I just want to make the most of this whole experience.” Keep up to date with Stenson on Instagram, here: @carleystenson1.

The Wanted’s Siva Kaneswaran completes the Dancing On Ice lineup with the announcement revealed on Good Morning Britain on Oct. 11. The singer explained that he felt inspired by his late bandmate Tom Parker, who passed away in March. “He taught me so much about life. He taught me to live life to the fullest and not be afraid. It is one of the reasons why I am doing this show.” You can follow Kaneswaran’s skating journey on Instagram: @sivaofficial.

This article was originally published on Oct. 5, 2022