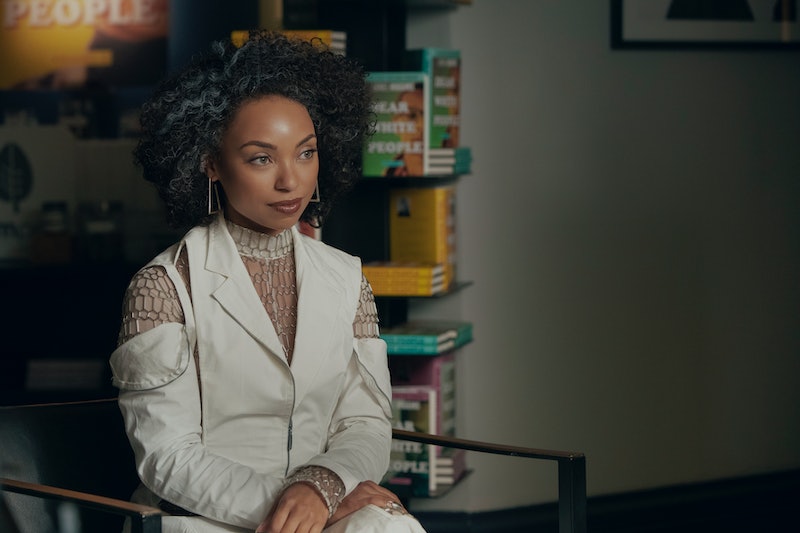 Dear White People was renewed for Season 4 merely two months after Season 3 premiered in August 2019. But likely due to pandemic-related production delays, it’s taken nearly two years for new episodes of the dramedy to hit Netflix — almost twice its usual wait time between seasons. However, the streaming service surprised fans of Justin Simien’s hit series on Aug. 17 and dropped the trailer for Dear White People’s fourth and final season, which appears to be major. Filled with timeline jumps, performances of throwback jams by Montell Jordan and En Vogue, an appearance from Queer Eye star Karamo Brown, and lots of drama, it’s safe to say the series is preparing to go out with a bang. Here’s everything we know about Season 4 of Dear White People, including its plot, cast, trailer, and release date.

Most of the series’ regular cast is returning for Season 4, mainly set during the group’s senior year at Winchester University. Confirmed to appear in the upcoming season are Logan Browning as Samantha, Brandon P. Bell as Troy, DeRon Horton as Lionel, Ashley Blaine Featherson as Joelle, Antoinette Robertson as Coco, John Patrick Amedori as Gabe, and Marque Richardson as Reggie. Joining the cast for Season 4 is How To Get Away With Murder star Rome Flynn as David as well as Queer Eye’s Karamo Brown, who’s featured in its trailer. The Fab Five member will be a fitting guest star, as the hit revival makeover series was parodied in Season 3.

Another brand-new character fans will meet this season is Iesha Vital, a freshman student and activist at Winchester played by Joi Liayé (The Fosters). Speaking to Entertainment Weekly, Simien and his co-showrunner and executive producer Jaclyn Moore offered up more details about Iesha. “Out characters jokingly refer to Iesha as ‘New Sam,’” said Moore. Simien added: “She's that next generation. Her activism is a bit louder than Sam's — it doesn't care as much about the establishment, which is who Sam was when we first meet her in the movie and at the beginning of the series.”

Moore then detailed that Sam and Iesha have some tension. “What we wanted to explore is something that I think we've all sort of felt at times in our lives, which is that you begin your life railing against the system,” she said. “[Then] at some point, the system tries to co-opt you, and there will be other people railing against you. Putting it another way: We always said in the [writers] room, at one point Nancy Pelosi was someone else’s AOC. And who knows, 40 years from now, there's going to be somebody who's the AOC to AOC.”

One character that viewers won’t see in Season 4 is Rashid Mburu, played by Jeremy Tardy, who chose to leave the show after accusing production company Lionsgate of racial discrimination. In a series of September 2020 tweets, the actor explained, “After being offered to return for several episodes my team was notified that our counter offer would not be considered and that the initial offer was the ‘best and final.’” He noted that one of his “true ally” white co-stars disclosed that they’d received the same offer and successfully negotiated a higher rate. Tardy continued, “My team expressed this issue to Lionsgate and the producers maintained their position that the white actor was able to negotiate while I was not, regardless of my credits and experience.”

The actor further detailed the alleged events, claiming that he and “six recurring cast members” approached Lionsgate to pass on the initial offers. “Our stance was to move powerfully as a unit in the negotiation process and, more importantly, to stand on principle because this is not simply a monetary matter. We were all aware of the notorious pay disparities between people of color and our white colleagues on Netflix and Lionsgate shows; so this made it blatantly obvious.” However, he added that the executives “undermined” the cast’s collective bargaining power with “side deal offers and lack of transparency,” which led individuals to accept offers before their colleagues were able to successfully negotiate.

As the controversy coincided with last summer’s explosion of the Black Lives Matter movement, Tardy called out the streaming service and production company. “Politically correct lip service and symbolic gestures do not absolve you of the daily responsibility of doing business in a fair and equitable manner,” he wrote. “The fact that this has occurred behind the scenes of a show which purports to address systemic issues of racism and discrimination displays the very epitome of hypocrisy. Lionsgate. Netflix. I see you. We see you.”

The series’ fourth and final season will fittingly take place during the Winchester crew’s senior year. Based on a real-life tradition at Columbia University, the students are working to produce the Varsity Show, aka the annual student-produced and satirical musical about the school. Samantha (Browning) is filming the process, as the Black students of Armstrong-Parker House are in charge of writing the show for the first time in Winchester history. Led by Troy (Bell), the musical will be ’90s-themed with performances of Jordan’s “This Is How We Do It,” En Vogue’s “Free Your Mind,” Tevin Campbell’s “Round and Round,” and Johnny Gill’s “Run You the Right Way,” among other memorable songs. But some students aren’t impressed with the Varsity Show’s direction, with a member of the school’s “Black AF” group comparing it to a minstrel show and declaring a protest of the production.

In an interview with Entertainment Weekly published on Sept. 20, Simien detailed the inspiration behind turning the show into a musical for its final season. “I wanted to go out with a bang. Frankly, I needed something really joyful to come to work and do,” he told the publication. “The show is always sort of a bit of a backdoor diary for me. And some of the things that I was really grappling with [were like], how much fun am I having? If this is success, and I fought really hard for it, and I'm working really hard to keep it, when does it become not exhausting? When does it become joyful? When am I not just mining my own trauma?” He continued, “And so the characters began to grapple with that in all of my iterations this season. And musicals, for me, have always been best suited for those kinds of scenarios.”

Netflix released the official trailer for Season 4 of Dear White People on Aug. 17, and it features a preview of the high-energy musical performances to come from the Winchester students.

As revealed in the trailer, all 10 episodes that make up Season 4 of Dear White People will arrive to Netflix on Sept. 22.

This article was originally published on Aug. 17, 2021