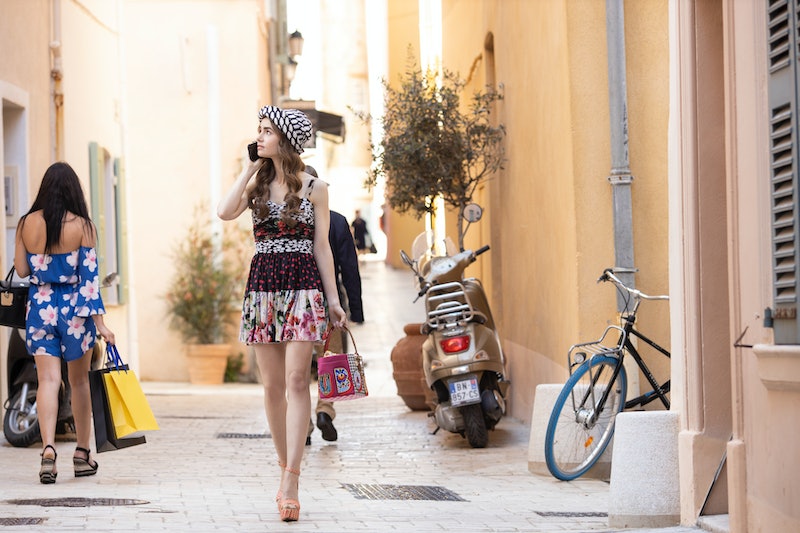 Netflix’s Emily in Paris is back for Season 2, and so is the 20-something marketing executive everyone loves — or loves to hate. Season 1 wrapped with Emily Cooper (Lily Collins) finally adjusting to her new life in Paris, excelling at her job, and of course, juggling a few romantic flings. Released Dec. 22 on the streaming platform, the 10-episode new season finds Emily continuing to navigate French culture and attempting to focus on work, despite finding herself in a love triangle with Gabriel (Lucas Bravo) and his girlfriend Camille (Camille Razat). Along the way, she grows close to a new classmate, Alfie (Lucien Laviscount), who’s similarly adapting to life in Paris after moving from his native England.

Aside from the eye-catching outfits and Sex and the City-esque romance and drama, the best part of the Darren Star-created series is easily its gorgeous, picturesque European settings. From parties at Le Café de l’Homme and the Musée des Arts Forains to performances at the Palais Garnier and La Monnaie de Paris, it wasn’t hard to understand why Emily constantly posted photos of herself on Instagram throughout Season 1. This time around, the titular character takes viewers everywhere from Paris gay bars to the French Riviera. Here are the filming locations featured in Season 2 of Netflix’s Emily in Paris.

Looking to escape Paris and deal with residual guilt over sharing kisses with the not-at-all-single Gabriel, Emily embarks on a weekend trip to Saint-Tropez along with Mathieu Cadault (Charles Martins). But after leaving from the gorgeous, art-filled international train station Gare du Nord in Paris, Mathieu catches her on a phone call with Gabriel and frustratedly departs the train mid-ride, leaving Emily solo on her way to the French Riviera village.

After arriving in Saint-Tropez, Emily checks into the glamorous Grand-Hôtel du Cap-Ferrat, a Four Seasons hotel on the French Riviera distinguished as a “Palace de France” by the nation’s government. Featuring an ocean view, the hotel is actually located in Saint-Jean-Cap-Ferrat rather than Saint-Tropez, and it’s appeared in several films and television shows, including Dirty Rotten Scoundrels.

Back in Paris, Emily’s colleague Luc (Bruno Gouery) takes her out on a lunch date, during which they visit the city’s largest cemetery, the historic Père Lachaise. Together they visit the grave of famous French novelist and playwright Honoré de Balzac, one of many high-profile individuals buried there, including Oscar Wilde, Jim Morrison, and Édith Piaf.

While hanging out with her new classmate Petra (Daria Panchenko), Emily indulges in a bit of shopping at Galeries Lafayette, the largest department store in Europe, located in an upscale Parisian shopping center.

Following her failed stint on a reality singing competition show, Emily’s close friend and roommate Mindy Chen (Ashley Park) has finally worked up the courage to sing again, performing songs by the likes of BTS and Celine Dion with her band throughout Season 2. In Episode 4, she delivers a performance at the monumental Fontaine Saint-Michel, located at Place Saint-Michel in the 6th arrondissement in Paris and constructed around 1860.

In Episode 5, Emily’s marketing firm Savior hosts a party on a bateaux mouche, aka a large open excursion boat, which floats down the Seine river backdropped by the Eiffel Tower. At the event, Mindy sings a rendition of “Diamonds Are a Girl’s Best Friend” from Gentleman Prefer Blondes.

On another night out, Emily and her colleague Julien head to a gay bar called Le Raidd, located near the historic Centre Georges Pompidou in the Beaubourg area of the 4th arrondissement of Paris. Known for its signature shower strip shows, Le Raidd has been voted one of the 100 best bars in the city by Time Out.

In Episode 8, Emily and Camille go to the Champ de Mars, a large public field located between the Eiffel Tower and the École Militaire, to watch Gabriel and Alfie play a game of English football.

In the Season 2 finale, Emily works on a fashion show held at the iconic Palace of Versailles, a former royal residence located west of Paris. Owned by the French Republic, it’s since been turned into a popular tourist location that generally welcomes around 15 million visitors a year.