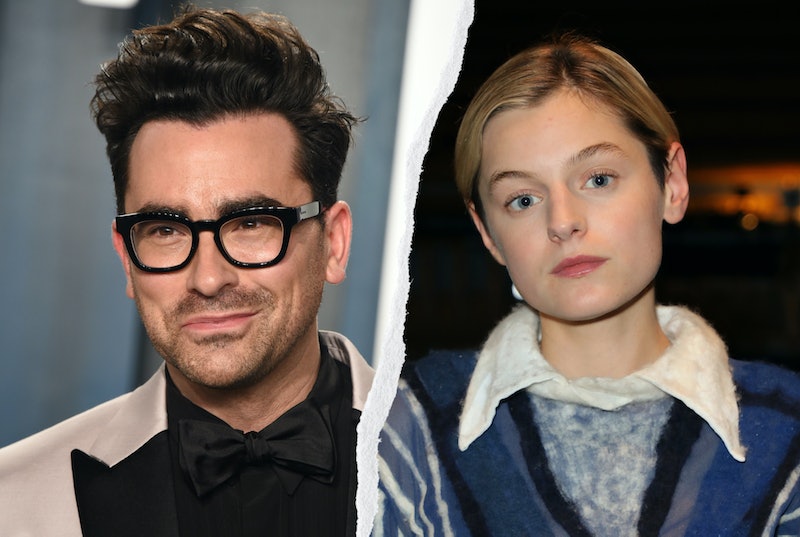 Yes, Emma Corrin is a Golden Globe-winning actor who’s effortlessly portrayed one of the most iconic, glamorous women in history — but The Crown star’s breakout success belies an extremely relatable side. Case in point: her obsession with Schitt’s Creek. Just like you, Corrin couldn’t help but “devour” the show, which she described as a “comforting favorite ... a they-feel-like-my-friends kind of TV program,” in conversation with W Magazine.

Corrin sported a David Rose-inspired ensemble — lightning bolt sweater, Converse, and all — for her spot in W’s TV Portfolio, where stars dress up as their favorite characters from other shows. But the admiration apparently goes way beyond sartorial. In fact, Corrin even revealed that Dan Levy himself had come to watch the Emmy nominee in Anna X, her recent London play, and joined Corrin and her flatmate for dinner. “He’s a gem,” Corrin said. “He’s the wisest, kindest, funniest person, and I didn’t want it to end. I feel like we could have talked forever. It was really nice.”

Levy brought the big brother energy to Corrin, who fittingly said she’s very much down to learn the choreo for “A Little Bit Alexis.” As she and her flatmate were, naturally, “having various crises that you have in your 20s,” Levy dished some seriously sage advice.

“‘Guys, honestly, your life will change so much, and in ways that you cannot expect,’” Corrin recounted, “‘[so stop] worrying about trying to fix everything and have it exactly the way you think it should be, or preempting things or trying to have control over everything at this stage of your life. ... Don’t sweat it, because you have no idea what’s going to happen, and stuff changes. Just let it go a bit.’” (Sure, the advice may have been meant for Corrin, but you can totally jot that down.)

Both Corrin and Levy’s beloved series revolve around some very dramatic families. But The Crown might soon relate to Schitt’s Creek in another major way — a gold, shiny way, to be specific. The prestige Netflix drama is currently nominated for a whopping 24 Emmys, including an Outstanding Lead Actress nod for Corrin, and could potentially see a similar sweep to Schitt’s Creek’s Emmy haul last year.

Awards domination or not, Corrin still has plenty going on, like her highly anticipated turn in My Policeman alongside Harry Styles. The actor won’t return to play Princess Diana (Elizabeth Debicki will be taking up the mantle for The Crown’s final seasons), but Corrin did reveal what it’s like seeing herself in the iconic role. “Sometimes I’m scrolling Netflix, and I forget that it’s on there, and I’ll see my face, and it is so strange,” she said. “A few times when I’ve been alone, scrolling, I’m like, Should I just watch an episode? Would that freak me out? What would that be like? It’s a weird one.”

More like this
Nicola Coughlan Shared A Lady Whistledown Excerpt From ‘Bridgerton’ Season 3
By Grace Wehniainen, Alyssa Lapid and Sam Ramsden
Everything You Need To Know About The 'Knives Out' Sequel
By Bustle Editors
Netflix Reveals First Look At Wednesday In The 'Addams Family' Spinoff Series
By Bustle Editors
Caleb McLaughlin Details Racism From 'Stranger Things' Fans
By Radhika Menon
Get Even More From Bustle — Sign Up For The Newsletter