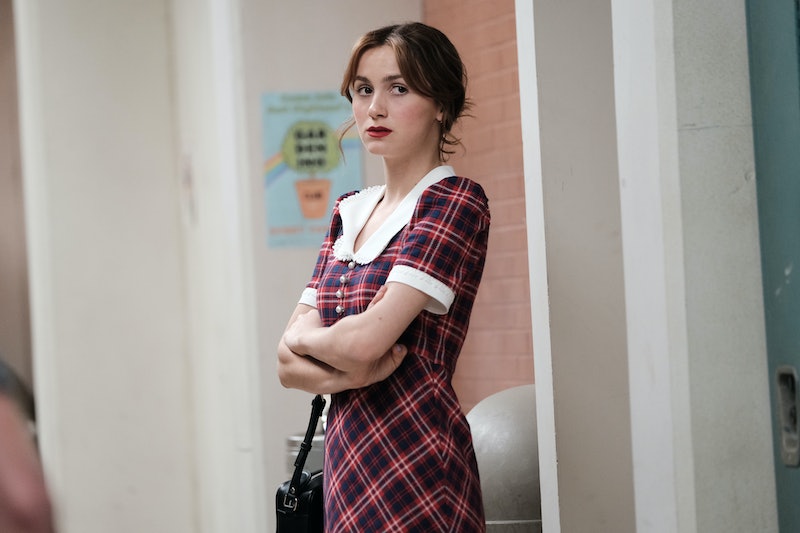 Spoilers ahead for Euphoria Season 2, Episode 3.

Euphoria is a show about wild teens doing wild things in wild outfits. The characters attend rave-level parties, engage in heavy drug use, and have tons of very graphic sex — sometimes with their classmates’ parents. But amid it all is Lexi Howard (Maude Apatow), the patron saint of boring girls everywhere who just want to get good grades and maybe star in the school play.

Lexi was introduced in Season 1 as the childhood best friend of Rue (Zendaya) and sister to Cassie (Sydney Sweeney), largely living in the shadow of the cool girls who orbited her. She didn’t have many scenes, but we did get whiffs of her sharpness and humor: She appeared in a fourth wall-breaking buddy cop skit with Rue, always seemed ready with a clever retort for Cassie, and iconically attended a Halloween party in a Bob Ross costume. In the Season 2 premiere, while Rue got high and Cassie hid in a bathtub with Maddy’s (Alexa Demie) pee rag, Lexi sat on the couch and patiently explained the origins of Christmas to Fezco (Angus Cloud). She’s the kind of girl you can imagine guys referring to as “cute but not hot” because she wears quirky clothes and isn’t overt in her sexuality; the archetypal overachiever and sole character who might actually do her homework. Lexi is always just kind of there, but Season 2 reveals that’s because that’s how she prefers to be.

As Rue explains in her narration during Episode 3, after Cal (Eric Dane) confronted Fezco at the convenience store, Lexi realized that she enjoys being an “observer” rather than an active character. “She often imagined that her parents weren’t really her parents, and her sister wasn’t her sister, and that her house wasn’t even really her house,” Rue says. “That it was just a movie, one that she was writing.”

We then see Lexi imagining that she’s the showrunner of her own life on a series titled This Is Life. Her house is a set, and all of her friends are simply actors in her production. When Cassie walks onstage to play her sister, Lexi tells the wardrobe department that her dresses need to be “sluttier,” “tackier,” and “sloppier” — a nod to the hyper-sexualized aesthetic of Euphoria that Lexi’s own clothes are at odds with. Producer Lexi tells us that This Is Life follows Grace, a 16-year-old girl who’s outshined by her older sister Hallie. “Look, the sidekicks are usually the more sensitive, smarter, or compelling characters, but for some reason they just get overlooked,” Lexi explains. In her world, the sidekick is the lead, which is presumably what her “anti-Oklahoma” play is about that she gets the green light to perform at school.

The joke at the center of this dream is that supporting characters are often sidelined because their storylines are deemed less dramatic or interesting. If Lexi were an actual creator pitching an HBO show, Cassie getting an abortion and later sleeping with her best friend’s abusive boyfriend is a story that’s much more likely to get optioned than one about a girl wearing tartan and playing second fiddle to the rest of her friends. The supposed lead of a show would probably not get dolled up for her crush and then barely speak to him, but that’s exactly what Lexi does when she puts on a red lip and goes to visit Fezco at the gas station.

Yet within the confines of a series that routinely pushes the boundaries of what can be shown onscreen, there’s something strangely comforting and endearing about Lexi’s comparatively ordinary life. Many Twitter users have glommed onto the fact that amid Kat’s webcamming and Rue’s hard substance use, it’s Lexi’s so-called boringness that most accurately reflects their own teen years. Out of all the characters, Lexi is the one we can count on to not stress us out.

Euphoria is largely about creator Sam Levinson’s experiences as a substance user, but its over-the-top portrayal of adolescence has also made it the stuff of memes. "The series Euphoria… is a lot. I don’t particularly like it, because I sense that it tries to be more 'shocking' and 'edgy' rather than genuine,” one teen told Vice in 2019. Like us as viewers, Lexi is an outsider looking into the world of Euphoria, and that often makes her the character who’s easiest to identify with. Call her boring if you want, but in this house we support eccentric theater girls who just want to journal and maybe hold hands a little. Protect Lexi and her equally relatable crush on our sensitive bad boy king!!