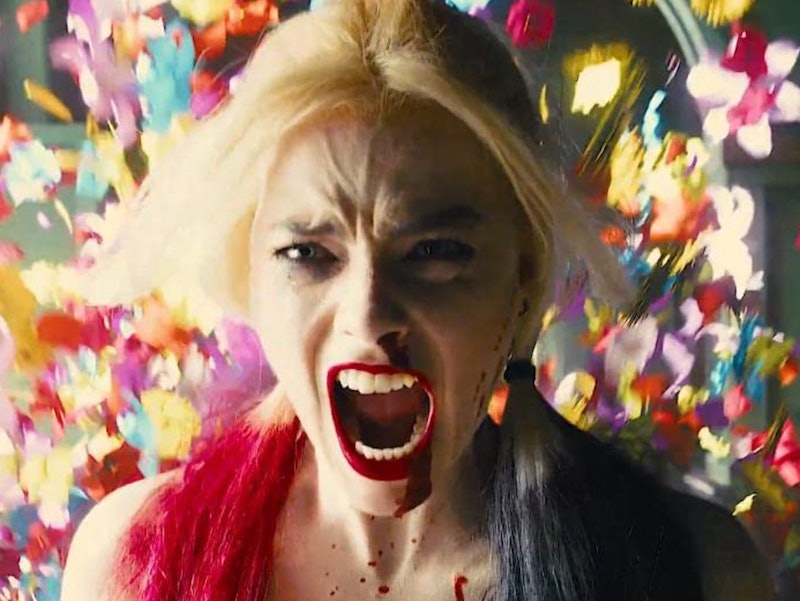 Everyone’s favorite supervillain will look a little different come August 5, when The Suicide Squad (a standalone sequel to the 2016 film Suicide Squad) hits theaters across the U.S. For starters, her hair is different: Instead of her famously perky pigtails with pastel pink and blue tips, the new version of Harley Quinn — played again by Margot Robbie — has low pigtails with black and red ends. Her iconic blue and pink eye makeup has also been replaced with a sinister red eyeshadow. And that “rotten” tattoo? Gone.

The changes to Quinn’s look reflect a new side of the Gotham City character, who is tasked with a mission to destroy a Nazi-era laboratory alongside Bloodsport (Idris Elba), Peacemaker (John Cena), Amanda Waller (Viola Davis), and other members of Task Force X. "When Harley is put in different group of people and put in a different place you're going to see different aspects of her personality come out depending on how she feels about those people and what she’s doing,” Robbie said about the film in August 2020.

Her physical transformation came courtesy of makeup artist Heba Thorisdottir, who chatted with Bustle over Zoom about the inspo behind Harley Quinn’s makeup look and her partnership with Smashbox Cosmetics. Surprisingly, she says that she “applied the energy and power” of Alice Cooper to Quinn. “We had more Alice Cooper pictures on the wall [for inspiration] than any of the DC comics,” she adds. “For Harley, I was more inspired by rock ‘n’ roll because she’s such a rebel.”

Looking to music for inspiration came naturally to Thorisdottir, who worked on music videos for Bruce Springsteen, R.E.M., and Red Hot Chili Peppers before doing the makeup for films like Once Upon A Time In Hollywood, Avengers: End Game, Captain Marvel, and more. “I often make playlists for the characters I’m working on,” she says. “I asked Margot, ‘What would Harley be listening to? Nina Hagen?’ and she was like, ‘Yes! Nina Hagen.’ So we played her in the [makeup] trailer a lot — not early in the morning, though.”

Though Quinn’s aesthetic is a little different, she’s still seen in her signature white makeup (a result of her being thrown into skin-bleaching acid by the Joker, as the story goes). “Margot worked on Birds of Prey, and three weeks later, we started working on Suicide Squad,” Thorisdottir says. “So, for about eight months out of the year, she was in the white makeup, which wasn’t just on her face, but her entire body. But she never complained once.”

Those who want to recreate Harley’s look are in luck: Thorisdottir worked with Smashbox to create a new, limited-edition capsule inspired by the film. The lineup doesn’t include white makeup, but it does feature five reimagined shades of Smashbox’s Be Legendary Lipstick (including an eye-catching violet and very Harley Quinn-esque red) as well as five colors of the Always On Cream Eyeshadow (the electric blue shade “Javelin” being Thorisdottir’s personal fave). And fans have more reasons to get excited: In October, the brand will release a Harley Quinn Makeup Kit. Though Thorisdottir remained tight-lipped about the contents inside, it’s safe to consider your Halloween look secured.

The Smashbox x The Suicide Squad collection is available now through Smashbox and Macy’s.

More like this
The Best Beauty Looks Spotted At Paris Couture Week 2023
By Audrey Noble
Kim K, Oprah, & Jennifer Lopez Celebrated 25 Years Of Anastasia Beverly Hills
By Olivia Rose Rushing
Pamela Anderson's Most Iconic Makeup & Hairstyle Moments
By Olivia Rose Rushing
15 Modernized '60s Makeup Looks & Hairstyles That Feel Wonderfully Retro
By Olivia Rose Rushing
Get Even More From Bustle — Sign Up For The Newsletter
From hair trends to relationship advice, our daily newsletter has everything you need to sound like a person who’s on TikTok, even if you aren’t.