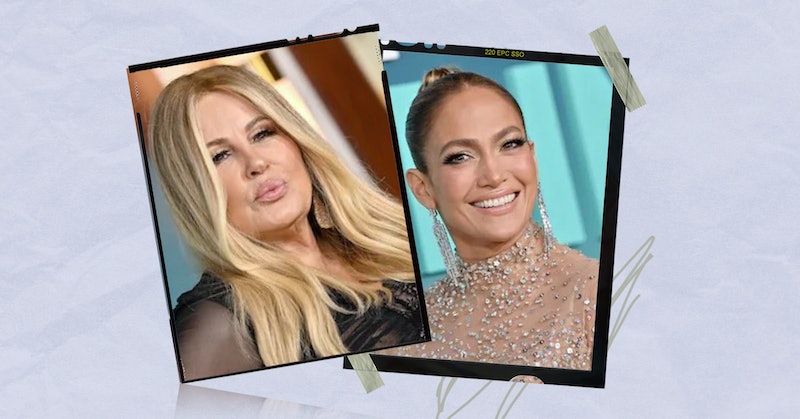 The Jennifer Coolidge renaissance is in full force — and she’s teaming up with another famous Jennifer to continue the momentum. On Jan. 19, the Emmy winner made her TikTok debut with the assistance of Jennifer Lopez, her Shotgun Wedding co-star. In her first TikTok, J.Cool decided to recite J.Lo’s anthem “Jenny From the Block” as if it were a poem — which, honestly, it is.

“Hiii,” she began. “This is my first TikTok, and I was trying to think of something cool to do, and I think, um, I think I’m just gonna do a poem that I like.” Coolidge then recited the chorus to J.Lo’s 2002 hit, which could also apply to herself given their shared first name. “Don’t be fooled by the rocks that I’ve got,” she continued. “I’m still Jenny, Jenny, Jenny from the block.” She then panned the camera to reveal J.Lo sitting next to her, and she was very impressed by J.Cool’s reading. “I like that,” J.Lo said. “I really do like that.”

Fans and celebs alike went bananas for the video, which was also shared as a joint post on both stars’ Instagram pages. Coolidge’s Legally Blonde co-star Reese Witherspoon commented on the Instagram post, saying it was “too good,” while Naomi Watts remarked that the “internet just broke.” Coolidge’s White Lotus co-stars also chimed in, with Meghann Fahy saying “I just liked this twice” and Haley Lu Richardson writing “oh my actual god.” Even TikTok couldn’t get enough, with the brand’s Instagram account commenting “screaming crying throwing up.”

Shotgun Wedding marks the first time both Jennifers have starred onscreen together, and they’re taking advantage of their combined star power to promote the movie. After the film’s red carpet premiere, Lopez went live with Coolidge from the after-party on Instagram and celebrated their joint slay. “This woman was fantastic,” Lopez gushed, to which she responded with a classic Coolidge “Woohoo.”

Lopez’s husband Ben Affleck also made a fun kissing cameo in the Instagram live, because what’s a modern-day J.Lo movie premiere without Bennifer?

More like this
Olivia Rodrigo Manifested Finally Meeting Demi Lovato
By Jake Viswanath
Taylor Lautner Thought Taylor Swift's 2009 VMAs Interruption Was A "Skit"
By Alyssa Lapid
The Jonas Brothers' New Album Has A Very Meta Name
By Alyssa Lapid
Brad Pitt Wants To Share The Spotlight With This Celeb In Shania Twain’s “That Don't Impress Me Much”
By Alyssa Lapid
Get Even More From Bustle — Sign Up For The Newsletter
From hair trends to relationship advice, our daily newsletter has everything you need to sound like a person who’s on TikTok, even if you aren’t.