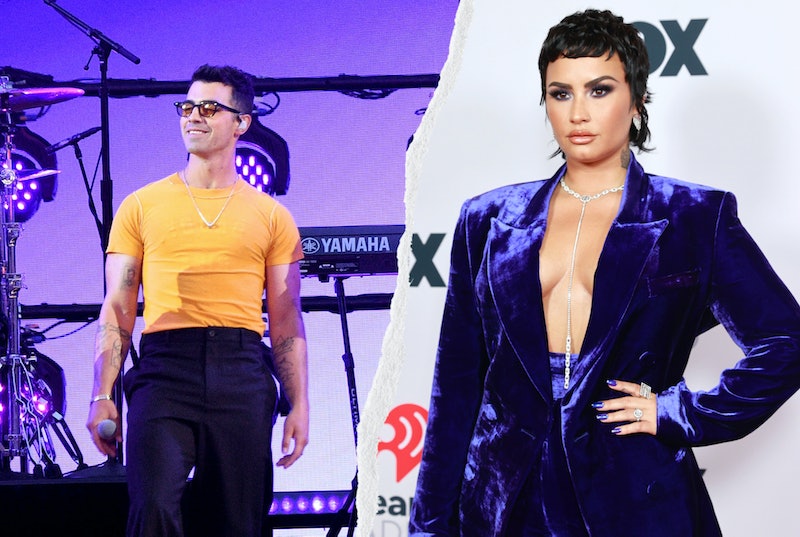 Next to candy and spooky movie marathons, celebrity costumes (and the parties they wear them to) are among the best parts of Halloween — and on that front, Demi Lovato and Joe Jonas delivered in a major way. On Saturday, Oct. 30, Jonas shared a selfie to his Instagram story in which he’s posing next to his ex and former Camp Rock co-star, Lovato, and both were all smiles. Jonas paired the sweet snap with a purple heart emoji, and Lovato reposted it to their story in turn.

Before meeting up at a star-studded Halloween party — which appeared to be (what else?) Squid Game-themed — Jonas and Lovato began their nights separately. For his part, Jonas dressed up as Paolo from The Lizzie McGuire Movie, with his, wife Sophie Turner, and her Staircase co-star Olivia DeJonge as Isabella and Lizzie, respectively. Meanwhile, Demi kicked things off with Ashley Benson, Vas Morgan, and Paris Hilton, with whom the “Dancing with the Devil” singer had recently been spotted shopping for Halloween costumes, per Just Jared. Ultimately, Lovato picked out an edgy, all-black leather look for the big night, while Benson opted for a Clueless-inspired outfit, Morgan donned a Squid Game tracksuit, and Hilton went full princess.

In addition to their adorable selfie, Jonas and Lovato shared a glimpse at the rest of their respective Saturday night activities. Jonas’ Lizzie McGuire photo (in front of the Squid Games backdrop, no less) is, of course, what dreams are made of.

Even though it’s been more than a decade since they worked together on the Disney Channel, it looks like Jonas and Lovato wouldn’t change a thing about their current friendship — which, over those 10-plus years, has been defined by supportive shoutouts and the rare (but always amazing) reunion.

In 2017, Jonas and Lovato shared another iconic selfie captioned “CR3?” teasing the possibility of a new, trilogy-making Camp Rock follow-up. (Still waiting on that one...)

Later that year, ahead of Lovato’s documentary Simply Complicated, the singer revealed they “[weren’t] acting much” when their character, Mitchie, fell for Jonas’ Shane, and even pointed to the exact moment it happened IRL (it’s when Mitchie finds Shane playing guitar by the lake, in case you were wondering). Lovato was also extremely vocal in their congratulations for Jonas and Turner’s engagement, and featured a Jonas Brothers-esque trio in their video for 2020’s “I Love Me.” In the video, Lovato looks back at the brothers with a small smile — an apparent Easter egg that seemed to hint they remembered that part of their life fondly. Of course, anyone who was brought up by Camp Rock and the JoBros probably feels the same, too.

More like this
Now That 'Renaissance' Is Here, Let’s Revisit Beyoncé’s First Solo Album From 2003
By Grace Wehniainen
The Weeknd Is Turning 2020’s ‘After Hours’ Into A Nightmarish Haunted House
By Radhika Menon
Demi Lovato's New Song "29" Hints At Their Age Gap From Ex-Boyfriend Wilmer Valderrama
By Jake Viswanath
Victoria Beckham Brought Posh Spice Back In A Very Rare Performance
By El Hunt
Get Even More From Bustle — Sign Up For The Newsletter