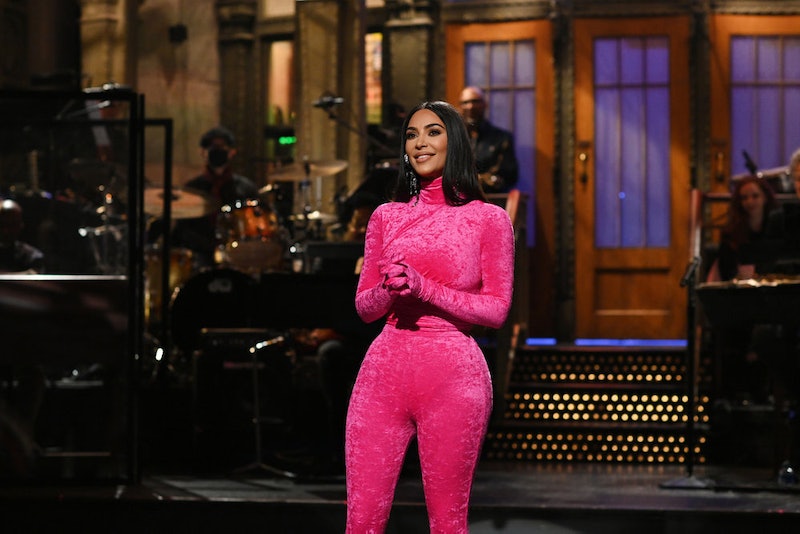 In Kim Kardashian West’s Saturday Night Live episode on Oct. 9, the reality star wasted no time lampooning her very famous family. From the monologue, during which Kardashian swore she was “so much more than that reference photo [her] sisters showed their plastic surgeons,” to her turn spoofing Kourtney and co. on “The People’s Kourt,” no sibling was safe — but as behind-the-scenes social posts reveal, the family took it all in stride.

Khloé Kardashian and Kris Jenner showed their support by being at the show, of course, where the mother and daughter appeared in two sketches. When they weren’t acting alongside Kim, they were cheering her on backstage: “My queen!” shouted Khloé in a video posted to her Instagram story that encouraged her followers to watch. “Look at that waist! What. Waist. Sashay — you guys better tune in, that’s all you’re getting, you better tune in.” Khloé also shared video of the team backstage cheers-ing to the show with pizza and champagne, plus a photo of a handwritten note that read, “I ♥ YOU + I’M SO PROUD OF YOU TONIGHT! EGOT!!” (Ostensibly, the scrap was for Kardashian — but Khloé gave her own iconic performance that night, too, so maybe it was actually for her?)

Kris, for her part, shared a photo of her name on an apparent dressing room placard — a pretty big honor. She and Khloé also joined Aidy Bryant for a fun behind-the-scenes TikTok based on the SNL star’s Kim-ification in the “Switch” pre-tape. The video documented Bryant’s look change over the course of the week, culminating in a final clip for Saturday: “It’s show day!” she cried, flanked by Khloé and Kris in the dressing room mirror.

Not every member of the enormous extended family could be in attendance for Saturday’s show, of course — but Kardashian still had plenty of support from across the country. As they shared on their Instagram stories, Kendall and Kylie Jenner started their day together with a morning walk and ended it watching SNL on TV. And after celebrating Landon Asher Barker’s birthday during the day Oct. 9, Kourtney caught up on the episode and shared her reaction Sunday morning, reposting a clip of “The People’s Kourt” and adding the caption, “i’m good at this.”

A photo shared by Huck to his story also confirmed that Kris’ boyfriend, Corey Gamble, got in on the fun. “Forever the vibe,” Huck captioned a photo of Gamble adorned in Kardashian’s hot-pink, feathery ensemble.

“So guess where I’m going?” teased Anthony in a pre-show story video. “Saturday Night Live to watch my ride-or-die f*cking kill it tonight!”

Shepherd shared a photo of herself and Kardashian running lines on Friday, Oct. 8.

All the star-studded support seemed to do the trick for Kardashian’s SNL debut, which served hilarious, self-referential laughs all evening long.

More like this
Kim Kardashian Gives “Bucket List Dream” Lecture At Harvard
By Alyssa Lapid
Khloé Kardashian Writes Touching Instagram Tribute To Tristan Thompson’s Mother
By Alyssa Lapid
North West Will Make Her Acting Debut Alongside Mom Kim Kardashian
By Radhika Menon
Everything You Need To Know About Kanye's Post-Kardashian Dating Life
By Bustle Editors
Get Even More From Bustle — Sign Up For The Newsletter
From hair trends to relationship advice, our daily newsletter has everything you need to sound like a person who’s on TikTok, even if you aren’t.