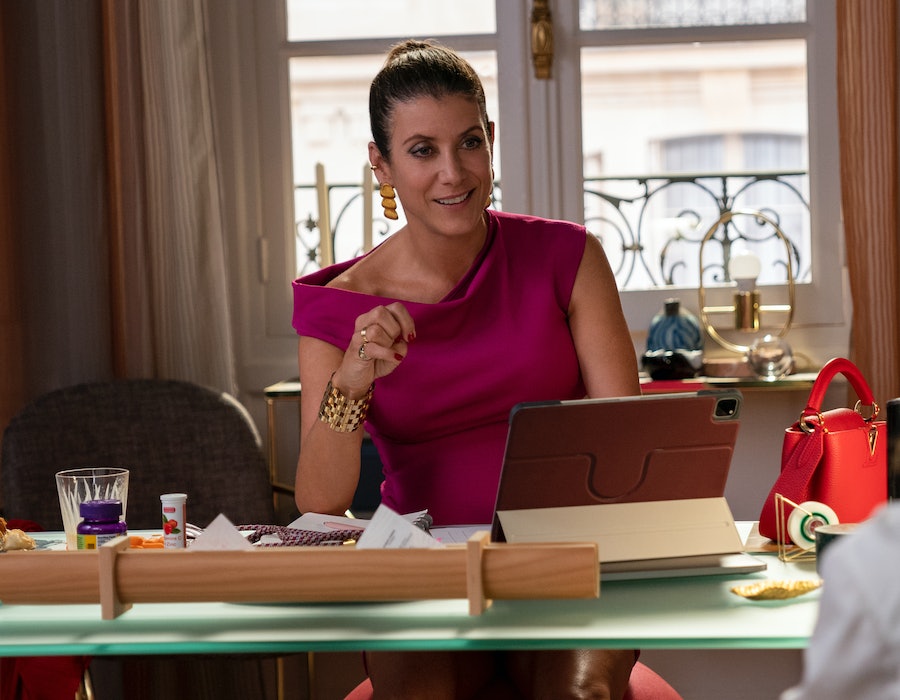 We’re in the middle of the holiday season, which may be why Kate Walsh compares Emily in Paris Season 3 to a classic Christmas movie. “It was really fun for me to have so many scenes with Lily [Collins] this year,” Walsh tells Bustle from Paris, France. “I told her, I feel like the Grinch, and you’re the dog that I’m putting antlers on, making you do all this stuff.”

Madeline and Emily open the third installment of Darren Star’s Netflix series with a new, chaotic dynamic. Madeline is a new mom, working to exert control over The Gilbert Group’s overseas operation; her star employee Emily tries to oblige her boss while becoming increasingly loyal to her co-workers and the city she now calls home.

That push and pull reaches a near-literal boiling point in Episode 3 when Emily’s former boss Sylvie schemes to overheat the Savoir building to sabotage Madeline and Emily. Walsh had a hand in brainstorming the physical comedy that follows — like when a pigeon lands on Madeline’s head during a crucial Zoom call. “Even with as fast as we shoot, and the locations, which can make it prohibitive to get many takes, there’s still a spirit of exploring, heightening, and pushing the bounds,” Walsh says.

Between Emily in Paris and Grey’s Anatomy (as well as its spinoff, Private Practice), Walsh has worked with some of the most prolific creators in TV — so she has an idea of what makes each show so beloved. “With the shows [Star]’s created, he’s got that magic thing of being able to tap into culture and what people really want to see and experience ... the joy, and the fun, and the escapism, and the beauty of Paris,” Walsh says. “And with Shonda [Rhimes], she’s kind of cornered the market on character exploration and empowerment, but also dealing with people and social issues.”

Below, Walsh discusses Madeline’s future on Emily in Paris and what she thinks Madeline and Addison Montgomery have in common.

I loved seeing you play a bigger role in Season 3. What was it like to come in and flesh out Madeline’s character a bit more?

I was thrilled with the scripts and really felt the joy — it was very palpable. The writers were having fun writing Madeline, so it’s really easy for me to play and just go to town.

Madeline’s ties to the business side of things may seem settled for now, but she’s still such an important person in Emily’s life. What do you hope she’s doing offscreen? Do you think we’ll meet her again?

I can’t imagine Madeline not plotting and scheming. She’s too competitive. She’s not just going to let it go. So we’ll see what happens. But I hope for her to come back in some way. I love their relationship, too. For better or worse, she’s Emily’s mentor.

In Season 1, Madeline’s pregnancy is the plot device that sets Emily’s story into motion, but we don’t really see her make the decision to be a mom or to stay in Chicago. Was it important to flesh out her relationship with motherhood this time around?

Yeah, but in the spirit of the show — it’s all about joy, expansion, and living your best life. I loved Darren’s whole approach to it. It’s fun to see her doing it and enjoying it. I love that she was unabashedly pregnant. She was like, “Yeah, I’m gonna rock this.” There were never moments of like, “Oh my gosh, I’m doing this alone.” It felt very empowering and exciting — and really, an opportunity for her to wear mini, form-fitting dresses and still wear a heel.

She says in one episode, “I did it! This was my dream, and I did it.” Despite all the work challenges and that whole dynamic, she’s just a person that loves her life. She’s unapologetic, and I love that.

That conversation ties back into what we’ve seen on Grey’s this season, with Addison fighting for reproductive rights. Was the Roe decision an impetus for you to return, or was it something you were already planning to do?

We were always planning for me to come back and dip in and out. When Krista Vernoff and I spoke about the possibility of me coming back for Season 19, we were both really excited to have the opportunity to explore everything that's going on in America with women’s health and reproductive rights and restrictions, and how Addison could influence that and hopefully really connect with people in the culture.

Addison and Madeline are both powerful characters — they’re glamorous and passionate about their careers. Is that a conscious choice of yours?

Both those roles came to me, but I do see a pattern. I play these strong characters that can be a little polarizing and that [have] this outsider archetype that comes in from stage right and is like, “Hey! I’m here to be the fly in the ointment.”

More like this
At 28, Debra Jo Rupp Was Living A Much Different '70s Show
By Grace Wehniainen
'That '90s Show' Star Callie Haverda Got Advice From Mila Kunis & Ashton Kutcher
By Brad Witter
'Bling Empire: New York’ Star Dorothy Wang Wants To Try 'The Simple Life'
By Alyssa Lapid
At 28, Rosie Perez Risked Her Career To Stop Playing Stereotypes
By Gabrielle Bondi
Get Even More From Bustle — Sign Up For The Newsletter
From hair trends to relationship advice, our daily newsletter has everything you need to sound like a person who’s on TikTok, even if you aren’t.