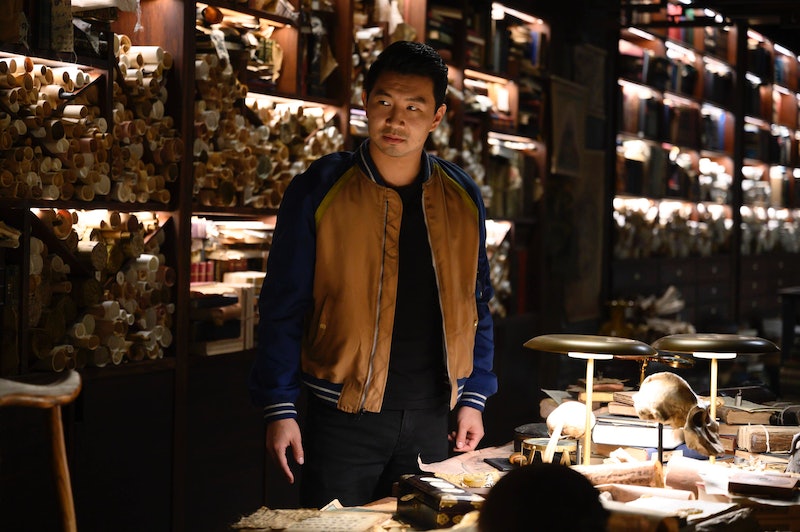 Following Shang-Chi’s epic introduction into the Marvel Cinematic Universe, and with even more heroes to come in November’s Eternals, the newest lineup of Avengers continues to take shape in an exciting way. But... is Shang-Chi an Avenger? Will the Eternals be? What about Bucky Barnes or the Guardians of the Galaxy? For new and long-running characters alike, the question of who makes up the new Avengers roster can be a little tricky because things aren’t quite as clear as they were in 2012’s team-up, when the original six heroes fought together for the first time.

By this point in the MCU, the label of “Avenger” is somewhat fluid. As implied by Steve Rogers’ iconic rallying cry moment in Avengers: Endgame, it can be used to cover pretty much anyone who is fighting for good and is somehow connected to the original initiative, even by proxy (like if you’re Steve’s formerly brainwashed bestie). Then again, there are also plenty of references to the Avengers as a uniquely defined in-group, like when Tony Stark told an incredulous Bruce Banner that the Avengers had broken up in Infinity War, or when he basically knighted Peter Parker in the same movie.

The Marvel Comics make the distinction a little clearer. For example, Shang-Chi did fight alongside familiar figures as part of the Heroes for Hire but wasn’t officially considered an Avenger until Tony and Steve decided to recruit him, which went down in the 2012 Avengers comics run. On-screen, of course, there’s not nearly as much time for formalities. As far as the MCU goes, Shang-Chi’s initation process seems to have been fast-tracked.

Even before the movie came out, the titular hero was tagged as “Marvel’s New Avenger,” and the events of the movie certainly point to Shang-Chi being welcomed into the fold in a major way (the two credits scenes foreshadow future events). A similar clue can be found in the first Eternals trailer, in which Ikaris playfully volunteers himself as the next Avengers leader. Though it’s taken as a joke, the implication seems to be that the super-powered “good guys” can be part of the team if they want.

So on the cinematic side of things, it’s fair to assume that any of the heroes we’ve met so far fight under the Avengers mantle — even if they have their own respective side hustles to work on between team-ups. By that (admittedly generous) definition, here are a few essential Avengers and Avengers-adjacent names, beginning with the group that fought most closely alongside the original team before and during the Civil War era: Sam Wilson/Captain America, Bucky Barnes, Rhodey, Peter Parker, Thor, Clint Barton (though given the pass-the-torch vibes of the upcoming Hawkeye series, it seems he could bow out soon), Hulk/Bruce Banner, Scott Lang, and Wanda. Of course, Wanda’s membership card might be revoked for now due to recent events.

Then, there are characters who joined the Avengers in their fight against Thanos in Endgame or joined the fold more recently in Phase 4 of the MCU. Doctor Strange and Wong both seem to be taking on a larger role in the group of heroes, for example. As the Asgardian king and close friend to Thor, Valkyrie also seems like a key fighter for the group.

Though it’s not certain if or how Shuri will take up the Black Panther mantle, her extreme intelligence and tech savviness have already made her an essential addition to the lineup. Fellow Wakandan Okoye is also being primed for a larger role alongside the Avengers, it seems, from her brief but iconic turn in What If...?’s zombie episode to her reported Disney+ series in the works.

Carol Danvers was one of Nick Fury’s earliest Avengers recruits, though she never actually fought with the team until Endgame. But she seems to be getting more involved with the group and is set to join WandaVision’s Monica Rambeau in the upcoming The Marvels movie. In the comics, Monica is a superhero known as Spectrum and becomes one of the Avengers’ most important members after first seeking out their help with her newfound powers. Per Marvel, she befriends the Wasp, aka Hope van Dyne, along the way. Unlike Scott, Hope didn’t work with the Avengers until Endgame — expect that to change soon, especially since the Kang-level threat in Ant Man and the Wasp: Quantumania will surely warrant backup.

And of course, the latest Avenger, Shang-Chi, has been quickly welcomed onto the team. Meanwhile, the Guardians of the Galaxy and the Eternals are two groups that can fight super-powered evil on their own — but each, surely, has an open invitation to all things Avengers.

Much like the comics’ Avengers Disassembled run led to the formation of the new Avengers, it seems that the world-changing events of Endgame will have a similar ripple effect on the MCU’s Phase 4 and beyond. With enormous enemies like Kang the Conqueror on the way, it’s good to see the new team taking shape.

As for when fans will actually see the Avengers assemble again, that’s still TBD. As Marvel Studios President Kevin Feige told Collider of a potential Avengers 5, the creative powers that be are still taking their time to cultivate new relationships. “I think we want there to be a reasonable amount of time from the Endgame to start a new saga, which is already underway and already started,” Feige said this August. “And then you need time, as you did in Phase 1, to build that saga before you start bringing everyone together.”

More like this
How To Stream 'Thor: Love And Thunder'
By Arya Roshanian
Zendaya Shares Intimate Photo With Tom Holland To Wish Him A Happy Birthday
By Bustle Editors
An 'Everything Everywhere All At Once' Star Just Joined The 'Loki' Season 2 Cast
By Grace Wehniainen
The First 'Percy Jackson & The Olympians' Teaser Comes With An Ominous Warning
By Grace Wehniainen
Get Even More From Bustle — Sign Up For The Newsletter