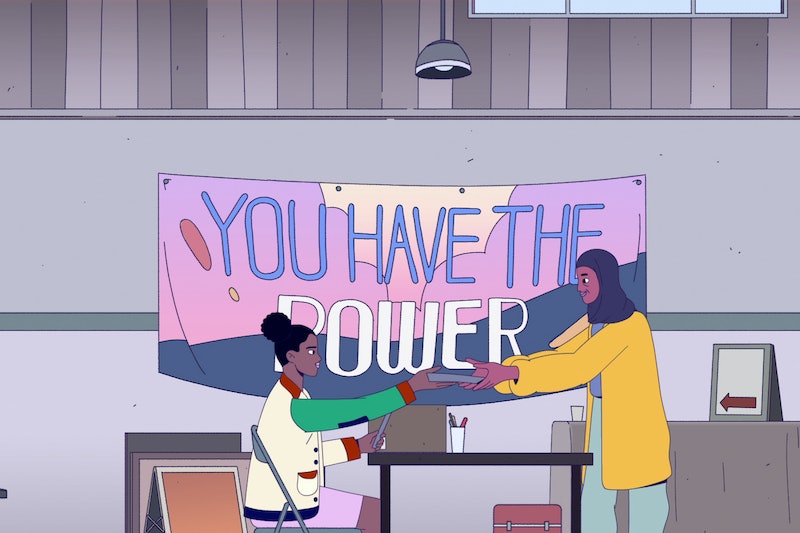 Barack and Michelle Obama’s latest Netflix project produced via Higher Ground Productions aims to inform young people about their basic rights and duties as American citizens. Similar to a modern-day Schoolhouse Rock!, which spawned educational bops like “I’m Just A Bill” about the United States’ legislation process, “The Great American Melting Pot” about immigration, and “Tyrannosaurus Debt” about the budget deficit and national debt, Netflix’s animated We The People series will feature original songs from celebrity musicians to break down complex topics like taxes, voting, and the power of the people. Here’s everything we know about the Obamas’ latest Netflix series, from its release date to which famous singers are involved.

Netflix’s We The People Plot & Trailer

Each three-minute episode of We The People’s Season 1 will combine music and animation to explain basic United States civics lessons to a young audience in unique, catchy ways. Combining several different animation styles and a slew of high-profile musicians, the series’ initial 10-episode run will inform viewers about topics including citizenship, voting, taxes, education, and more.

We The People is created by Chris Nee, who previously made Disney’s Doc McStuffins. Executive producing the series are Black-ish creator Kenya Barris and the Obamas through their Higher Ground Productions company, which crafted the American Factory, Crip Camp, and Becoming documentaries for the streaming service, as well as the 2020 children’s series Waffles + Mochi. Other executive producers include Tonia Davis and Priya Swaminathan for Higher Ground, Nee for Laughing Wild, and Barris for Khalabo Ink Society. Additionally, Ada Chiaghana, Erynn Sampson, and PeeDee Shindell will produce the series. Serving as directors for We The People are Peter Ramsey, Trisha Gum, Victoria Vincent, Benjy Brooke, Mabel Ye, Tim Rauch, Jorge R. Gutierrez, Daron Nefcy, Everett Downing, and Kendra Ryan.

On June 2, Netflix released the series’ official trailer, which previews each lesson, the animation styles, and the many musicians featured in We The People.

Who Is Making Music For We The People?

According to the trailer, musicians crafting original songs for We The People include H.E.R. with “Change,” Brandi Carlile with “Speak Your Mind,” Cordae with “Taxes,” Bebe Rexha with “American Citizen,” KYLE with “Link Up,” and Lin Manuel-Miranda, Kristen Anderson-Lopez, Robert Lopez, Daveed Diggs, and Alabama Shakes’ Brittany Howard with “Checks and Balances.” Additional musicians featured are Janelle Monáe, Adam Lambert, Andra Day, and poet Amanda Gorman.

Netflix’s We The People Release Date

Fittingly enough, Season 1 of Netflix’s We The People is set for release on July 4, aka the United States’ Independence Day. But first, the series will have its world premiere at the AFI Docs film festival on June 24.

Alongside the trailer’s release on June 2, Barack Obama tweeted: “Michelle and I are excited to share our latest show from Higher Ground: We The People. Some of our favorite artists got together with amazing animators to remix civics—and the result is a lot better than what we had in school.”

More like this
'That '90s Show' Star Callie Haverda Got Advice From Mila Kunis & Ashton Kutcher
By Brad Witter
Ashton Kutcher Wants Danny Masterson “To Be Found Innocent” In Rape Retrial
By Jake Viswanath
At 28, Debra Jo Rupp Was Living A Much Different '70s Show
By Grace Wehniainen
'The Crown' Season 6 Has Suspended Filming "Out Of Respect" For The Queen's Death
By Bustle Staff
Get Even More From Bustle — Sign Up For The Newsletter
From hair trends to relationship advice, our daily newsletter has everything you need to sound like a person who’s on TikTok, even if you aren’t.