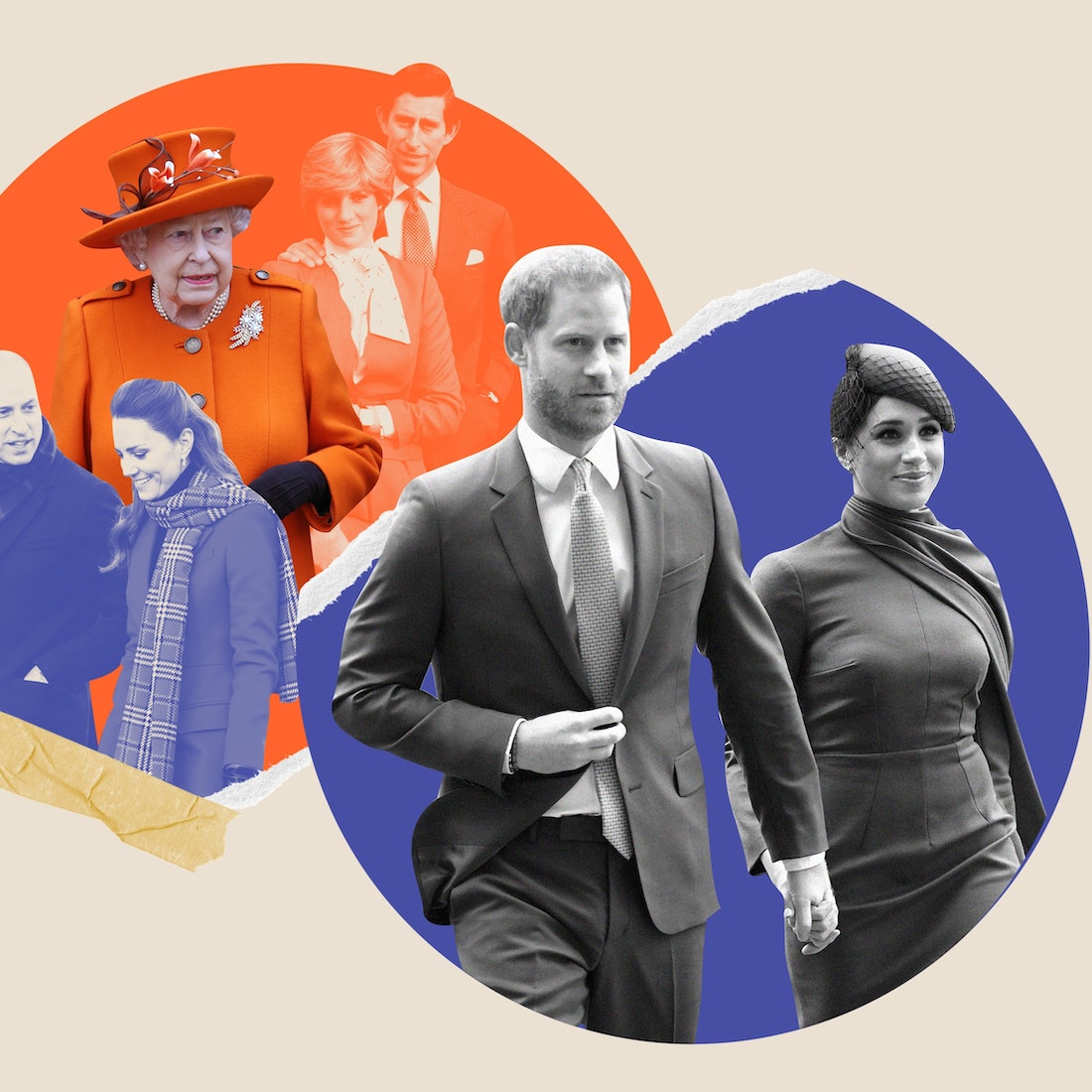 Extreme exclusivity, bizarre rules, secrecy, lies, isolation, psychological warfare… If you put “cults” and “the royal family” on either side of a Venn Diagram, these points would fall squarely in the middle.

Or, if you interpret the word “cult” like I do, that Venn diagram would look more like a circle. As Americans, we tend to think of cults as fanatical fringe groups, full of “brainwashed” minions wearing white robes and flower crowns, gathered around a wild-eyed preacher on a rural compound somewhere. But the the concept of a “cult” is incredibly subjective; even sociologists and religious scholars struggle to pin down the differences between cults, religions, and intense social groups.

I grew up fascinated by all things cult, mostly because of my dad, who was forced to join an infamous ‘70s-era “Utopia” called Synanon at age 14. (Think, NXIVM meets Jonestown meets a really big AA meeting… but with more yelling?) Over the past two years, I’ve researching cults of all stripes for my new book Cultish: The Language of Fanaticism, and learned that cult-like influence imbues spaces that look nothing like cults in the movies: our fitness studios, our Twitter feeds, our toxic relationships, our start-ups that put the “cult” in “company culture,” and, yes, the British monarchy.

When Meghan Markle and Prince Harry’s Oprah Special aired on CBS earlier this year — and when Harry’s The Me You Can't See episode with Oprah came out in May — I felt like I was watching interviews with people who’d survived a cult. Not a Synanon-level one. But Meghan touched on half a dozen pieces of evidence supporting my theory that cultish ideology influences communities of all stripes.

Now, it must be said that the stakes and consequences of getting involved with the royal family (either as a member or an admirer) are not the same as joining groups like the Manson Family. First of all, you can’t really compare a bare-bones commune in the woods to shacking up in a literal palace with all the money and resources you could ever need. And the royal family is clearly structured differently from the most dangerous cults in history: there’s no singular, all-powerful, Keith Rainere-type leader at the top, physically endangering people and breaking his own rules willy-nilly. The Queen may be considered the royal family’s leader, but she’s just as bound to tradition as anyone.

And yet, this lack of obvious power center is also part of what makes the “cult” of the royal family so insidious. When the Queen issued a statement in response to the interview’s allegations claiming that “some recollections may vary,” she also said the issues raised would “be addressed by the family privately.” But this isn’t just a private family. In their interview with Oprah, Meghan and Harry referenced “the Firm,” a sort of pseudo-Royal Deep State — a hazily defined force that secretly controls both the royals and the 400 employees who support them. And there is the army of royal superfans, who are under some degree of cult-like influence, as well. In a sense, the royal family exists on a cult spectrum all its own.

On the extreme end: when someone reflects on their experience as a part of any group and says, as Meghan did, “It became almost unsurvivable” and “I just didn’t want to be alive anymore,” that’s a major red flag.

Here, a breakdown of six more red flags that Meghan and Harry have raised since breaking away, proving that the royal family is a bit more cultish than some of us might think.

Strict Rules and Protocols… and Hypocrisy

The first time Harry asked Meghan, “Do you know how to curtsy?” she thought it was a joke.

But curtsies and dress codes, carefully orchestrated appearances, “royal orders” (symbolic, NXIVM-style sashes and brooches, doled out as a reward for service) — these are just a few of the exhaustive rituals that royals are required to participate in. A classic cultish move is to assert control over a member by filling their plate with time-consuming tasks and formalities, leaving them no time to ask questions or raise concerns. The rituals go uncontested, and they must be abided by — at least, until someone at the top needs to break them.

When my dad was in Synanon, there were countless arbitrary rules, regulating everything from members’ weights and hairstyles to their spouses and jobs. These rules applied to everyone but their charismatic leader, who was allowed to change the rules whenever he wanted. This is similar to the hypocrisy Meghan described, when she recalled how the royal family refused to defend her against the venom of the British press, but often did just that for Kate Middleton.

Inability to Express Doubt or Push Back

“Were you silent, or were you silenced?” Oprah asked Meghan. After a contemplative pause, the Duchess responded, “The latter.”

One of the cult scholars I spoke to for my book, psychologist and The Cult of Trump author Steven Hassan, told me that any legitimate group will stand up to scrutiny. Any healthy religion, company, or social group will allow its members to ask questions and express reservations — or at the very least voice the truth. An unhealthy group, by contrast, will limit your ability to speak at all, and even encourage you to lie. This seems to be the royal family’s M.O. — after all, the Queen’s motto has always been “never complain, never explain.”

“Everyone in my world was given a very clear directive to always say ‘no comment’ [to the press],” Meghan told Oprah. For example, when vitriolic rumors spread that Meghan had made Kate cry at a dress fitting event in 2018 — even though the exact opposite story was true — neither she nor her allies were allowed to speak out and correct the story. Cults are quick to turn on their own, as the power center of a cult (which, perniciously, is basically impossible to identify in the royal family) is always going to be more important than any individual follower.

This silencing can also be a form of gaslighting, because when no one is taking your truth seriously or even allowing you to express it, you start to question your own perception of reality. Culty? I think yes.

“You turn over your passport, your driver’s license, your keys.”

“I hadn’t left the house in months.”

“I could not feel lonelier.”

These sound like quotes from the memoir of an ex-Scientologist, but they came straight from the Duchess of Sussex. A cult can’t exert its power without quickly separating members from the outside world and enforcing strict parameters on their freedom. In Meghan’s case, she told Oprah that she wasn’t allowed to make her own decisions about anything. Like all royals, she wasn’t permitted to express political opinions or vote. In her Oprah interview, she described how she was forbidden from going out to lunch during an unflattering media frenzy, even though she hadn’t left the palace in months. More alarmingly, after she began experiencing suicidal thoughts and approached the so-called “institution” for help, they refused to connect her to any resources.

For his part, Harry talked about his father and brother almost like a former NXIVM follower speaks about their family members still inside: “My father and my brother, they are trapped,” he told Oprah. “They don’t get to leave. And I have huge compassion for that.”

Insidiously, in a cult-like environment, this level of control doesn’t seem like isolation — at least not at first — because the group paints it as a privilege. They love-bomb followers with flattery and attention, leading them to believe that only the most special, superior people are granted this experience. Then, when members complain about later mistreatment, the cult leaders turn it around — asserting that if someone lucky enough to be included in the group isn’t happy, then there must be something wrong with them. Without any support on the outside, followers decide the cult leaders must be right, that they’ll make the best of it, and stay.

In Synanon, defectors (labeled “splittees”) were not only demonized, they actually risked life and limb if they fled. (In the late 1970s, several splittees were tracked down and brutally beaten by the cult’s paramilitary group). While the exit costs for royals are not life-threatening, they’re no cake walk either.

Harry — who faults the vulturous paparazzi for the car crash that killed his mother, Princess Diana — referenced an unspoken contract between the tabloids and the royal family, which prevents insiders from escaping. The monarchy survives by maintaining a positive relationship with the British tabloids, hoping that the headlines will keep the family in the public’s favor. Harry believes that his father and other members of the family never even considered leaving, lest it make the press to turn on them. Disastrous coverage could theoretically turn the public against them, inspire anti-royalists, and bring about the end of the monarchy — the institution they were born into and tasked with preserving. “There is a level of control by fear that has existed for generations,” Harry said. “I mean, generations.”

“Us vs. Them” Attitudes

Cults maintain power by creating enemies; whenever something goes wrong, cult higher-ups redirect negative attention onto lower-ranking followers and outsiders. (In Synanon, my dad saw this unfold nightly during an activity called the “Synanon Game” — a ritual wherein members were forced to subject each other to hours of vicious personal criticism. It was pitched as group therapy, but really it was a means of social control.)

In the royal family’s case, while superfans rallied around the tabloids’ “Kate Middleton vs. Meghan Markle” feud (and other violent narratives), the royals and their communications reps sat back, allowing the public to condemn Meghan and continue worshipping them. Though Meghan was told that palace staffers were doing everything in their power to protect her from the press, in reality, they appeared to be more than comfortable positioning the independent, outspoken American as a contemptible outsider. A similar breed of royal bitterness that plagued Princess Diana over two decades ago. As Michelle Ruiz reported in Vanity Fair, the royals expect a lot from the women who marry into their clan. “But if they’re too sparkly, the palace, like a sullen teen, gets jealous and resentful.” And more than willing to throw perceived outsiders to the wolves.

“I did anything they told me to do, because it was always through the lens of, ‘you will be protected,’” Meghan told Oprah. “Not only was I not being protected, but they were willing to lie to protect other members of the family.”

“It’s nothing like what it looks like,” was one of Meghan Markle’s first admissions to Oprah during their interview. Some might argue that the royal family can’t be a “cult,” because cults are evil by definition. But no cult is 100% evil — if they were, no one would ever join or stay. If you’ve ever been in a toxic relationship, this might ring a bell. Everything seems great in the beginning, a lot of grandiose promises are made, and then slowly, over time, things get more sinister — until one day, you look around and wonder how things got so bad.

Steven Hassan describes how dangerous cults use three kinds of deception: omission, distortion, and outright lies. They paint a rosy picture and fail to tell you upfront what’s really required of your membership. Sound familiar?

Amanda Montell’s book, Cultish: The Language of Fanaticism, is now available for preorder in hardback, e-book, and audiobook.

'Cultish: The Language of Fanaticism' by Amanda Montell
Bookshop