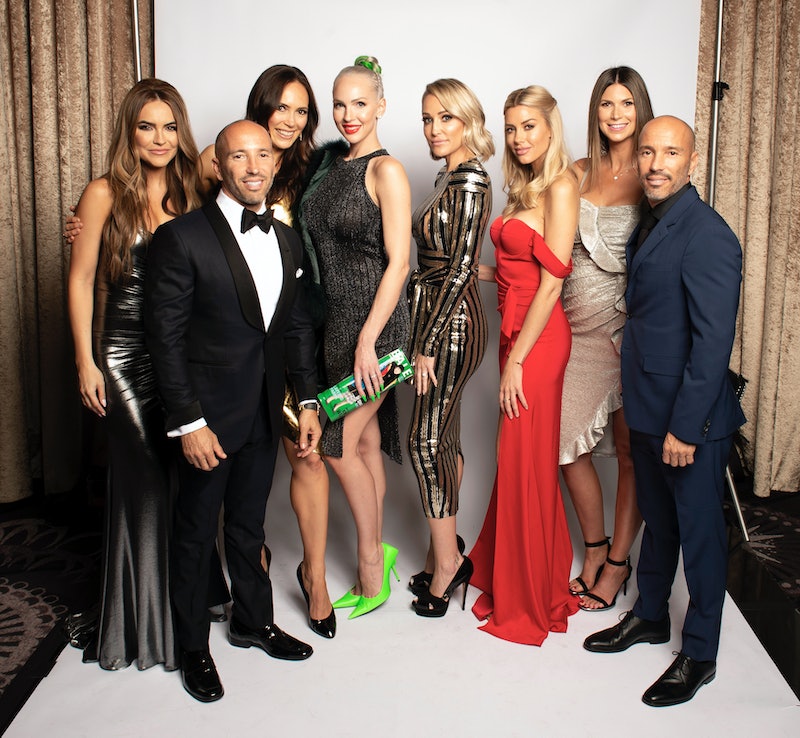 Season 4 of Selling Sunset is finally set to premiere on Nov. 24 on Netflix after nearly a year-and-a-half-long break between seasons. Created by Adam DiVello (The Hills), the reality series centers on Los Angeles-based high-end brokerage firm The Oppenheim Group, founded by twin brothers Jason and Brett Oppenheim, as well as several of its real estate agents: Chrishell Stause, Christine Quinn, Mary Fitzgerald, Davina Potratz, Heather Rae El Moussa (née Young), Maya Vander, and Amanza Smith. With an Emmy nomination under its belt, Selling Sunset has earned extreme fanfare since its 2019 premiere for its unique blend of real estate porn and top-tier reality drama.

The series’ first two seasons largely followed Chrishell’s initial hiring to The Oppenheim Group, marriage to actor Justin Hartley, and often-turbulent colleagueship with Christine and Davina. Additionally, Mary’s relationship with and subsequent engagement to model Romain Bonnet — which also sparked a fight with Davina — was a focus. Along the way, Amanza joined the firm as a home stager-turned-agent, and Maya gave birth to her first child. Ahead of Season 4, let’s recap each main cast member’s storyline and see where they left off at the end of Season 3.

At the start of Season 3, Chrishell and Justin were happy newlyweds and had recently purchased their dream home together. In Episode 3, Mary referred to the pair as “couple goals,” which prompted Chrishell to say she’d expected to be a mother by now, considering she married Justin in 2017. Of course, the extensive relationship discourse was all leading up to the Episode 6 reveal that Chrishell and Justin were getting divorced.

Detailing the split to Mary, Chrishell said she fought with Justin on a phone call the morning he filed for divorce and hadn’t seen him in person since, though she didn’t expect it’d end there. According to Chrishell, he then filed and informed her via text. “People want answers, and I f*cking want answers,” she tearfully told her colleague. In a conversation at Chrishell’s house, she told Amanza she never came up with a backup plan for her life, as she was still in love with Justin when he divorced her.

After referring to his rising This Is Us fame as a potential reason for their breakup, Chrishell left Los Angeles to visit her family in St. Louis. While she received comfort and care from her loved ones, her colleagues gathered to chat about the divorce behind her back. Speaking to her family, Chrishell revealed she thinks Justin’s mind was made up about the divorce before their last fight.

In the Season 3 finale, Chrishell reluctantly attended Christine’s wedding and was confronted with questions about her situation, mainly from Davina. Through with hearing others’ opinions on her divorce, Chrishell ended up taking off her microphone and leaving the wedding.

In Episode 1, Christine hosted her birthday party in a West Hollywood restaurant and invited a tarot card reader, who gave everyone slightly shady readings — except Christine, who she said simply doesn’t like drama. (This prompted an eye roll from nearly everyone else in the room.) On the business side, Christine pursued a $5.495 million listing in the Hollywood Hills and began planning a broker’s open with free “Botox and burgers” for every attendee. Monika, her co-listing agent, advised against the idea, but Christine went through with it anyway in Episode 2.

During a lunch outing in Episode 4, Christine, Maya, and Heather discussed feeling like Mary was receiving more listings due to favoritism from Jason, her ex-flame. Later in the episode, Christine laid out the plans for her “gothic winter wonderland” wedding to fiancé Christian Richard. She wanted it to take place in a cathedral with snow, a variety of pasta and truffles, and a white cake that “bleeds” with strawberries when cut. What she didn’t want, however, was a bridal party: “No b*tches, no buffet, no speeches.” Oh, and it all had to happen in two months.

In Episode 5, Mary sat down with Christine to discuss the tension between them. Christine admitted she felt Mary’s closeness with Amanza was driving a wedge in between them, despite Mary and Amanza’s friendship going back 20 years. Mary proposed they metaphorically start their friendship over on a new slate, Christine apologized, and they seemingly made up. At Chrishell’s charity auction open house event later in the episode, Christine and Amanza attempted to resolve their fight about Mary, repeatedly mentioning the metaphorical “wedge” being driven between them, but both end up walking away unsatisfied.

Following the reveal of Chrishell’s divorce in Episode 6, Christine and Davina repeatedly speculated about Justin’s side of the story. They complained Chrishell was too guarded and theorized about other problems in their marriage. The following episode, they both claimed Justin was a gentleman when they met and suggested Chrishell should’ve seen the split coming.

In the season finale, Christine chatted about last-minute bridal drama with Davina and Heather prior to her “gothic winter wonderland” wedding, noting that her breasts were too big to fit in her dress, so she needed extra alterations. Additionally, she revealed she’s been throwing up but insisted she’s not pregnant. Somehow she found time to show a house to Queer Eye star Karamo Brown before her ceremony, but he was unsatisfied with the bedroom’s low beams, as they’d prevent him from having physically-demanding acrobatic sex. Finally, the wedding was complete with her sparkly black gown, guests dressed in white, white swans for the ceremony, black swans for the reception, a faux blizzard, and the bleeding cake.

At the start of Season 3, Davina was still struggling to sell that infamous $75 million home. In Episode 2, Christine joined the listing and — unbeknownst to Davina — gave her fiancé, Christian, a tour of the mansion, which made for an awkward encounter between Davina and the homeowner. Later, Davina confronted Christine about her secret tour but didn’t receive an apology, so the encounter ended in a sore spot. At Brett’s housewarming party in Episode 3, she asked to extend the listing and was immediately shot down.

Toward the end of the season, most of Davina’s storyline revolved around her and Christine’s (seemingly uncalled for) praise of Justin following Chrishell’s divorce. After they recalled Justin being a gentleman the first time they met, Davina got called out for never having met Justin. At Christine’s wedding in the season finale, Davina directly confronted Chrishell about wanting to hear both sides of the story, leading Chrishell to storm out. Davina continued to insist she was right for speaking her mind to Chrishell, though nearly everyone else disagreed.

Season 2 largely focused on Mary’s wedding, and aside from getting Botox at Christine’s “Botox and burgers” broker’s open, her Season 3 storyline took a backseat until Episode 3. During her “couple goals” conversation with Chrishell, the two had a heart-to-heart about married life, wanting children, and Mary’s thoughts about freezing her eggs. Later in the episode, she attended Brett’s housewarming party and announced she visited a fertility doctor, who informed her she’s in a great place to have children with Romain.

After her colleagues complained about Jason’s favoritism toward Mary in Episode 4, the entire Oppenheim Group team gathered for a Thanksgiving dinner. There, Jason offered to bring Mary onto a $9.5 million listing on Beverly Hills’ Alpine Drive, which visibly upset the other women.

Following Mary’s fruitful, apologetic conversation with Christine, everyone attended Chrishell’s charity auction open house in Episode 5, where Christine and Amanza’s failed resolution went down. Additionally, Mary discussed learning that Brett and Jason brought women to their hotel suite after Romain’s bachelor party. Having previously asked Romain not to do so, she was upset, though he said it wasn’t his decision and he didn’t have relations with any of the women. They made up, but she still felt betrayed.

In Episode 6, Mary confronted Romain about his bachelor party. While it quickly turned into a fight, they seemed to make up and resolve the situation.

News of Chrishell’s divorce broke in Episode 7, and after hearing Christine and Davina speculate about Justin’s side of the story, Mary and Amanza stepped in. “There are not two sides,” Mary said. “The right side is Chrishell’s side because she’s our friend.” She continued feuding with Davina into the season finale, in which she informed Romain of the drama. He was unsurprised, as he considers Davina a “f*cking snake” due to their differences from Season 2.

Finally, after one unsuccessful showing in Episode 7, Mary closed a deal on the Alpine Drive listing.

Heather’s main storyline also began in Episode 3, when she and Amanza took on a $3.5 million listing together in tandem with The Oppenheim Group’s new concierge service, which stages and renovates homes for the owners. They had to work quickly, as the owners were already in escrow on a new home — but Heather secretly wasn’t happy about working with Amanza because of her unprofessional and often-tardy working habits.

After taking part in the group complaints about Jason’s favoritism towards Mary in Episode 4, Heather found out her and Amanza’s listing suffered water damage, calling for $5k in repairs. Then, Amanza missed a staging appointment with the owners due to a court date, leaving Heather to pick up the extra work. Despite their rocky start, the pair’s listing went smoothly from there, and they sold the property in Episode 7.

At Christine’s wedding in the season finale, Chrishell confronted Heather about commenting on her divorce in an Us Weekly interview. Heather apologized, claiming she was caught off-guard by the question, which Chrishell understood. In addition, Heather caught the coveted wedding bouquet — perhaps signaling toward her nuptials.

In Episode 1, Maya made a major announcement: She was around three months pregnant with her second child. Then, it was revealed in Episode 3 that she was having a girl.

Following her, Christine, and Heather’s discussion about Jason’s favoritism toward Mary in Episode 4, Christine asked Maya if she wanted to leave The Oppenheim Group, but the episode ended before her answer was heard. In the following episode, she discussed potentially obtaining her broker’s license in Florida and expressed interest in opening a new Oppenheim Group office there. At Chrishell’s charity auction open house, Maya told the group she closed a deal on a $4 million home in Beverly Hills.

In the season finale, Maya told Jason about wanting to get her broker’s license and open an office in Miami. While he said he couldn’t commit to the idea, he’d think about it, as he didn’t want to lose her. He mentioned that a second Oppenheim Group office would likely come to Orange County or New York before Miami.

Throughout Season 3, Amanza continuously dealt with her husband’s absence and the ongoing fight for custody of her children. In Episode 3, she took on the $3.5 million listing with Heather, which proved difficult as she missed a staging appointment to attend a court date. However, they eventually sold the home, and Amanza also successfully sold one of her own listings. Furthermore, Amanza’s tight-knit bond with Mary sparked the “wedge” fight with Christine, which wasn’t resolved by the season’s end.

More like this
Brittany Snow Files For Divorce From Tyler Stanaland After 'Selling The OC' Drama
By Grace Wehniainen and Radhika Menon
'Bling Empire: New York’ Star Tina Leung Has A Superhero Alter-Ego
By Alyssa Lapid
'The Queen’s Gambit' Season 2 Tweet Wasn’t From Anya Taylor-Joy
By Mary Kate McGrath, Jack Irvin and Grace Wehniainen
'Bling Empire: New York' Star Nam Laks Is The “Blair Waldorf Of Thailand”
By Alyssa Lapid
Get Even More From Bustle — Sign Up For The Newsletter
From hair trends to relationship advice, our daily newsletter has everything you need to sound like a person who’s on TikTok, even if you aren’t.