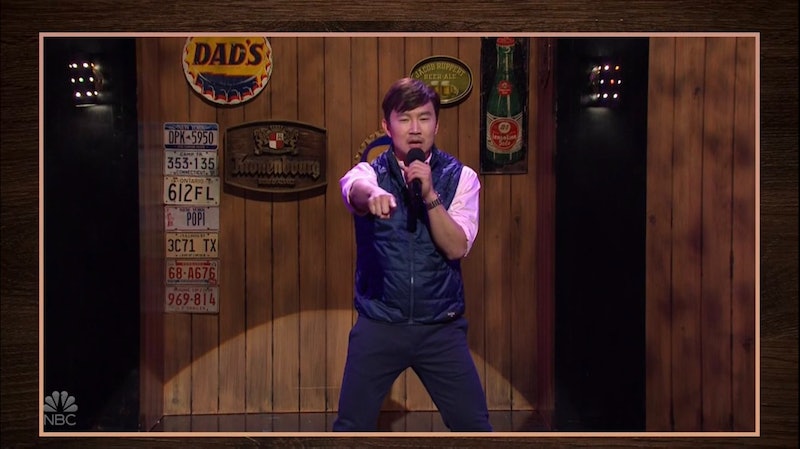 Simu Liu wasn’t the musical guest on Saturday Night Live — Saweetie was — but that didn’t stop the first-time host from showcasing his singing chops during the Nov. 20 episode. Liu’s opening monologue was short. He mostly recounted his true-to-life story of asking Marvel for an Asian superhero via Twitter in 2014 and working kids’ parties as Spider-Man before making history as the Marvel superhero. Though his spiel ended with a badass, “I’m Shang-Chi, b*tch,” it was his take on a Backstreet Boys classic that stuck the most.

In the “Karaoke Recap” sketch, Kenan Thompson and Chloe Fineman replayed the most memorable performances in a dingy karaoke spot in Wilmington, North Carolina, and Liu wowed with a mic. As the “Finance Bro Trying to Get Laid,” the Shang-Chi and the Legend of the Ten Rings actor stepped on stage wearing a vest with a popped collar (of course) and then began his song number by dedicating it to “all the ladies in the house.” He added, “I don’t like this song but I know you do,” as the intro to “I Want It That Way” started playing.

The actor, who sometimes serenades his fans on Instagram and who previously told Bustle he wanted to be in a Marvel musical, nailed his short performance, even doing some of the boy band’s iconic dance moves. “I make a lot of money,” he injected in character between verses.

The sketch also featured hilarious karaoke performances from the rest of the cast. Bowen Yang, as The Guy Who Was Doing Great Until the High Notes Came In, did a wonderful job singing A-ha’s “Take On Me.” Until the last note which he fell quite flat. Ego Nwodim, as The Woman Who’s Been Overserved, gave a drunken and slurred rendition of “Su Soppa Layla” (read: Sade’s “Smooth Operator” in sober speak.) Pete Davidson also took to the mic, singing “Mad World” as The Quiet Guy in the Hoodie. (It wasn’t his only song number that night.) After, Melissa Villaseñor and James Austin Johnson nailed their impression of The Simpsons as they performed an “Islands in the Stream” duet.

In the end, it was Cecily Strong who was the night’s diva, belting out her rendition of Whitney Houston’s “I Will Always Love You,” despite claiming that “a friend” signed her up.

More like this
Hilary Duff's Husband Matthew Koma Has Her Name Tattooed On His Butt
By Jake Viswanath and Stephanie Downs
Michael B. Jordan Tackled His "Public Breakup" With Lori Harvey On 'SNL'
By Brad Witter
The Black Lotus Staff Has "Had Enough" In The 'White Lotus' Spoof From 'SNL'
By Brad Witter
Ashton Kutcher Wants Danny Masterson “To Be Found Innocent” In Rape Retrial
By Jake Viswanath
Get Even More From Bustle — Sign Up For The Newsletter
From hair trends to relationship advice, our daily newsletter has everything you need to sound like a person who’s on TikTok, even if you aren’t.