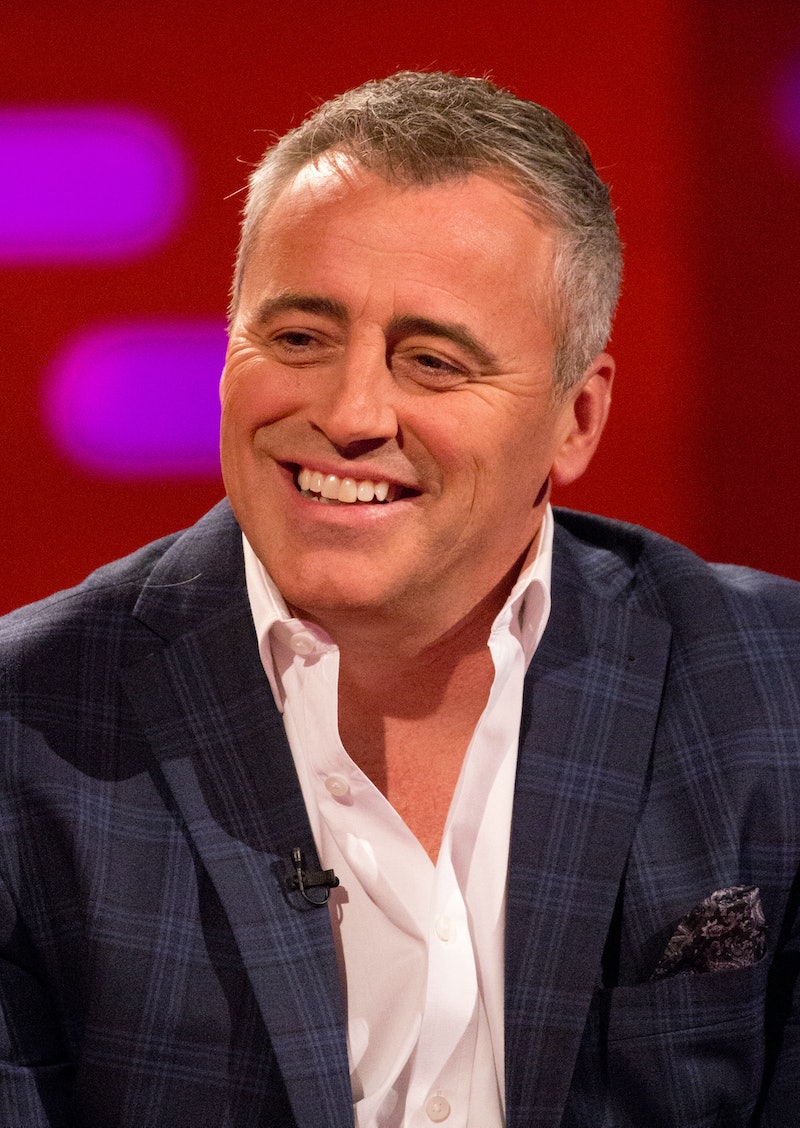 HBO Max’s Friends: The Reunion is set to air on May 27 after a year of delays due to the pandemic, and we are beaming at the thought of seeing Jennifer Aniston, Courteney Cox, David Schwimmer, Matthew Perry, Lisa Kudrow, and Matt LeBlanc back in their famous pseudo-New York City apartments. The five stars that ruled the late ’90s and early aughts will be joined by the stars of today, including Justin Bieber and Lady Gaga as well as previous Friends actors like Reese Witherspoon and Christina Pickles. After being stuck inside for a year, fans are wondering if all of the famous faces in one room could spark some romantic chemistry. Ahead of the reunion special, let’s take a look at Matt LeBlanc’s relationship history and current dating status.

Since 2016, the 53-year-old actor who played Joey Tribiani on Friends has been romantically linked to 33-year-old Irish television producer Aurora Mulligan. The pair presumably met on the set of BBC’s Top Gear, a non-fiction series featuring automobile reviews and races; Mulligan executive produces the series, and LeBlanc co-hosted it from 2016 to 2019. They were first spotted together at the 2017 Hickstead Derby, where an insider told The Sun: “They were very tactile, and Matt seemed to be very taken by Aurora as he laughed chatted intimately with her. Aurora just kept laughing at all his jokes and is clearly besotted with the American superstar.”

LeBlanc and Mulligan made another public appearance at the London premiere of Top Gear’s 25th season in February 2018, but otherwise, the pair tends to keep their relationship private; Mulligan's Instagram is private, and she doesn’t make any appearances on LeBlanc’s page. Due to their low profile, it’s unclear whether or not the couple is still together, though there’s been no news of a split.

Prior to Mulligan, LeBlanc was romantically involved with several other figures in the entertainment industry. In fact, Entertainment Weekly reported that he only went to his first acting audition because he was following a “cute girl.” “I’d be banging nails in the snow if it wasn’t for her,” the actor told the publication. “I’d have been a carpenter.” Around the start of his television career in 1989, LeBlanc dated actress Teri Copley for about half a year, during which they attended several events together, including the grand opening of Manhattan West restaurant, where they were photographed.

Following his relationship with Copley, he had a rumored fling with Kate Hudson in 1996 after they were spotted kissing at a bar. It’s unclear how involved they were, which is probably for the best considering LeBlanc was 28 and Hudson was 17 at the time. In March 2020, Real Housewives of Beverly Hills star Brandi Glanville told comedian Danny Pellegrino on his podcast that she had an unfavorable romantic encounter with the Friends star prior to her marriage with ex-husband Eddie Cibrian that began in 2001. “We went back to his house, he let his dog lick his ice cream, and I was out,” she claimed. “I was like, ‘Nope.’ I was totally gonna have sex with him. Then the dog licked the ice cream, and he licked the ice cream, and I was like, ‘I can’t.'”

In 1997, LeBlanc began dating British-American model Melissa McKnight, to whom he proposed a year later. The pair then married in 2003, welcomed a daughter named Marina in 2004, and divorced in 2006, citing irreconcilable differences. “It was very sudden,” the model’s friend Kelly Phillips told People of the split. “She was absolutely blindsided by what transpired.” Soon after their breakup, LeBlanc began dating Andrea Anders, his co-star from the Friends spin-off Joey. Their relationship lasted eight years, and it reportedly ended in 2015 after he was caught cheating on her at a Halloween party, though his representatives denied the infidelity in a statement to E! News.

One blip in LeBlanc’s relationship history is a wild rumored fling with Friends co-star Aniston during their time on the NBC sitcom. In 2015, the actor’s father claimed to Star: “They would make out in the dressing rooms. He told me about it — it was when she was married to Brad Pitt.” If this were true, LeBlanc would also have been with McKnight at the time, though Aniston’s representatives denied the fling in a statement to Cosmopolitan: “I have commented in the National Enquirer and others. It's 100 percent false. Jennifer has never had a romantic or sexual relationship with Matt LeBlanc.”

Ahead of the HBO Max reunion, LeBlanc recently told Page Six that he hasn’t spoken with his father in nine years, so it’s safe to say he and Aniston were simply — for lack of a better word — friends.

More like this
Lisa Kudrow Explained How Her Body Image Changed While Filming 'Friends'
By Grace Wehniainen
Netflix Reveals First Look At Wednesday In The 'Addams Family' Spinoff Series
By Bustle Editors
An Ultimate Guide To The Music Of 'Rap Sh!t'
By Brad Witter
Miranda Cosgrove Reacts To Jennette McCurdy’s Shocking ‘iCarly’ Revelations
By Grace Wehniainen
Get Even More From Bustle — Sign Up For The Newsletter