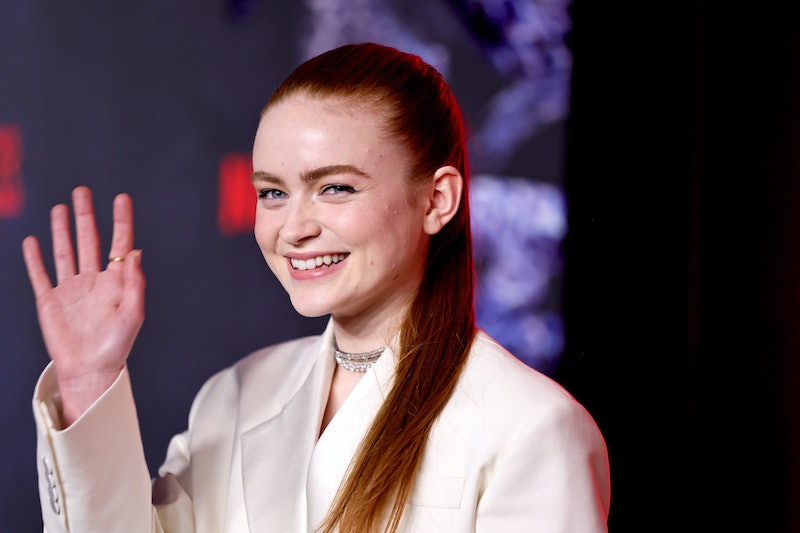 Spoilers ahead for Stranger Things Season 4. Sadie Sink’s Stranger Things character Max Mayfield has been through the wringer in Season 4. Vecna, the season’s big bad, has pretty much been on her tail the entire season and almost succeeded in killing her in extremely close encounters (thank god for Kate Bush’s “Running Up That Hill”). In the tragic finale, however, Max succumbs to Vecna’s powers and ends up in a coma. Her haunting performance gained the young star Emmy buzz, and even co-star Winona Ryder prophesied that Sink is “going to be like Meryl Streep.”

Though Max’s fate this season has mostly been grim, she did manage to patch things up (sort of) with ex-boyfriend Lucas (Caleb McLaughlin). He obviously still cares for her, as evidenced by how gutted he was while holding her limp body. The two even seemed flirty at some point — pointing to a possible reconciliation in Season 5. Though Max’s future looks bleak (she is in a coma), her love life may just take off should she survive. And now that Max is accounted for (and Lucas and Max’s shippers have been somewhat sated), it’s only natural to turn to the actor playing the Stranger Things fan-favorite and wonder what’s going on in her love life.

So, is Sadie Sink actually dating anyone?

The Fear Street actor is known to be private and keeps away from social media. “I don’t have the Instagram app or any social media apps on my phone,” Sink told Glamour UK in June. She said she would “download it sometimes to check in” but that “social media probably isn’t the best place for me.” So it’s no surprise that she hasn’t posted photos with anyone that could end up fueling the relationship rumor mill.

Sink has been performing on Broadway since she was a little girl, before bagging her first role at 11 in The Americans. But it wasn’t until she landed her star-making turn as a Hawkins transplant in Stranger Things Season 2 at 15 that she even had her first-ever kiss with co-star McLaughlin. Since it was also McLaughlin’s first kiss, he explained in an episode of Beyond Stranger Things that he felt “weird” about the kiss especially since they filmed it in front of their parents. Sink told TheWrap, “I mean, of course I was nervous because it’s a first kiss, right?” Their first kiss at the Snow Ball is a core memory for Max, and she even tries to use it to shield her mind from Vecna.

Sink and McLaughlin’s onscreen chemistry lead fans to wonder whether the two were actually a couple when the cameras weren’t rolling. But in a May interview with Vogue Singapore, the actor cleared any lingering rumors up and talked about being good friends with the cast. “The bond that we have … you can’t describe it. We’ve grown up together in this really unique situation and we’ve always had each other to lean on and talk to. We understand each other in a different way,” she told the outlet. She also mentioned being “emotionally unavailable.” Pointing out the similarities between her and her character Max, Sink said, “I also think Max and I can be pretty closed off at times, maybe slightly emotionally unavailable. But she has a soft heart.” Maybe that’s a clue that she’s currently not dating anyone.

It wasn’t just the Stranger Things fan base that was buzzing with excitement about Sink’s potential romantic prospects though. Sink became a quick Swifties’ favorite when she starred in Taylor Swift’s short film All Too Well opposite Dylan O’Brien (The Maze Runner). Though the 15-minute film was released in November 2021, the film (and casting) was announced months prior. So when Sink was spotted with Patrick Alwyn in New York in September 2021, rumors that the two were dating sparked. Some even speculated that Swift played matchmaker between the two, especially since Alwyn is the brother of Conversations With Friends’ Joe Alwyn, aka Swift’s longtime beau. Neither Sink nor Alwyn addressed the rumors and the two haven’t been seen together since.

Sink also hasn’t been spotted with anyone else since, so for now, Sink appears to be single but she’s busier than ever. Aside from acting, she’s been modeling for some of fashion’s most coveted brands, including on the Miu Miu runway in Paris. Plus, she has projects in the works including The Whale, which is set to premiere later this year.

Her social life is also particularly rich. Sink told Glamour UK that she’s “very close” with her family. “My best friend in the world is my brother Mitchell,” the actor said. “We’ve obviously known each other my whole life and we trust each other, and we’re open and honest with one another. That’s super important to me. It’s a very special bond.” Sink has also gotten to bond with her Stranger Things cast and is IRL besties with Millie Bobby Brown, who plays Max’s onscreen BFF Eleven.

She’s also got other notables in her roster of friends, including Swift. “[Swift is] such an incredible human being, so smart and so grounded,” Sink told Glamour UK, adding, “To have her as a friend, as a director, as a mentor, and to be able to bring such an iconic song to life was just an honour.”

More like this
Brad Pitt’s Recent Dating History Includes A German Model
By Brad Witter
Kourtney Kardashian Shares New Photos From Her & Travis' Courthouse Wedding
By Bustle Editors
Who Is Camila Cabello Dating? She's Getting Cozy With Lox Club CEO Austin Kevitch
By Radhika Menon
'Stranger Things' Star Jamie Campbell Bower Reflects On Being Sober For Over 7 Years
By Radhika Menon
Get Even More From Bustle — Sign Up For The Newsletter