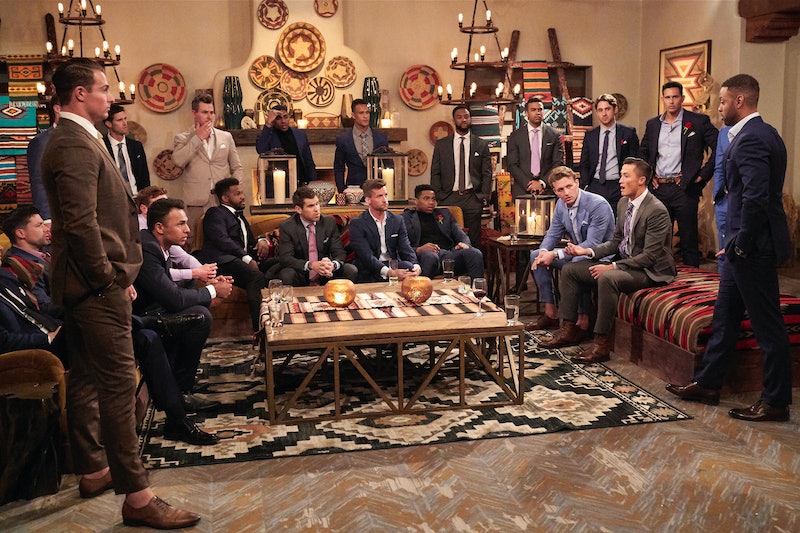 Throughout her Bachelorette season, Katie Thurston has mitigated abrupt exits and shocking eliminations, proving she isn’t afraid to send men home at a moment’s notice. As numbers dwindle and connections deepen, you may need some help keeping track of which contestants are still in the running and who’s been sent packing. Read on for a breakdown, which will be updated each week to reflect the season’s standings.

Who’s Left On The Bachelorette

Most of Justin’s screen time thus far has been comprised of his incredulous facial reactions. Even if he doesn’t wind up making much of an impact on Katie, his looks of appall, shock, and shade have certainly left a mark on viewers.

Greg is this season’s internet boyfriend. Fans immediately fell in love with his disarming smile and sheepish energy, so much so that they’ve been calling for him to be the next Bachelor if he doesn’t win Katie’s final rose. How far he’ll go on the season remains to be seen, but the chemistry between him and Katie is unmistakable. Just don’t expect much dirty talk.

Everyone’s favorite single dad has thoroughly enveloped the hearts of viewers with his incredible vulnerability and honesty. Michael and Katie’s connection really shone through during their one-on-one date, where Michael spoke about love, family, and his late wife. As one of the older contestants, Michael’s maturity has been on full display, exemplified by his comments about the journey not ending with an engagement, but starting with one.

It’s officially Blake’s third — or second-and-a-half — attempt at wooing a Bachelorette. After competing on Clare Crawley and Tayshia Adams’ joint season of The Bachelorette, the Canadian wildlife manager arrived in Week 4 to throw his hat in the ring for Katie’s rose. The two have a little bit of history, having DMd briefly on Instagram, but Blake clearly seems smitten with Katie, even if everyone else isn’t that thrilled about him being there.

Who Went Home On The Bachelorette

Despite leaning a bit too heavily on a fake British accent schtick during his limo entrance, Andrew became both a fan favorite and a solid contender for Katie’s heart. He treated her to Taco Bell, engaged in poignant conversations about interracial dating, and always wanted to let Katie make her own calls about the other men instead of prying for drama. So when Katie eliminated Andrew at the end of Episode 7, it came as a shock. The next day, Andrew came to Katie’s hotel room to give her a proper goodbye. He left her a note that read “If you change your mind, I’ll be waiting,” which prompted Katie to sprint down a hallway and a flight of stairs after him. She leapt into his arms and the two shared a tearful embrace during which Katie asked if he wanted to stay a little longer. After a moment, Andrew declined, feeling as though they both got the closure they needed. Now, fans have begun campaigning for him to become the next Bachelor.

Props to Mike for moving beyond being the season’s token virgin and transforming into a multidimensional suitor for Katie. His best moment came during the Episode 2 group date, where he deftly and honestly revealed his ideas and apprehensions about physical intimacy, impressing Katie in the process. Mike even acted as the group’s collective voice that led to the the elimination of Karl. However, when Mike finally got his one-on-one date with Katie, things turned a little awkward. An afternoon of intimate, guided cuddling illuminated the two’s lack of chemistry, and Katie sent him home before the dinner portion of their date.

Brendan was the house’s only Canadian until Blake Moynes arrived, though he still had the distinction of being the only firefighter trainee in the cast. To many fans’ surprise, Brendan made it to the top eight despite never having formed any meaningful relationship with Katie. But to his credit, he saw the writing on the wall and sought out Katie to ask why he was still there. Acknowledging that they didn’t have a strong enough connection for her to feel ready to meet his family during the upcoming hometowns, she sent him home.

Who could forget Connor B, the middle school teacher who was first seen playing a ukulele in a bathtub before exiting the limo in a cat costume? He ended night one with a makeup-smearing makeout session with Katie and solidified himself as an early frontrunner. However, the two lost steam over the course of the season. A double date with Kaitlyn Bristowe and her fiancé Jason Tartick illuminated to Katie that she and Connor B. just didn’t have a spark, resulting in a tearful goodbye between the two. Connor did get a comforting smooch from Michael A on his way out, so it’s not a total loss.

Initially, Hunter appeared to be a sensitive, passionate, single father or two. Though he and Katie didn’t spend much time together, he established his concern for her emotional well-being, grilling Thomas about his intentions and getting him to admit he’d thought about potentially becoming the next Bachelor. However, Hunter spent Weeks 4 and 5 turning into a villain and giving conflicting statements about how deeply he felt for Katie, which was enough reason for her to send him home.

A strapping San Diego native who, despite getting into one of the quickest feuds in franchise history, managed to become a support system for Katie. However, it appeared that Aaron was involved in drama too often for Katie’s liking. He always seemed more interested in house conflict than his connection with Katie, and for that he was ultimately sent home.

Tre took the time to make sure Katie was aware of the other mens’ intentions, asserting himself as the first man to directly address Thomas about his questionable reasoning for signing up for the show. The move earned Tre a group date rose and a certain amount of trust from Katie; she was also someone who addressed drama on behalf of the lead during her Bachelor season. But ultimately, he proved to be more of a confidant than a romantic companion, leading Katie to eliminate him.

Though he assumedly has plenty of other qualities to offer, James never quite shook the reputation of being the guy who showed up in a box on night one.

Josh didn’t have much luck in terms of romance. He never managed to share a significant moment with Katie, resulting in his being sent home.

Quartney’s defining characteristic initially appeared to be having a peculiarly spelled name, but over the course of five weeks, he managed to demonstrate a natural presence on group dates and show off his personality. Unfortunately, his connection with Katie never materialized.

A district attorney from Newport Beach, Califorina, Andrew M. never had much airtime nor did he make any noticeable connection with Katie.

Kyle didn’t make much of an impression on Katie during his short stint on her season, which culminated in his early elimination.

John’s elimination came as a bit of a shock to fans. Though he had all the makings of a frontrunner, his time on the show was confusingly short.

Despite coming out of the limo on night one with a genie’s lamp and making a “rub one out” joke, Christian wasn’t able to make much of a mark on the season.

Thomas has the unfortunate distinction of having one of the most jaw-dropping eliminations in Bachelorette history. Despite being one of Katie’s early favorites, he put a target on his back by revealing that he came on the show to grow his platform, in addition to having his eye on potentially becoming the next Bachelor. After the men warned Katie about Thomas’ duplicity, he did his best to quell her apprehensions. At the rose ceremony, Katie called Thomas to the podium, putting everyone under the impression that he would indeed be getting the final rose of the night. However, Katie then informed Thomas that his “Bachelor audition ends tonight,” unceremoniously sending him home.

Conor C. was ultimately upstaged by Connor B., who established himself as the superior namesake by snagging a kiss on night one.

Karl managed to take on the mantel of villain during his short time on the show, informing Katie that some of the men were there for the wrong reasons without giving any evidence about who he was alluding to. In the end, all the men in the house turned on Karl, calling him out during a rose ceremony and getting him sent home.

Cody’s elimination was the first real shock of the season — not because people expected Katie to keep him, but because she sent him home in the wake of some of the most flippant drama in the show’s history. In short, Cody was the first casualty of the season whose downfall was the result of not being there for “the right reasons.” At least, according to Aaron’s side of the story.

Austin’s time on the show was mostly uneventful, not proving effective enough to catch Katie’s eye.

Brandon and Katie didn’t spend much time together before he was eliminated, but his delightfully mid 2000s hair will be remembered.

Gabriel introduced himself by slowly and methodically shared a breathy hug with Katie. Unfortunately, that was just about their only physical contact this season.

Despite being able to stick around for a couple of weeks, Garrett was ultimately unsuccessful in trying to create an early relationship with Katie.

Jeff was the guy who showed up on night one in an RV, which isn’t necessarily a negative, but the inside didn’t exactly exude charm. It was pretty clear that Katie wasn’t into it — New Mexico is only big enough for one famous RV.

Landon and Katie weren’t able to to form much of a relationship during his short time on the show.

Marcus and Katie spent little to no airtime together, resulting in his early elimination.

Another night one elimination, Marty just wasn’t able to make enough of an impression on Katie.