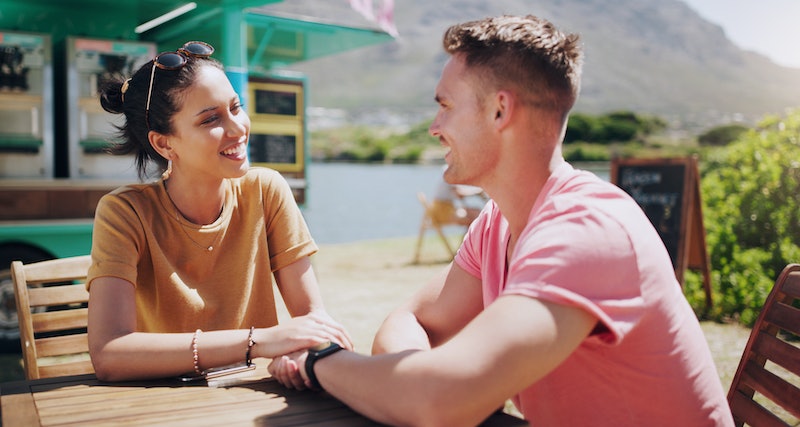 Cancer and Sagittarius zodiac signs make the type of mismatched couple that only seems to work in movies. One is a sensitive, comfort-loving, homebody, while the other is a spontaneous, trailblazing adventurer. When the zodiac’s crab and archer get together, it’s a love story that’s sure to be filled with lots of ups and downs. Cancer and Sagittarius’ zodiac compatibility has everything you need to know about this water and fire sign pair.

“The first word that springs to mind when defining compatibility between these two signs is ‘difficult,’” astrologer Jeanine Duval tells Bustle. “Cancer is all about emotional and domestic security, whereas Sagittarius is impulsive, a bit of a player, and a thrill-seeker. These two don't seem to have a lot in common at first glance.”

In astrology, Cancer and Sagittarius are five signs apart, which means they make a quincunx or inconjunct aspect. According to astrologer Clarisse Monahan, this type of aspect can indicate challenges in a relationships because these two can feel “alien to one another.” For instance, crabs are nurturers, who enjoy being at home, and can be somewhat demanding in relationships. This type of personality can be a little too restricting for a Sagittarius who’s independent and tends to ice out those who demand too much from them.

“That's not to say a relationship like this wouldn’t work,” Monahan says. “But it can bring up some problems.” Like any incompatible zodiac match, Cancer and Sagittarius will need to work together in order to make things last.

When it comes to sex, these two will have a tough time getting on the same page. For one, Cancer is sensual and romantic. “As a crab, they often choose to remain inside their shell,” Duval says. “They prefer candlelight dinners and rose petals on the bed.” Sagittarius, on the other hand, is spontaneous and impulsive. Sexually, they’re outgoing, fast-moving, and aren’t afraid to try new things. Sagittarius would be more compatible with other fast-moving fire signs or more experimental air signs in bed.

If these two were to hook up right away, there’s a good a chance it would only be a one-time thing. Their preferences are too different, and one or both partners may be left feeling unsatisfied with the experience. But if there is a connection beyond physical attraction, there is hope. Once trust is established and Cancer, in particular, feels safe, their sex life could good. Cancer will open up, and Sagittarius can help them experiment more in bed. After all, fire and water combinations can be “quite steamy,” Duval says.

On the plus side, both Cancer and Sagittarius zodiac signs tend to be open about how they feel. As the more action-oriented sign, Sagittarius will likely be the first to say “I love you,” which will help Cancer open up about their feelings. At first, Cancer will like being with someone who isn’t afraid to put it all out there.

But as time goes on, the way in which they express themselves may cause some problems in the relationship. “Emotional Cancer is ruled by the moon and philosophical Sagittarius is ruled by Jupiter,” Duval says. “Cancer wants to alleviate everyone else's suffering, whereas Sagittarius is the eternal optimist and just wants to have fun. They rarely speak the same language.” Sagittarius is blunt, while Cancer is sensitive. If Sagittarius isn’t careful about how they speak, Cancer’s feelings may get hurt.

Cancer craves affection, reassurance, and quality time with their partner. Although Sagittarius won’t mind spending a weekend at home with their partner, they were made to explore the world. They crave adventure, and get restless if they’re stuck in one place for too long. It’s important for them to find a partner who understands their need for freedom, and is secure enough in their relationship to let them do their own thing every now and then.

Sagittarius’ approach to life may trigger Cancer’s insecurities, and they may respond by holding on to their archer tightly. Once Sagittarius feels like their freedom is being restricted, they’ll start looking for a way out.

The Biggest Issue In A Cancer & Sagittarius Relationship

A relationship without trust won’t last, and this is going to be one of the biggest issue between the crab and the archer. Cancers have a tendency to become passive-aggressive whenever they’re upset. According to Duval, Cancer might even try to emotionally manipulate their Sagittarius partner in order to get what they want. “Sagittarius will likely try to do their best to make this relationship work,” she says. “But eventually, they may get bored with the dynamic and choose to move on to the next adventure.”

On the other hand, Cancer may get frustrated with Sagittarius’ lifestyle. Cancers aren’t as possessive as their fellow water sign, Scorpio. But they will take it personally if they see their partner spending more time with friends over them. Unless these two openly communicate regularly, there will likely be trust issues on both sides.

Needless to say, Cancer and Sagittarius aren’t match made in heaven. But that doesn’t necessarily mean that their relationship is doomed to fail. In fact, “Cancer and Sagittarius have the potential to grow closer over time, as both can be intuitive, magnanimous and loyal,” Duval says. With enough effort, open communication, and patience, these two can work despite their differences.

Clarisse Monahan, astrologer and owner of Venus in Retrograde