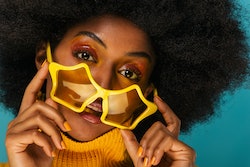 We're inching toward the end of a very long and emotional Cancer season, but not before the July 2020 new moon swoops in with a feelings-filled helping of its lunar energy. This new moon will rise in the skies on Monday, July 20 in the nurturing water sign of Cancer, which is pulling our focus toward close-to-home emotional issues and personal matters. Between the Mercury retrograde period and the whopping two eclipses that took place over the past month, it's safe to say we're kind of already there.

This is actually the second new moon to take place during Cancer season 2020, which is a rare event that can only occur if the first moon takes place on the very first day or so of a new sun season, as the June 2020 new moon in Cancer did. However, that lunation also doubled as a very intense solar eclipse, so this month's new moon is much more aligned with the usual energy that we expect from this phase in the lunar cycle — although it's not without challenges. "New moons are all about the fresh start of something, new beginnings, or starting new cycles," astrologer Aaya Samadhi tells Bustle. "[But] the new moon in Cancer will be challenged by Saturn, the planet of restriction and responsibility."

Saturn's planetary influence on this month's new moon feels sort of like a harsh reality check on what might have otherwise been a really bright and free-flowing luminary. Though we're eager to start setting our new moon intentions now that we've got eclipse season summer 2020 out of the way, Saturn's opposition to the moon forces us to temper that excitement with a big ol' dose of pragmatism, which can be frustrating when we're so caught up in a swirl of emotions and ready to move forward. Don't stress, though: We can still focus on our fresh goals and set new moon intentions right now — but ensuring we're making foolproof, realistic plans and taking things one practical step at a time will serve us much better right now than shooting for the stars without a safety net.

Here are some July 2020 new moon do's and don'ts that'll help you work with the lunar energy and make the most of it.

DO: Get In Tune With Your Emotions

This new moon is bringing us to the end of a very eventful and emotional Cancer season, which had us deep in our feels in all different ways. Make sure to honor this energy under July's new moon by connecting with your inner self. "Whenever we have a new moon in Cancer, it’s a good time to get in tune with what you are feeling," Samadhi says. New moon energy naturally pulls us into a more introspective state of mind, so try to pay closer attention to the state of your feelings and your emotional responses to things. Journaling or meditation can both be helpful ways to make space for these parts of yourself come through.

DON'T: Be Overly Critical Of Yourself

Saturn's restrictive influence has the potential to get really harsh, really fast — and because it's opposing both the Sun and Moon during this luminary, it can make us pessimistic about our goals and overly-critical of our work ethic. "Because this new moon will be making a challenging aspect with Saturn — the planet of restriction and responsibilities, it’ll be important for us to not be too hard on ourselves," Samadhi says. "Trust your path and where you’re headed." If you start feeling doubts about your plans, use that energy to make constructive adjustments rather than scrapping them altogether.

DO: Stay Grounded Through Your Feelings

Cancer season has been chock-full of intensity, and the season's final luminary is ensuring that lasts all the way through the end of it. Between the new moon feels that are bubbling up and Mercury (the planet of thinking) still being in its post-retrograde shadow period, you'll want to keep both feet on the ground to avoid getting totally overwhelmed by your feelings, relationships, and responsibilities. "This new moon highlights themes surrounding our emotions, our outer world, and our inner world," Samadhi says. "It’s important to stay grounded during this powerful time." Strike a balance by tending to your emotional needs while tackling your to-do list, too.

DON'T: Get Carried Away In Fears & Anxiety

With the introspective Cancer new moon bringing up all kinds of deeply personal emotions plus Saturn causing us to examine our goals from a much more critical perspective, it can be all too easy to get carried away with anxiety and stress when trying to figure out next steps — but don't let yourself get frozen with fear. Cancer is the most nurturing sign of the zodiac, so even though this new moon is delivering us a harsh reality check, we should remember to lean into love. Don't forget to pat yourself on the back for a job well done as you accomplish each little step of your goals, no matter how tiny — because we could all use a little extra self-love right now, and Cancer season's energy wants to make sure you feel it!

DO: Plant Seeds For The Future

The last new moon was an eclipse, which was not a good time to set intentions or do the usual new moon spells. But this month's new moon, challenging as it may be, can be a really good time to start moving forward by making a solid and practical plan. "New moons are an excellent time to set intentions for what it is that you want to see manifest in your life," Samadhi says. "Utilize this new moon to help create the reality you want to see." Instead of focusing on your ultimate end game, which can feel overwhelming under the shadow of this new moon, break up your goals into easy, small, and tangible steps that you can tackle one by one. While this moon's energy can feel heavy, it can help you refine your goals to be even more realistic.

DON'T: Try To Rush To The Finish Line

New moons bring new beginnings, but Saturn is all about patience — so trying to take shortcuts to reach your goals or sidestep the necessary hard work is likely going to backfire under this luminary. "The challenging aspect that Saturn will be making to this new moon is telling us that good things come to those who wait," Samadhi says. "Understand that delayed gratification does not mean denied gratification. Come into this new moon knowing that patience is a virtue." Hard work doesn't always look glamorous, but if you put your head down and focus under this new moon, you are destined to get results.