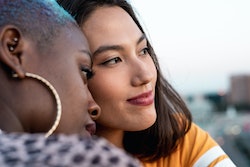 A Leo and Pisces relationship has the potential to be a dramatic rollercoaster ride, full of high-highs and low-lows. When it’s good, these two can be the ideal couple. They’re both relationship-oriented, are generous partners, and will happily fulfill each other’s not-so-secret love of romantic clichés like kissing in the rain or serenading each other under the stars. But one small comment taken the wrong way can turn this blissfully cheesy romantic couple into bitter adversaries. Leo and Pisces’ relationship compatibility has all the info you need on this Fire and Water sign pair.

“At first, these two are wildly attracted to each other,” astrologer Theresa Reed, tells Bustle. “Leo’s passion and creativity are major draws to Pisces, and Leo finds the perfect muse in sensitive Pisces. These are two of the most artistic signs in the zodiac, which makes them perfect partners in anything artsy.”

However, Leo is a Fire sign while Pisces is a Water sign. Fire and water are natural opposites in the zodiac, so Leo and Pisces will have their fair share of differences to overcome. According to Reed, there’s a lot of “steam and sizzle” initially, but fire can make water boil, and water can put out fire. “This can lead to soap opera-level drama, something both signs hate but are prone to,” she says.

Read on to find out more about a Leo and Pisces relationship.

The Pisces fish is sensual, while the Leo lion is passionate. Sexually, these two are a pretty good match. Pisces will love how romantic and sweet Leo can be in bed, and will be pleasantly surprised to find a partner who’s just as into roleplaying as they are. Leo, on the other hand, will appreciate how giving Pisces is, as they love receiving as much attention as possible. Pisces will take their time to worship every inch of Leo’s body in a way that Leo has always wanted.

“These two have plenty of sparks,” Reed says. “Both signs have vivid imaginations, so you can be sure the bedroom is one place they’ll never get bored.”

That being said, there may be potential issues of balance here. When Pisces is in a relationship, they give it their all, and pleasing their partner is a big turn on for them. If Leo is always on the receiving end, though, there’s a chance Pisces may feel used and insecure. According to Reed, Leo zodiac signs must remember to share the pedestal with their Pisces partner equally. When there’s balance in their partnership, these two can enjoy deep intimacy in bed.

Both Leo and Pisces feel things very strongly, and how they express those intense emotions can get them into trouble. On the plus side, Leo is noble and big-hearted, while Pisces is deeply compassionate. According to Reed, these traits will help them get close fast. Additionally, both Leo and Pisces are open to love and tend to fall for people fairly quickly. When these two meet for the first time, it can feel like love at first sight.

But, both signs are sensitive and easily offended. One partner’s small offhand remark about the other’s hairstyle can wind up becoming a big fight over another small comment that was made two years ago.

Leo is a fixed sign, which means they can be very stubborn and set in their ways. As the more go-with-the-flow partner, Pisces (a mutable sign) will find themselves having to constantly give in to their partner or apologize first if they want the dynamic to remain happy and harmonious. Over time, Reed says this imbalance can cause Pisces to question whether the relationship is worth putting up with this tumultuous cycle.

This friendship between Leo and Pisces is just “beautiful,” Stina Garbis, professional astrologer and psychic, tells Bustle. “They are very well balanced as friends.”

According to Garbis, both Leo and Pisces are friendly so their friendship is sweet and kind. Leos love taking center stage and Pisces are happy to support their friend from the background. “Leo cherishes their Pisces friend and there isn’t anything Pisces could do to make Leo hate them,” she says. “At the same time, Pisces loves their Leo friend, admires them, and will be their biggest supporter.”

One of the potential issues in this friendship is jealousy. Pisces get attached to people and may get jealous over how many friends Leo has outside of their friendship. “Leo may sometimes feel crowded and not take the friendship as seriously as Pisces does,” Garbis says. “But Leo is just so friendly and loving, they would do anything for their Pisces friend especially if their friend was feeling down.”

The Biggest Potential Problem Areas In A Leo-Pisces Relationship

If Leo and Pisces don’t keep their emotions in check, Reed says the resulting drama can spoil what could be a loving dynamic between two of the most romantic and creative zodiac signs. Taking a few moments to pause and collect their thoughts before expressing themselves can help each partner approach the other in a calmer way. It’s also important for both Leo and Pisces to learn to let go of the little things and trust that their partner has only good intentions in mind. Everyone is guilty of saying the wrong things sometimes. If they can let things go, forgive, and move on, their relationship can be really successful.

Another issue they may have to deal with is Leo’s possessive nature. It’s no secret that Leos love the spotlight, and in relationships, they need to feel like they’re the center of their partner’s world. If they feel like their partner’s attention is elsewhere, they’ll do whatever they can to get it back. This is something that the free-spirited Pisces won’t tolerate well.

“Pisces wants breathing room and won’t put up with any sort of jealousy or attempts to control them,” Reed says. “This leads Leo to play games to get their attention,” like flirting with other people, “and that only pushes Pisces further away.”

Overall, Leo and Pisces don’t make the strongest match, but they aren’t doomed from the start, either. They would make great friends or creative partners. Pisces has a lot of great ideas, and Leo has the drive to make those ideas a reality. When it comes to romance, though, it will be important for these two to be mindful of how they’re expressing their emotions. If not, Leo and Pisces could be in for a bumpy road long-term.

This article was originally published on Aug. 19, 2021