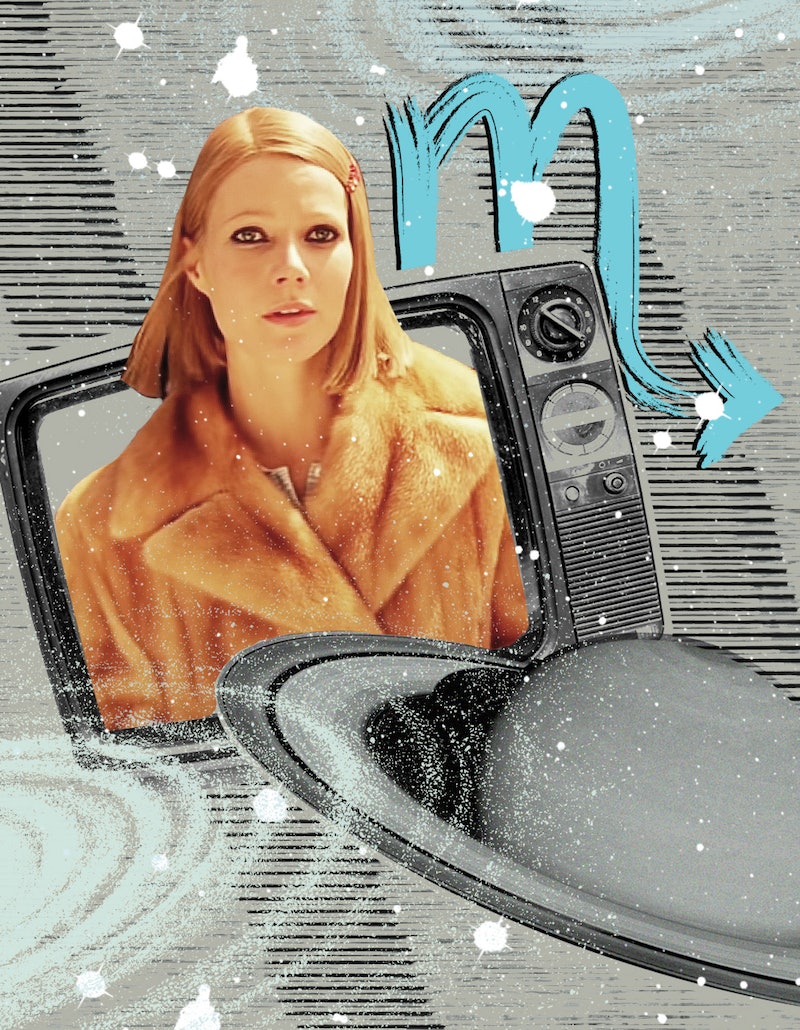 In Astrologically Speaking, astrologers try to pin down fictional characters’ zodiac signs, based on specific scenes, quotes, or fashion choices. Here, Nina Kahn, author of Astrology for Life and Wander the Stars, explains why Margot Tenenbaum of The Royal Tenenbaums is most definitely a Scorpio. Spoilers for The Royal Tenenbaums follow.

Dec. 14 marks 20 years since the release of The Royal Tenenbaums, the 2001 Wes Anderson classic that’s known for its unique visual style, dry humor, and endearing cast of characters. One of the film’s most iconic and sartorially inspiring figures is Margot Tenenbaum, played by Gwyneth Paltrow. The family’s only daughter is a gifted but troubled playwright with lots of secrets. Between her mysterious past, melancholic disposition, and penchant for sulking in the bathtub, I’ve always been convinced Margot Tenenbaum shows Scorpio traits. And now, for the film’s 20th anniversary, I’m here to state my case.

If you need a refresher, the plot of The Royal Tenenbaums centers around the dysfunctional Tenenbaum family, who for various reasons find themselves living under the same roof for the first time in 17 years. Their attempts to tolerate each other, reconcile damaged relationships, and heal from their pasts leads to all sorts of comedic but heartfelt revelations — and Margot’s enigmatic persona is the driving force behind some of the most pivotal points in the film.

While this fictional character may not have been issued a birth certificate, as an astrologer, I’m confident that Margot Tenenbaum’s zodiac sign is most certainly Scorpio. Let’s channel the investigative tendencies of the cosmic scorpion and start sorting through the evidence to prove it.

"She Was Known For Her Extreme Secrecy"

When Margot is first introduced in the film, the unnamed narrator may as well be describing a textbook Scorpio. “She was known for her extreme secrecy,” he says of Margot. The narrator goes on to list aspects of Margot’s life that she’d kept hidden for years — including details of her first marriage, the private studio she keeps under a fake name, and the time she disappeared alone for four weeks at age 14 and came back with half a finger missing. Only a calculated and clandestine Scorpio could manage to hide so much about themselves from their inner circle for so long. Even her husband, with whom she lived, was completely unaware of her 22-year smoking habit.

Scorpios are known for being very private people who play their cards close to their chest. That’s why it makes sense that Margot values her privacy so highly and prefers to keep some things (err, many things) to herself. The mystery that surrounds Margot dates all the way back to her origin story, as she’s the only Tenenbaum child who’s adopted. Even Margot’s romantic arc throughout the film culminates in some secret-keeping. “I think we’re just going to have to be secretly in love with each other and leave it at that,” Margot tells her (non-biological) brother Richie after they first profess their romantic feelings to each other and share a kiss. While their family ends up finding out the truth about their unorthodox relationship, it’s unclear how open the two can ever really be about their desires. Although perhaps, given Margot’s Scorpionic nature, that’s not necessarily a bad thing.

When viewers first meet the present-day version of Margot, she’s living with her husband and spends her days locked in the bathroom alone, languishing in the bathtub as she chain-smokes cigarettes and watches TV. Scorpios are fixed water signs, so they have a tendency to stew in their feelings. (Also, the water sign symbolism of Margot spending “six hours a day sulking in a tub” isn’t lost on me — that is oh-so-Scorpio behavior.)

But we didn’t just catch present-day Margot at the wrong time. Even in the depictions of Margot’s youth, her deadpan expressions and apathetic attitude are some of her most notable qualities. She rarely shows an ounce of emotion, even while verbally expressing that she’s depressed or distraught over something. During emotionally fraught moments, she’s usually hiding in the background or excusing herself entirely. But behind Margot’s heavily black-lined eyes lies a deep well of feelings, which we’re only given access to in glimpses. We can see the sadness in her face when her father, Royal, constantly others her for being adopted — and it’s clear that the pain of Royal’s callous critiques of her play on her 11th birthday still lingers. These sensitive water signs have a lot of feelings brewing beneath their cool and calm exterior, but don’t like to reveal too much about themselves or appear vulnerable, which is why they’re often seen as mysterious. This protective persona often hints at there being something much deeper and more emotionally complex happening in their hearts, which adds to their enigmatic presence.

Even Margot’s iconic fashion sense — with its echoes of dark academia — contributes to her enigmatic and edgy Scorpio mystique. Her eyes are always smeared with thick black liner, and she sticks to a high-end but reliable uniform that involves striped shirts and tennis dresses, loafers, and a giant caramel-colored fur coat. By relying on a few simple wardrobe staples, Margot is able to make a statement without being vulnerable or wearing her heart on her sleeve.

Her Love Life Is... A Little Taboo

Scorpio is associated with the mysterious eight house of the zodiac, which corresponds with sex, secrets, taboos, shame, and other intimate issues. In the montage scene that depicts the private investigator’s findings on Margot’s past, we see snippets of many passionate hookups and affairs that took place through the years, with people all over the world of different ages, genders, and backgrounds. The emphasis on Margot’s many lovers implies that sexuality is an important outlet for her, which is very Scorpio. Scorpios are known for their raw sexual energy, as they crave intense emotional connections, deep intimacy, and transformative experiences. (Side note: she met her first husband — a Jamaican recording artist — while literally out in the ocean, so the water sign symbolism runs deep.)

These Scorpionic themes also help us to make sense of the fact that the love of Margot’s life is her adopted brother Richie. (You know, like how Cher and Josh end up together in Clueless.) While Margot and Richie are not blood relatives, some people in their lives still find their feelings “gross and sick,” as family friend Eli puts it. Their relationship definitely flirts with the forbidden, but for Margot, that’s probably part of the thrill. Scorpios are drawn to taboos and driven to explore the underbelly of their desires, so it’s not too surprising that Margot is emotionally invested in an unusual relationship that could be seen as shameful. Scorpios love extremes, and they don’t mind being outsiders.

More like this
Are Gemini & Scorpio Compatible In A Relationship?
By Kristine Fellizar
Your Horoscope For The May 2022 Full Flower Moon Lunar Eclipse
By Nina Kahn
5 Crystals To Manifest Better Sleep
By Megan McCarty
Rihanna & A$AP Rocky’s Astrological Compatibility Proves They'll Be Amazing Parents
By Nina Kahn
Get Even More From Bustle — Sign Up For The Newsletter