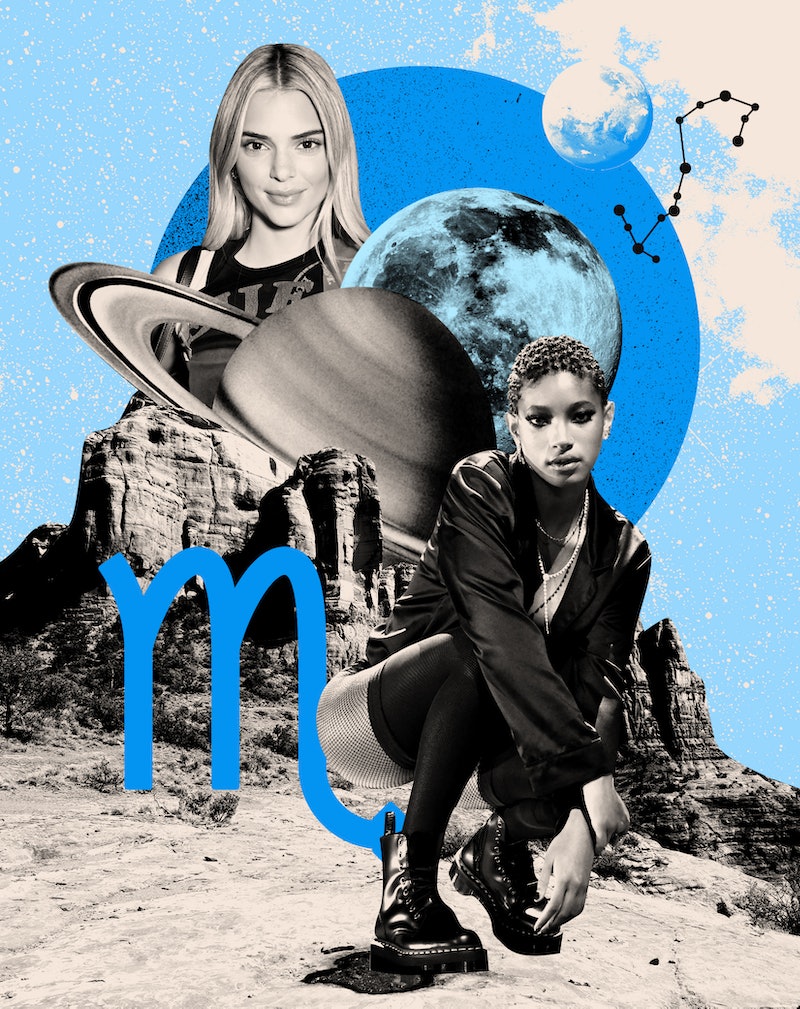 Sharing zodiac signs with someone doesn’t automatically mean you’ll have a ton of similarities. In fact, some people feel strongly that October Scorpios and November Scorpios may as well be two totally different breeds of stinger-slinging arachnids. Every astrology chart is one-of-a-kind and our planetary placements will vary based on the day, year, and even minute that we’re born — so it makes sense that not every Scorpio will have a similar personality. But are the supposed differences between October Scorpios and November Scorpios actually backed up by astrology?

There are plenty of astrological factors behind why people with the same zodiac sign can be so different. While there’s a big emphasis on sun signs, there’s so much more to our birth charts than that. So while almost everyone born between October 23 and November 21 is a Scorpio sun, their moon, Mercury, Venus, Mars, and rising zodiac signs could vary wildly. Even if they share some core Scorpio qualities, they may express themselves, conduct relationships, show their emotions, and take action on things in very different ways.

But there’s another astrological concept that factors into this conversation, and that’s your zodiac sign’s decan. Each zodiac sign is broken up into three decans, and these subdivisions alter the way each planet expresses itself there. In order to understand decans, we have to understand degrees in astrology. Each sign takes up 30 degrees on the zodiac wheel: The first 10 represent the first decan, the second 10 comprise the second decan, and the last 10 degrees make up the third decan of the sign. The sun moves about one degree per day, which means that all October Scorpios are first decan Scorpios, while most of those born in November (except for those born on the first day or so of the month) will be either second or third decan Scorpios.

With decans as the foundation, let’s explore some of the astrological differences between October Scorpios and November Scorpios that’ll allow us to peek under the surface of the zodiac’s fixed water signs.

Scorpio’s ruling planet is the small but mighty Pluto, aka the planet of transformation — but most Scorpios born after November 1 are second or third decan Scorpios, meaning they have a second co-ruling planet that influences their zodiacal expression. Because October-born Scorpios are ruled by Pluto and Pluto alone, they tend to embody the most notorious Scorpio strengths and weaknesses. This includes being deeply emotional, powerful, and truth-seeking.

November Scorpios are almost all second or third decan Scorpios, meaning they have either Neptune (planet of illusions) or the moon (planet of emotions) as their cosmic co-ruler. These planets bring a dreamy, mystical, and sentimental influence to November Scorpio’s energy, which enhances their natural psychic power. That said, these Scorpios might find that they’re even more spiritually attuned and drawn to occult practices than October Scorpios.

As first decan Scorpios, October Scorpios are solely ruled by power-hungry Pluto, which enhances their naturally competitive (and sometimes cutthroat) nature. Because of this intense desire to get what they want and maintain control, October Scorpios can sometimes get extra possessive and jealous when it comes to work or love. It can take more time for them to develop trust and let their guard down than November Scorpios.

As one of the water zodiac signs, Scorpios are deeply sensitive people who are driven by their feelings, even if they don’t always show it. But because about half of November-born Scorpios are co-ruled by the moon (which is the sentimental planet that governs our moods), they tend to be even more affected by their larger-than-life emotions. These November Scorpios can easily pick up on other people’s temperaments and have a harder time wearing a poker face than their October-born counterparts.

Scorpios love to dive under the surface of life and explore the far-reaching depths of the human psyche — and this is especially true for October Scorpios. As the only decan of Scorpio that’s solely ruled by powerful planet Pluto, these scorpions are relentless in their quest for truth and tend to take everything to an extreme. They crave transformation, have an all-or-nothing approach to life, and aren’t afraid to take things to a drastic level.

All Scorpios have a reputation for being dark and mysterious, but November-born Scorpios arguably value their privacy more than any others. That’s because about half of November Scorpios are co-ruled by illusive planet Neptune, giving them an added veil of enigma — while the other half are co-ruled by the moon, which feels most comfortable hiding in the shadow of the night. These influences emphasize the clandestine nature of November Scorpios, which explains why it always seems like they’re hiding a few tantalizing and closely-guarded secrets.