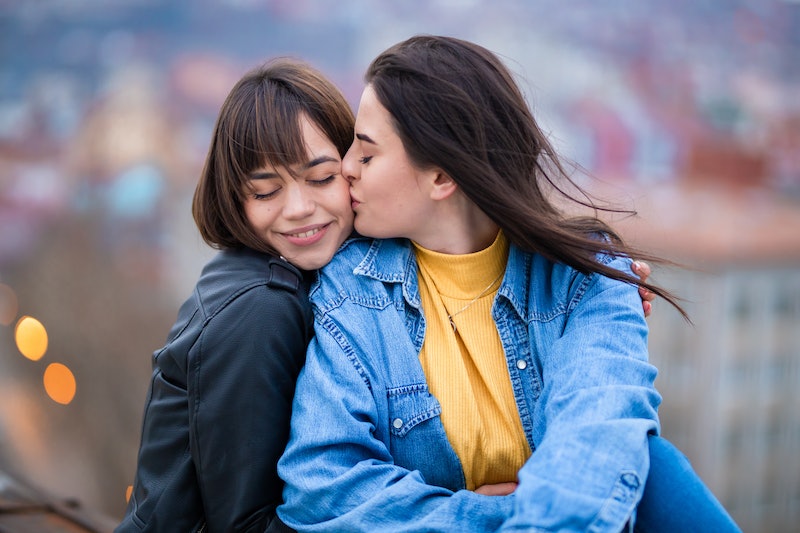 If you could use only one word to describe the relationship between a Taurus and a Sagittarius, that would be “difficult.” The bull and the archer are just two zodiac signs that don’t really go well together. For one, Taurus is slow, steady, and stable earth energy, while the fiery Sagittarius is spontaneous, adventurous, and unpredictable. Regardless, there is a lot that these two can teach each other. Taurus and Sagittarius’ zodiac compatibility will give you insight into this challenging Earth-Fire sign pair.

Taurus and Sagittarius's astrology makes an inconjunct or quincunx aspect, which means they’re five signs apart. “This is an aspect of tension, in which the planets involved will be in signs that are totally unrelated to each other,” astrologer Clarisse Monahan tells Bustle. “However, this mystery can bring an intense and overwhelming intrigue with the other.”

Even though Taurus and Sagittarius “are about as alike as day and night,” Monahan says there’s an undeniable link that draws these two signs together. It’s a kind of attraction that’s intense and confusing. Both signs will be curious to explore why they’re so intrigued by someone who’s not really their type.

Emotionally, the bull and the archer aren’t on the same wavelength. According to Stephanie Gailing, astrologer and author of The Complete Guide to Astrological Self-Care, Taurus is security-oriented. They crave stability and process feelings slowly and practically.

“This may frustrate Sagittarius for whom feelings don’t linger that long; rather, they often find that their emotions arise and then move through them rather quickly,” Gailing says. “All the while, the archer’s experience of being quickly propelled into action by their feelings may perplex the bull, leaving them a bit shaken since quick change is something to which they’re rather averse.”

Sagittarius’ independence and freedom-loving nature might also trigger Taurus’ insecurities. At the same time, the archer may feel like the bull is a little too needy for their liking. “Taurus, ruled by Venus, is more partner-oriented than the sign of the archer, so they can sometimes feel like they’re the ones driving the relationship or putting in more work,” Monahan says. They may get into arguments over how much time they spend together and Sagittarius’ willingness to actually be in a relationship.

When it comes to communication, these two will have to work on understanding each other. Sagittarius is honest and to the point. According to Gailing, their minds work rather quickly, so they tend to move from one concept to the next during conversations. Taurus doesn’t work that way. Instead, bulls like to take their time. They will take an idea and think about it until they fully understand it. A conversation about current events can leave Taurus feeling insecure and Sagittarius feeling frustrated.

Their differences might also cause some issues in the bedroom. Taurus likes to move at a leisurely pace. They’re sensual, pleasure-seeking signs who aren’t in a rush to get anywhere. Sagittarius loves to move from one adventure or position to the next rather quickly. With that said, open communication can transform their sex life for the better.

“Sagittarius can expand Taurus’ horizons in the bedroom, turning it on to new ways to engage its passionate side, and the bull may help the archer to discover pleasure it’s yet to realize,” Gailing says. “That itself — having new horizons to explore – could keep Sagittarius interested.”

Overall, this isn’t the easiest zodiac match for either sign. Despite their initial curiosity about each other, they might eventually find that they’re way too different to make each other happy. It will take a lot of compromising and understanding to make this relationship last.