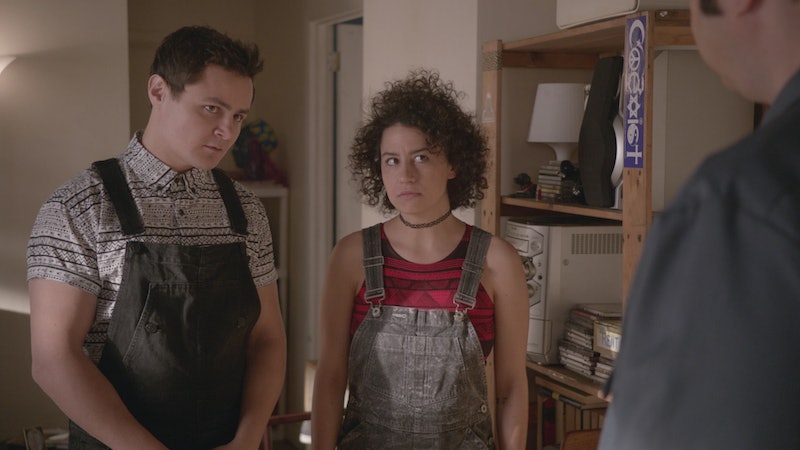 Living with roommates can be difficult, especially if you’re an introvert. The chances of being seen naked or overheard talking to yourself are fairly high, and that sh*t is embarrassing. Plus, if your roommates are extroverts, then you’re going to encounter randos hanging out in your kitchen from time to time. Still, I feel like there are so many things people say about having roommates that aren’t true, and that bothers me. The fact is, Americans are cohabiting more now than ever. Most millennials can't afford to live alone these days, and it doesn't look like that's going to change anytime soon, so it just doesn't make sense to take a negative approach to the topic of living with roommates.

In the past year, I’ve lived alone, lived with my folks, and now I’m staying with friends out in Los Angeles until I can get my own place or we can get one together. I have lived with roommates in the past, though, and I found that most of the crap people say about having roommates just doesn’t hold up. And the media’s representation of having roommates is way off, in my experience. There’s always at least one filthy roommate who never pays their share of the rent on time. Then there are shows like New Girl and How I Met Your Mother, where opposite sex roommates always end up having sex. That's never been the case with me, though.

Here are just a few of the things people have told me about having roommates that ended up being total bullsh*t.

Roommates Will Eat Your Food Without Permission

I’m sure there are roommates who steal food, but I’ve never had any. I’ve had roommates ask if they could borrow some coffee or whiskey once in a while, but that’s pretty much been the extent of it. Which is good, because I get pretty serious about my fancy groceries these days.

Roommates do have sex with each other sometimes, and as long as both parties enthusiastically consent, then that's great! Still, despite what every sitcom ever would have you believe, it’s not a given that your roommate will try to hook up with you.

I’m currently living with two gay dudes who are essentially family, so there’s obviously nothing to worry about there. But I’ve lived with male roommates who sleep with women, and they were 100 percent appropriate with me the entire time we lived together. They might have respectfully complimented me a few times, but those guys literally never hit on my or tried anything even remotely creepy. As it should be.

OK, so I’m literally living with one of my best friends from childhood right now, plus his fiancé who I’m also good friends with. My situation is unique, though. The truth is, not all roommates end up like Rachel and Monica or Hannah and Elijah. Sometimes you just move in with a total stranger for a while, overhear them having super loud sex multiples times, act awkward as hell, create a few warm memories somehow, and then eventually move out. That’s not a bad thing, either. It’s just not what you typically see on TV.

I can’t guarantee that your next roommate won’t be a slob, but in my experience, the stereotype about roomies being super messy isn’t always correct. The guys I lived with in NYC cleaned up after themselves and their friends all the time, and the guys I’m staying with now are the same way. Have any of us vacuumed in the past three weeks? Hell if I know. But we help each other out with dishes, trash, and pet messes — so I’m good.

Sharing Bills With Roommates Is A Pain

Sharing bills with anyone can be uncomfortable at times, especially if talking about money weirds you out as much as it does me. I’ve never really had any problems sharing bills with roommates, though. My Brooklyn roommates always paid their share of the bills on time, and they helped me remember our due dates as well. All I had to do was Venmo them a few times a month and mail my own rent check. It was easy AF.

If Your Roommate Is Dating Someone, That Person Will Automatically Become Your New Roommate

Again, I can't speak for everyone who's ever lived with roommates. And if I weren't single, I'm sure my significant other would be around a lot. That's just because I like to stay in most weeknights, though. If you end up living with extroverts who date other extroverts, (like I have) they'll probably spend most of their free time outside of the apartment. And when their partner does stay over, they won't stay too long. Because extroverts.

Everyone has eccentricities, but that doesn't mean weirdness is inevitable when you're living with roommates. If your experiences are anything like mine have been, then you might feel like The Weird Roommate just because social anxiety and insecurity make you feel awkward most of the time. Hell, your roommates might even think you're kind of weird. None of this means having chill roommates automatically makes you the weird roommate, though. It just means you have chill roommates.