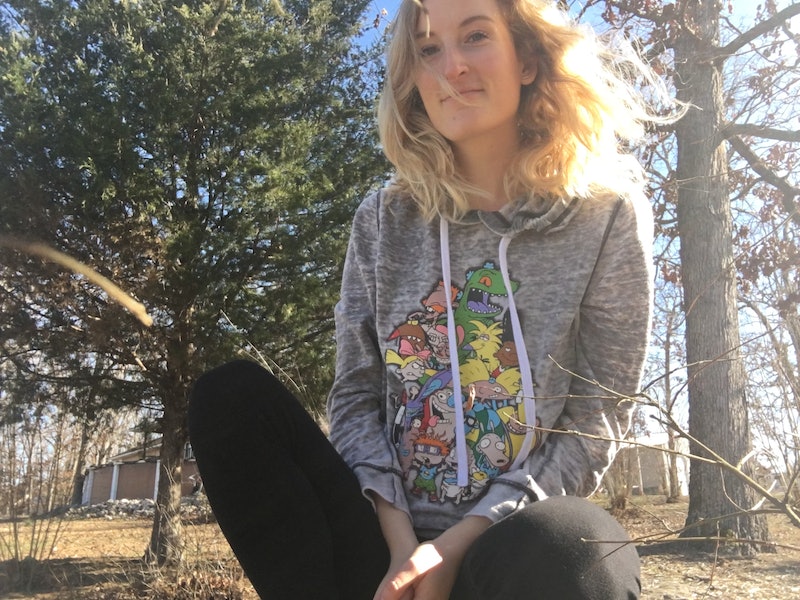 I feel like I’ve changed a lot in the past five years, and I’m mostly thrilled about it. Five years ago, I thought jealousy was a sign of passion. I hadn’t yet realized that Confederate flags are inherently racist, in part because I grew up seeing them so often. I thought I had to smile all the time if I wanted people to like me. I was still a few years away from coming out of the closet as bisexual. I’ve come a long way since 21 — but lately, the part of this transformation that I've felt particularly proud of is how I spend money differently at 26 than 21.

Even though I’m currently a little bit strapped for cash from going on adventures for half of 2016, I still feel like I’m making better choices with my money nowadays than I ever have. Granted, I have more money to work with now than I did at 21. I was in college and living on my own back then, so financial stress was probably an even bigger part of my everyday life than it is today. That said, I don’t think I spent the money I did have as wisely as I should have. I’m not mad about it, though. If anything, I’m just grateful for what the past five years has taught me about money.

This is how I spend money differently at 26 than 21 — I'm sharing, because I'm guessing you can relate.

I Mostly Buy Fancy Groceries Instead Of Fast Food

OK, so I definitely still hit up Taco Bell on a weekly basis, and I'm not ashamed of that. But back when I was 21, I was also frequenting places like Burger King and McDonalds on a regular basis. Like the majority of college kids, I was broke all the time and super-busy, so eating fast food was convenient.

Now that I'm doing better financially and I've totally given up meat, I spend most of my food money on fancy groceries instead of cheap burgers. It's way more satisfying, for so many reasons. Obviously, good groceries taste way better than fast food. It's more than just that, though. Cutting out most fast food has helped me feel better about where my hard-earned money is going. Plus, since I try to stay stocked up on groceries at all times, I only have to leave the comfort of my home to eat if I want to — which means I actually spend less in the long-run.

I Spend Less On My Boyfriends & More On My Nieces

I've always bought my nieces presents, but I used to spend considerably less on them than I spent on whoever I was dating at the time. These days, I'd rather spend money on my nieces than my boyfriends, because I've finally realized that my four nieces are far more deserving of high-quality gifts than any man I've ever dated. I'm not trying to shame my exes here, but I'm embarrassed by how long it's taken me to realize that I've never actually dated someone who's appreciated me or my presents all that much. So these days, I splurge on my nieces instead of my boyfriends.

I Make Vet Care A Priority For My Cats

The kitty featured above has been my little buddy through almost eight years of breakups, failures, moves, and successes. As of last spring, Smuggz and I welcomed a little orange stray into our clan, and she's pretty freaking cute. (She wakes me up every morning to play fetch, no joke.)

I've loved both of my pets for as long as I've had them, but I'm only just now starting to make their veterinary care a priority. This is partially because I make more money at 26 than I did at 21, but it's also because I've reached the point where I'd rather spend money on their health than a new gadget. Both of my cats alleviate my anxiety and depression without ever being asked to, so it just doesn't make sense not to budget in regular check-ups for them — especially now that I can actually afford to.

I Splurge On Self-Care & Makeup More Than I Used To

In the past, I didn't feel like I could justify spending $20 on a tube of Tarte mascara or $40 on eye cream. But nowadays, I make room in my budget for top-notch skincare and makeup, because self-care is something I genuinely enjoy. Self-care helps me manage my anxiety, and I wear makeup often, so buying only the best stuff makes sense to me now. On top of all that, Sephora has a wide array of cruelty-free and preservative-free skincare products to choose from.

I was raised to fear borrowing money more than my own death, and at 21, I wasn't earning enough to pay monthly payments on a damn thing anyway. For these reasons, purchasing anything on a payment plan used to freak me out hardcore. When I got my first (and luckily only) student loan, I was an anxious wreck for days. (Seriously, I was a mess.) Now that I've been paying off my student loan for a couple of years, though, I don't feel nearly as uneasy about committing to payment plans for necessary purchases.

My iPhone is on a payment plan, my new MacBook Air is on a payment plan, and the next vehicle I buy will be purchased on a payment plan as well. The thing is, payment plans are pretty much the only way most people can afford to have nice things, and there's nothing wrong with that. What's more is, the things I'm paying off aren't toys; they're important, grown-up purchases. So now that I'm making decent money, I'll happily pay $75 a month to have a laptop that doesn't crash daily.

I Try To Shop Ethical, Feminist Companies As Much As Possible

When I was 21, I don't think I even knew feminist companies were a real thing. Last summer, I finally remedied my ignorance when I wrote an article about ethical, feminist companies that need support. Since then, I've bought all of my journals from Flora Stationary, a non-profit company that funds women's futures by paying for their college educations. About a month ago, I raised a figurative middle finger to the pink tax by signing up for Dollar Shave Club, and I fully intend to buy a pair of THINX period panties when I get paid again. At 21, I was clueless about all the ways women are still economically disadvantaged in the U.S. At 26, I want to put my money where my feminist mouth is.

I'm More Likely To Spend Money On Experiences Than Things

OK, so I've almost always spent money on experiences. That said, my desire to collect as many awesome experiences as possible has grown even stronger in the past few years. If I have the extra money, I will always choose visiting my friends over ordering a new pair of shoes. (Unless I desperately need shoes, of course.) If a band I love is playing within a three hour drive of me, I'll buy a concert ticket over a new outfit any day. And speaking of clothing...

I've Completely Changed How I Shop For Clothing

I still love clothing as much as I did at 21, but everything from where I shop, to how much I spend, to what kind of pieces I buy has changed in the past five years. At 21, I bought the clothes I thought my boyfriend would like, instead of the clothes I felt the most comfortable in. I bought a lot of bright, revealing clothing and push-up bras then, too. At the time, I think delving into revealing fashion was a positive thing for me. It was one of several ways I broke free of being conditioned to slut-shame since childhood. When my ex started slut-shaming me for wearing crop tops and short-shorts, rocking revealing clothing helped me break free of his slut-shaming too.

But these days, I don't buy padded bras and I could fit all of my clothing in one suitcase. I shop at thrift stores as much or more than I shop at new chain stores, and I rock androgynous fashion as much or more than I sport revealing fashion. When I do buy clothes, they're typically black, olive green, or gray. In the picture above, my Lake Tahoe tank top is actually a children's shirt that I've had since I was 10. And the jean button-down I'm wearing over Tahoe Tessie? It's a men's shirt that I snagged when Abercrombie&Fitch sent free samples to Bustle's office last winter.

I'm More Likely To Take Time Off To Travel

I've realized over the past few years that it's not only OK to take off work sometimes, it's crucial when you're struggling with burnout. Five years ago, I wouldn't ask off work for anything, and I would cover my coworkers' shifts at every opportunity. This was all despite the fact that I was also a full-time college student trying to graduate with honors. (I did it!)

These days, I feel like I take more fulfillment from my achievements than ever, but I'm also working to maintain a healthy work-life balance. Burnout will do more harm to a career than time off will, so whenever an opportunity to travel comes my way now, I at least try to take off work. Fortunately, my job and my finances are a lot more flexible at 26 than they were at 21, so prioritizing adventures over logged hours is much easier to do.

I Spend Less On Booze & I Never Buy Cigarettes

When I was 21, I typically kept a pack of cigarettes and a bottle of wine in my apartment. I didn't drink or smoke excessively, but it wasn't uncommon for me to end my day with a glass of wine and a cigarette. Fortunately, my first love encouraged me to quit smoking cigarettes for good. He was an excellent boyfriend in the beginning of our relationship, so quitting cigarettes for him was a no-brainer to me.

Five years later, I still spend money on booze sometimes. Drinking with friends is fun once in awhile, and I do enjoy the occasional glass of wine after work. That said, since I highly prefer weed to alcohol, I save almost all of my vice money for delicious, high-quality, anxiety-relieving, marijuana these days. And now that I vaporize my weed instead of smoking it, the stuff lasts longer (and tastes way better) than it did when I was 21.

Automatic bill pay scared me at 21, and that makes total sense. I was so broke back then that, at one point, I sacrificed eating three meals a day so I could afford to buy birth control pills. It was a challenging time.

Now that I'm a bit more financially stable, I think automatic bill pay is where it's at. The fact is, it's just a lot easier for me to pay my bills on time when a robot takes care of it for me. I also know myself well enough to know that I need automatic bill pay, otherwise it's just too tempting to spend money on fun stuff before taking care of business. So, yeah, all my bills are on automatic bill pay now. What can I say, I'm a grown-ass woman.