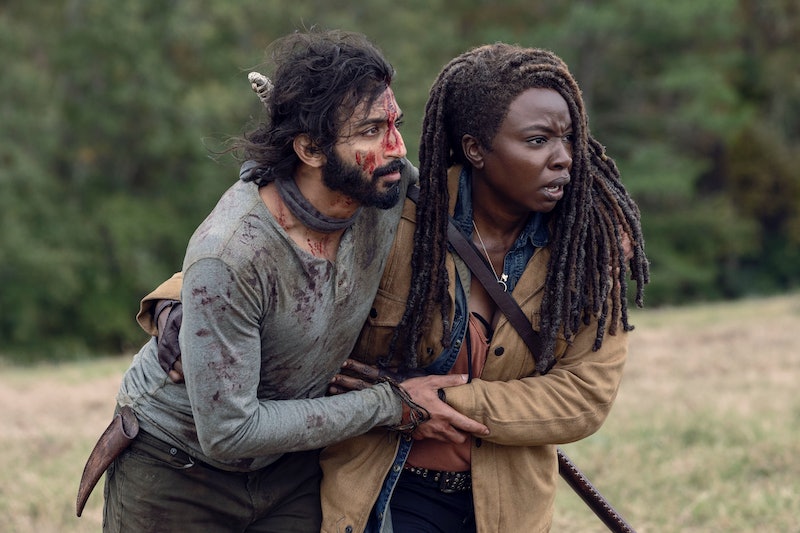 Since the last season ended almost almost seven years after it began, just about everyone could likely use a Walking Dead Season 9 recap before Season 10 begins. As if the timeline itself wasn't complicated enough, there was drama between Michonne and the Maggie, a ton of new arrivals to keep track of, as well as a looming war with the Whisperers, a group even more terrifying than Negan and the Saviors. as well, both on the side of our heroes and against them.

There were not one but two time jumps before Season 9 was even halfway over — first the show jumped eighteen months ahead after the "All Out War" against the Saviors, and then six years after Rick's "death." In that time, baby Judith Grimes has grown up, and the communities at Alexandria, Oceanside, the Sanctuary, Hilltop, and the Kingdom have grown apart. We still don't know everything that went down during those lost years. Meanwhile, new bands of survivors like Magna's group and the Highwaymen have joined the roster.

One thing we do know is that Negan, the antagonist from Season 6 to Season 8, was in prison for all of those years. He escaped for a few episodes in Season 9, but ultimately returned to his cell in Alexandria. Negan has also struck up a friendship with Judith, which greatly concerns Michonne.

But what started as an optimistic season about building a future plummeted in more ways than one. By the end, a new war against the Whisperers started, and the survivors from the Kingdom were forced to migrate to the Hilltop because they ran out of resources. Plus, Carol and Ezekiel split up, which is a major bummer even if you weren't 'shipping them.

Here's what else happened in the eventful Season 9...

Rick & Maggie Are Gone, But Not Forgotten (Or Dead)

Rick Grimes' last episode of The Walking Dead was highly publicized by AMC in advance of Season 9, and then he didn't even die. Instead, he was taken away by a helicopter that Jadis/Anne called, and those left behind carried on without him. The spin-off series Fear The Walking Dead has revealed a little more information about that helicopter and the organization behind it, but not much.

Lauren Cohan also left The Walking Dead in Season 9 without her character dying. Maggie and baby Hershel went with Georgie, the woman whose crew goes around teaching survivors how to farm, mill, and irrigate their post-apocalyptic communities. This happened somewhere in between time jumps, though, so we still don't know what exactly pushed Maggie to bail on Hilltop and Alexandria.

Everyone Else Who Died

Cue the "In Memoriam" music because a ton of characters were killed off in Season 9, including: Gregory, Jesus, Enid, Tara, Henry, and Tammy-Rose, as well as minor/new characters named Kenneth, Justin, Ozzy, Alek, DJ, Frankie, Rodney, and Addy.

Around the time of Rick Grimes' departure, the Virginia-based communities were drawing up a constitution of sorts. Then, in her grief, Michonne let it collect dust. When the action picked back up six years later, King Ezekiel proposed that they put the charter back on the table and sign it. While not all of the leaders were convinced, they came together to organize a fall festival to commemorate the signing. When the representatives did sign the charter, however, it had less to do with togetherness and more to do with taking on the new Big Bad...

The Arrival Of The Whisperers & A New War

The Whisperers, villains straight out of the Walking Dead comics, are one of the creepiest groups in the whole series. They wear masks made out of walker skin, use titles like "Alpha" and "Beta" instead of names, and absolutely do not care about killing the living.

A teenager from this group, Lydia, defected to Alexandria to escape her abusive mother — Alpha, the leader. The Whisperers demanded that Alpha's daughter be returned to them, but a small group of survivors broke Lydia free a second time.

So, during the fair, the Whisperers kidnapped and killed ten survivors from various communities, then left their heads on pikes for all to see. Siddiq, Alexandria's new doctor, witnessed the massacre and was left alive to warn his people. The Whisperers drew a line and promised death to anyone who crossed it.

Someone's On The Radio

In the final moment of the season, the long distance radio that Eugene repaired made contact with somebody — but who?! It could be someone from the Commonwealth like the TWD comics, or any number of new characters. Finally, some hope for the new season.

The foreboding trailer for The Walking Dead Season 10 promises more snark from Negan and a whole other war to come against Alpha. We know that historically, the survivors have what it takes to win the Whisperer War. Just please, let them get it done without anything too tragic happening again. Those pikes are still haunting fans.

More like this
'Bridgerton’s Jonathan Bailey & Simone Ashley Just Teased A First Look Of “Kanthony” In Season 3
By Grace Wehniainen, Alyssa Lapid and Sam Ramsden
'The Sandman’s Ending Is A Departure From Neil Gaiman’s Comic Book Series
By Kadin Burnett
Every Horror Movie Reference In The 'PLL: Original Sin' Premiere
By Alyssa Lapid
Netflix Just Rebooted A Classic ‘90s High School Drama
By Maxine Harrison
Get Even More From Bustle — Sign Up For The Newsletter