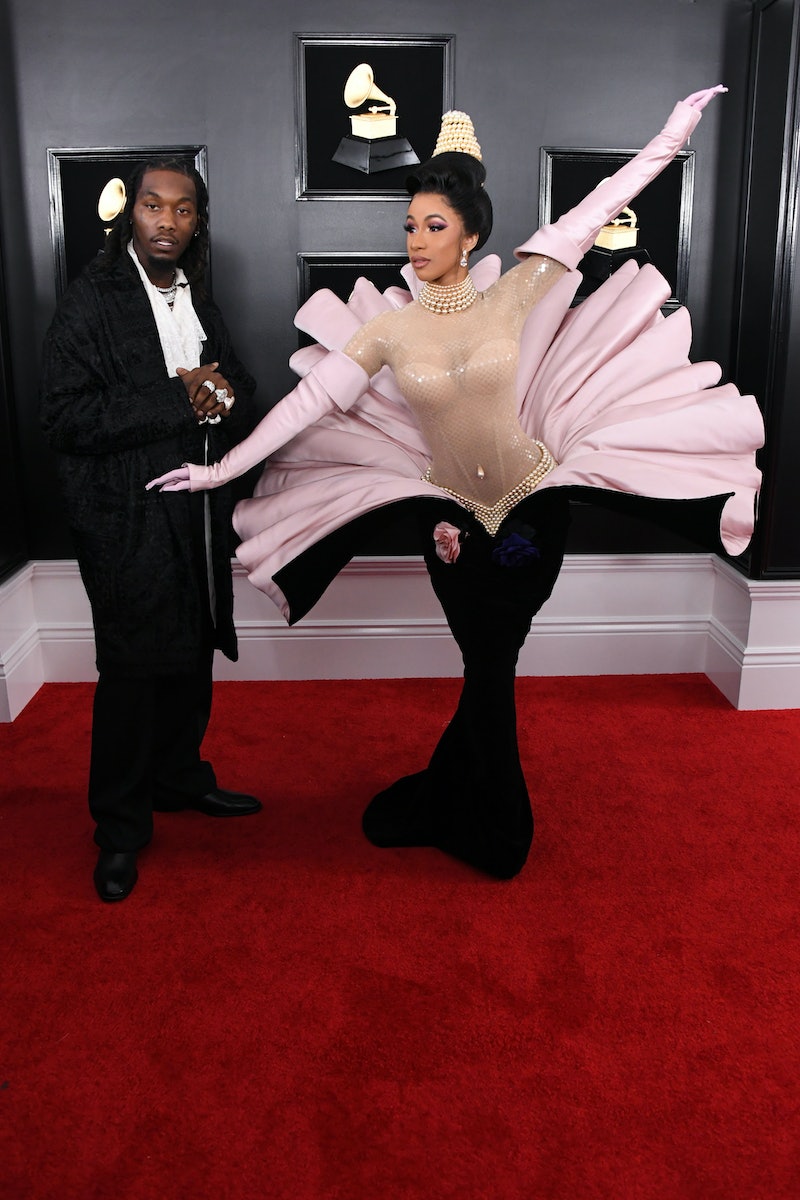 The world was introduced to Offset's first solo album on Friday, but it's his youngest fan who may be feeling his music the most. Mere hours ahead of her husband's album release on Thursday, Feb. 21, Cardi B shared a video of their baby Kulture smiling and laughing while listening to an Offset song. The Migos rapper dropped his first solo album, Father of 4, on Feb. 22 and the cover features him posed with his four children, his youngest child, 7-month old Kulture, sitting on his lap. And thanks to Cardi's video, you can see just how much his baby daughter already loves her dad's music.

After standing by her side while she accepted Best Rap Album at the 2019 Grammys earlier in February, Offset is now on the receiving end of Cardi B's support. Ahead of his album dropping on Friday, Cardi was promoting it on her Instagram with a preview of the song she's featured on, "Clout." She was so excited for the album's release, she even shared a rare video of their daughter Kulture.

In the post, Kulture wears a pink onesie with cats on it — complete with little cat ears on the hood — as an unseen person bounces her to Offset's 2017 song, "Ric Flair Drip." Kulture is all smiles, and Cardi wrote on behalf of her daughter, "This is one my favorite songs from my daddy the other ones you'll hear it tonight !! Go PAPA Go PAPA # Fatherof4."

After her Grammy win, Cardi temporarily deleted her Instagram account. But thankfully the "Money" rapper is back and providing absolutely adorable content like this. The video of Kulture is also slightly uncharacteristic of Cardi. While she is active on social media, she doesn't often share images of Kulture, who was born in July 2018.

It took until December of that year for Cardi B to publicly share a photo of her daughter with Offset and when she has shared videos of Kulture in the past, she has often blocked out her face with the heart-eyes emoji. So this video — along with it being super sweet — is a pretty big deal, and perhaps is symbolic of where Cardi and Offset are right now in their relationship.

Throughout their relationship, Cardi and Offset have gone through a lot of ups and downs. Cardi announced on Instagram that they were ending their marriage in December 2018, but just weeks later it seemed they could be back together. Then, he rather publicly appeared with her at the Grammys, causing many fans to conclude that they were definitely trying to make things work.

After the awards ceremony, Offset gave Esquire an update on their relationship status for a profile on Father of 4 that was published just ahead of the album drop. "It's been good," Offset said. "We're being more open to each other, raising our baby, and taking things slowly." And clearly, for right now, they're making his album release a family affair.

On the Father of 4 album cover, Kulture sits on Offset's lap while she wears a pink and blue dress and a headpiece. The Migos rapper is also surrounded by his three other children from three different mothers — 3-year-old son Kody, 3-year-old daughter Kalea, and 9-year-old Jordan. "I am a FATHER OF 4," the 27-year-old rapper wrote on Twitter the day before the album release. "The most beautiful and smart kids I could ask for. I want them to understand there [sic] dad for the good and the bad."

He also shared a behind-the-scenes video of what it took to make the cover photo of his album happen on Instagram. In the video, Kulture appeared calm as she sat on her dad's lap. Offset amusingly noted that the photo shoot was "daddy mayham [sic] but we got it done."

While the status of Cardi B and Offset's relationship is a little unclear, these rappers are still all about the love. And that extends to how they're raising their daughter, who will hopefully always be bopping to her parents' music.