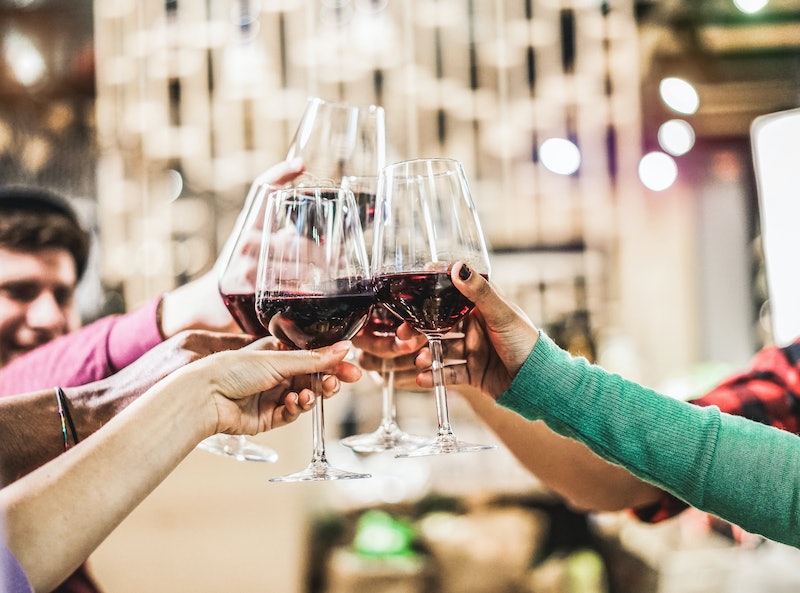 Thanksgiving is like, basically here, y'all. I know this because I just spent my entire lunch break trying to find a parking spot in the terrifyingly-chaotic Trader Joe's parking lot — an endeavor at which I was wholly unsuccessful, and also departed from hungry. While we're all grateful we don't have a Mercury retrograde Thanksgiving to endure this year (as we did last year), we do have to deal with the actual second-worst thing, which is a Mercury retroshade Thanksgiving — a transit as shady as its name implies. Great. Mercury retroshade will affect Thanksgiving 2019 in more ways than one, so buckle up, and read on.

In case you need a briefing, Mercury retrograde's post-shadow period always begins as soon as Mercury goes direct after a retrograde — and in our current case, this took place on Nov. 20. While that marked the end of 2019's final Mercury retrograde, it doesn't mean we're in the clear. The retroshade of Mercury's backspins last approximately two weeks, so we're still feeling the shady effects of this transit through Dec. 7 — and Thanksgiving falls right smack in the thick of it.

Because Mercury rules things like communication, traveling and transportation, and scheduling, when the planet goes retrograde, these areas of our lives tend to hit snags, forcing us to slow our roll. Unfortunately for us, slowing down isn't easy during the madness of the holidays, despite the difficulties the retroshade may bring. So being prepared for Mercury retroshade as you enter your Thanksgiving travel days and celebratory festivities can help you glide through with some dignity and grace still in tact.

Let it be known: Retrogrades and retroshades aren't an astrological curse — they're actually super regular transits that can help us slow down and review things in our lives to ensure we're on the paths we want to be on! And there are plenty of fun seasonal activities Mercury retroshade won't ruin. But that doesn't mean these astro-occurrences don't get in the way of our daily hustles (and, you know, the busiest travel days of the year) — so yeah, you can cry, complain, and blame the cosmos for your troubles if you want to. I won't fault you for it.

Anyway, dry your retroshade tears at least temporarily and let's get to preparin' your bad self for the ways Mercury retroshade will affect Thanksgiving this year by heeding some sound astrological advice — including some tips from the lovely astrologer Lisa Stardust, who shared her two cents on the matter with Bustle, too. Best of luck! Here's what to know:

Travel Plans May Get Messy

"First of all, travel will be unpredictable," warns Stardust. Mmmkay, Mercury retroshade rules #1 and 2: Traveling sucks, and so does technology. That being said, many of us have no choice but to deal with both during this retroshade Thanksgiving, so brace yourself. "Make sure you double check to make sure Waze is working correctly," continues Stardust. You'll want to triple-check your travel plans, fully charge your phone, and for Goddess' sake, leave early. The retroshade makes unexpected traffic, flight delays, travel app malfunctions, car trouble, and myriad other inconveniences much more likely to go down, so give yourself some wiggle room in case your journey takes longer than you hoped.

Given that Mercury rules over our ability to communicate, you can practically guarantee that our words will come out wrong here and there during a retroshade — especially if we're in the midst of a heated conversation. Considering Thanksgiving forces many of us to interact with family members that we perhaps don't agree politically, this could prove disastrous. "Don’t put your foot in your mouth while having intense political conversations at the dinner table," advises Stardust. "Be respectful of [others'] views — even if you don’t agree!" Thinking before you speak will make things more pleasant for everyone. Express your views respectfully and thoughtfully — you catch more bees with honey that you do with vinegar, right?

While we're on the topic of political debates at the Thanksgiving dinner table, be aware of the fact that Mercury's aspect to illusive Neptune might make you feel even more sensitive when it comes to communication — meaning you'll want to protect your energy and know that your feelings could get hurt more easily than usual. "Your intuition will be on high alert on Thanksgiving Day, Thursday, November 28, because that's when Mercury trines sensitive Neptune for the fourth and last time this year," wrote astrologer Pam Ciampi in Llewellyn's 2019 Daily Planetary Guide. "This aspect can ... make you overly sensitive to the opinions of others." Don't be afraid to politely ask to excuse yourself from a conversation if you find it getting too intense for you.

Beware Of Your Hometown Exes

Being home for the holidays often means running into ghosts from your hometown past who are also home for the holidays — and retrograde transits make it even more likely that you'll run into someone from your past, including someone from your love life. The same can be said for retroshades, babes, so be prepared. "There’s still a high probability of bumping into an ex who’s back in town," shares Stardust. "Don’t worry! If anything, they will be enamored with your success — not the other way around!" That said, own your glow-up, pack your most confidence-boosting outfits, and keep your eyes peeled, just in case.

Black Friday Sales May Not Be The Best Idea

For some folks, the post-Thanksgiving Black Friday shopping extravaganza is what the holiday weekend is all about — but with the retroshade still rearing its ugly head, it might behoove you to save your holiday shopping until the last minute, as communication is still unclear. "Always keep receipts for purchases — or get gift receipts — as you may need to return them in the future," advised Stardust regarding Black Friday shopping in an earlier interview with Bustle. "Items may not be advertised at the actual price and you may wind up purchasing the wrong gift by accident." Unless a deal is too good to wait on, save your shopping until after Dec. 7, when the retroshade clears.