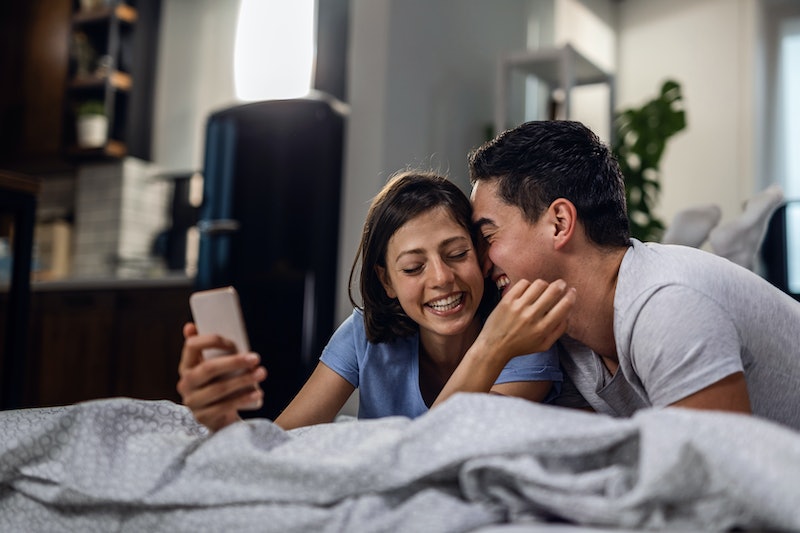 Rebound relationships can feel like the real deal, especially since they come at a time when you could use a distraction, AKA right after a breakup. They take you from feeling alone and sad, to giddy and connected. But it can be tough to tell if it'll fizzle out, or if the rebound will turn into a long-term relationship.

The latter very well may be the case for Miley Cyrus and her new boyfriend, singer Cody Simpson, who've been having themselves a whirlwind romance. According to People, the two are spending a lot of time together, and have even taken to sharing couple-y photos on Instagram, along with comments that show how much they care about each other.

Of course, this is happening right after her breakup with Kaitlynn Carter, which closely followed her divorce from husband Liam Hemsworth. It just goes to show how some rebound relationships can seem right, only to fall apart a few weeks later. If you do find yourself in one, however, and seem to be sharing the type of connection that Cyrus and Simpson have goin' on, then you very well may be wondering if it'll last.

"Rebound relationships are intense, quick relationships that pop up after your other relationship is over," Susan Trombetti, matchmaker and CEO of Exclusive Matchmaking, tells Bustle. "They seem to move really fast and usually have a familiarity to them that is reserved for long-term relationships."

That's why, even though you just got out of a serious relationship, and have only just met this new person, you may find yourself falling for them, spending every night with them, and maybe even making serious plans for the future. "It's like when you and your partner break up after a lot of drama, and suddenly they are marrying the next person they meet or moving in with them inside of a month," she says. "These relationships tend not to last, but can be intense and are usually based on the previous relationships (making yourself feel better, for example)."

And that brings up another trait common among rebound relationships; the fact they often happen before you've grieved the end of your old relationship, or given yourself time to be ready to date again, and instead are just looking for a quick way to feel better.

"Emotional pain is processed the same in our brains as physical pain, so we often find [a breakup] unbearable, much like a massive migraine or a bone break or sprain," Estepha Francisque, LCSW, LISW, therapist and executive director of Forward Ethos Counseling, tells Bustle. "In the same way we have an immediate urge to relieve these physical pains, we often rush to relieve emotional pain as well, even unconsciously."

A new relationship can be fun, and you might not be thinking too clearly as you enjoy this new person's company — all things you can certainly do if it feels right, and if it's working for you at the time. But if you're looking for a relationship that'll last beyond those first exciting days, you'll eventually want to step back and see if it has a few other qualities.

The first sign you may be able to stick together? Effective communication, Francisque says, which includes being able to stand up for yourselves, validate each other's feelings, and assert your wants and needs. It's a good sign if the relationship isn't just about having fun 24/7, but about truly connecting and respecting each other.

You might also notice a feeling of genuine intimacy, including sharing deep thoughts, insecurities, hopes, and dreams, Francisque says, as well as sense that you're becoming a real part of each other's lives. Instead of just having a fling, "you find that time with your new partner is becoming an increasingly integral part of your life and schedule," she says, and you want to keep that going

It's also more likely things will last if you were really and truly over with your ex, long before the break up. If that was the case, it probably means you had time to process what went wrong and grieve that loss, Trombetti says, thus preparing you for another relationship fresh out of the gates.

It'll help if you were the one who did the breaking up, too, since it's always easier to move on when you aren't feeling hurt, surprised, or abandoned. "It's not to say it doesn't hurt you to end the relationship, but you have come to terms with it," Trombetti says. And that might put you in the right head space to move on with someone else.

Only you will know for sure how you're feeling, and why you sought out this new relationship. But if you notice positive signs, like a genuine connection and good communication, and if you're in it for the right reasons, it very well may have staying power.