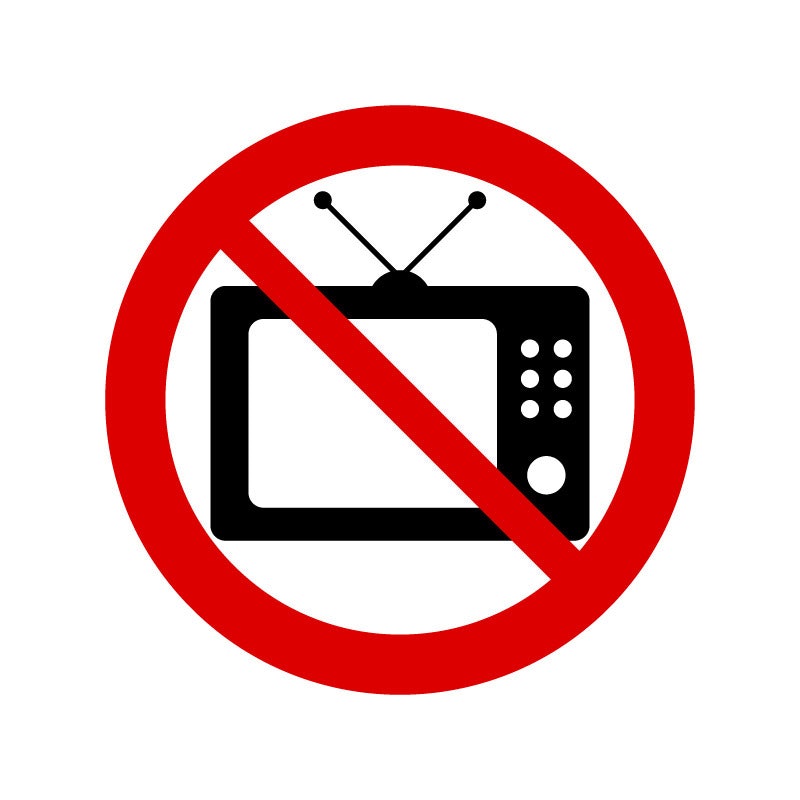 The thought first occurred to me sometime between finishing the third season of Stranger Things and starting the seventh season of Orange Is The New Black. Or, actually, maybe it was after I'd knocked out both seasons of Fleabag in two sittings — and then immediately asked myself, "but wait, now what will I watch?" Or maybe it was when the last minute of the Euphoria season finale ticked by, and I felt a creeping sense of forlorn from knowing I would be Rue-Jules-Kat-and-Maddy-less for the foreseeable future... but then relief when I realized that at least, the next night, there would be Bachelor in Paradise (!!!) to occupy my evening.

It was somewhere in that monthish-long Stranger Things-OITNB-Fleabag-Euphoria-Bachelor haze — with some Office and Superstore reruns thrown in for good measure — that I dared to think the thought: I've gone overboard with TV.

It's not like TV was replacing other things that I needed, or wanted, to do. But I'd begun to realize that there wasn't much downtime in which I wasn't watching something. Noise, moving images, starting a new series, finishing a season — something was always on. If I didn't have any plans after work and came home to unwind, I'd turn on the TV for some background noise — and then leave it on during dinner, because why not, may as well have something to watch as I ate! I'd lie in bed with a show to lull me to sleep (and yes, I'm aware of the effects of blue light on sleep — though this piece isn't about that). Even at the gym, I'd hop on the exercise bike and zone out to whatever I downloaded from Netflix to my phone.

It had all become rote, a matter of habit. Something I did without even thinking about it. So, I decided to go TV-less for a week. More specifically, anything-watchable-on-a-screen-less — nothing streaming, nothing network, no shows, no movies, no YouTube.

But First, Some Context About My TV-Watching Habits

As someone who works in media, I like to think that "I have to watch TV for my job." But deep down in my heart, I know that that's just an excuse. Because let's be honest, I've been a TV devotee since I was a kid. TGIF on ABC in the '90s was my jam. Disney Channel Originals? Big fan, can't say enough good things. Nick at Nite soothed me in high school when I couldn't sleep. And don't even get me started on how magical it was, back in the mid-aughts, when networks started streaming shows for free online the day after they aired. (I give Grey's Anatomy a 10/10 as a research paper procrastination tool.) Fast-forward to today, and it's hard to disagree that we're living in an especially glorious era of TV. The talent, the production value, the accessibility and convenience, thanks to Netflix, Hulu, HBO Go, Amazon Prime, and their corresponding apps — it's all just so pleasurable (and easy) to watch our favorite shows, and discover new ones, these days.

And then there are the personal benefits: Watching TV helps my mental health in that it de-stresses me after a long day or week. And, of course, there's the joy derived from getting sucked into a really interesting plot — or, on the flip side, being able to completely zone out for an hour or few. TV serves as a sort of mental transport to new and different kinds of experiences and situations, and it adds value in setting, amplifying, and contributing to cultural conversations. And there's something so satisfyingly bonding about watching a show with a friend or partner. (See: my husband and Billions. Also see: my friends and The Bachelor and Bachelorette.)

But is there such a thing as too much? While there's nothing inherently wrong or bad about enjoying watching TV, it's always a good idea to be mindful of whether it's impacting the rest of your life — as well as if it's keeping you from time spent doing other things that might enrich you, Dr. Sheila Jowsey-Gregoire, MD, an associate professor of psychiatry at the Mayo Clinic, tells me.

"There are benefits to us learning about the world through storytelling and having our brains creatively stimulated by narratives," Jowsey-Gregoire says. "But, we have to also take into account that we’re not participating actively in the narrative." That means our brains aren't being stimulated in the same way as if we were talking to someone face to face, or if we were actually experiencing something IRL. "We’re social beings, we need social connectedness. And we’re not getting the full spectrum of social connectedness if we’re passively watching social interactions embodied in narratives," she notes.

What about just having something on in the background? Is there any harm in that? Probably not, says Jowsey-Gregoire, as long as what you're watching isn't disturbing or stressing you out for extended periods of time.

Plus, there's the whole concept that watching TV during your downtime can help provide a break mentally. "Our brains probably can't handle total productivity, and so sometimes, you just need to power down," she says. "That's when the escapism of watching TV or letting yourself get immersed in a narrative is a good thing. Sometimes you just need a brain vacation from the real-life narrative that you're living." The only thing to remember, though, is getting immersed in the narrative is really easy to do (especially these days, with the ease of all the streaming platforms available to us). "It doesn't take any real effort — you just turn on your device — so you have to be a little cautious that the ease of [immersing yourself in] the narrative doesn't hijack your schedule away from other things," like spending time with family and friends, being up and about, hobbies, work, or anything else, she says.

In assessing my own watch habits, I didn't feel like TV was replacing my IRL experiences and interactions. But still, I felt like it was all becoming a little much. Or a lot much. What conversations was I missing out on having with my husband over dinner? Would I feel more calm at bedtime if I chose, instead, to read? How much more mindful would I be about my everyday tasks if I actually paid attention to what I was doing, instead of how exactly Brenda Song was going to escape her creepy husband in their giant cabin mansion after she got amnesia?

Hence, the impetus for my week-long TV break. That may not seem like a long time to you, dear reader, but I won't lie — the thought of quitting all things streaming, network, and otherwise for seven days made me feel a little antsy. What would I do with all that... quiet?

What I Did When I Stopped Watching TV

Like any usual week, I had my fair share of after-work and weekend plans — dinner and drinks with friends and coworkers, workout classes and volleyball games, as well as a beach day (an objectively screen-unfriendly zone!), and a thrilling, action-packed afternoon spent running errands. All of this wasn't hard to go screen-free; it was the other small moments of my days that were a little more challenging.

For example, in the mornings, I often turn on my iPad and watch part of an episode of The Office as I apply makeup and do my hair. And in the evenings, when I cook, I'll usually turn on the TV or my iPad to have a show playing in the background as I chop vegetables. Instead, in these instances, I just... focused on the task at hand. It wasn't terrible, but the quiet was also a little bit... boring? Unnerving? I'm one of those people who constantly has to be stimulated, and being forced to just reflect and be alone with my thoughts was certainly a change-up from my usual frame of mind. I didn't necessarily love it, but I also didn't hate it.

And usually at night as part of my routine, I'll put on a rerun of Superstore or Bob's Burgers, or catch up on a show that I might've missed when it first aired. Instead, for this week, I made a point to sit in bed and read. To be honest, I lasted all of 10 minutes the three nights I did this before I just dozed off. (So maybe this ended up being a positive in terms of me falling asleep earlier and getting more sleep, though I didn't really notice any difference in my sleep quality.) I didn't necessarily notice feeling any calmer at night by reading instead of watching something, and this could be due to the fact that the shows I usually watch right before bed are not that intense or stress-inducing to begin with. But, I did at least feel relaxed, and I was able to make an additional dent on my book that I typically reserve for subway reading.

Going TV-free did make me more mindful at mealtimes. My husband and I are usually pretty good about debriefing about our days anyway, but with the no-screen rule, we had even more dedicated time to talk in the evenings. And to be honest, it was really lovely, almost akin to the kind of date nights we have out of the apartment. And a couple nights, we even broke out the Scrabble board.

By the time the week was over, I had to really sit and think about what I liked the most and least from the experiment. The only "negatives" I could really think of were the intermittent mild longings for something that I do genuinely enjoy (my fave shows!), and being out of the loop during conversations at work about big pop culture moments that took place over the week (the FOMO I felt when the rest of our entertainment team was discussing our Bachelor in Paradise coverage plans was real). But in general, I would say the positives far outweighed the negatives: Having a forced week-long reset only made me more mindful about all the times I was watching something just for the sake of it. By cutting TV out for a week, I was able to realize just how much I was using it as a crutch for noise or unneeded stimulation. And it only inherently created more time to meaningfully connect with the person with whom I share my life (and living space).

All that being said, I'm happy to have TV back in my life. But here's an interesting thing I realized as I watched my usual shows (including starting the new season of Succession!) post-experiment: They were even more fun to watch — meaning, I paid attention to the plotlines, and I wasn't doing it with that rote feeling lurking in the background, like before — because of my break. Because I was being selective. Because it wasn't just something to do, but rather something I chose to do because I enjoy it.

I haven't watched more than two episodes of anything in a row since my week of no TV ended; not because there's anything wrong with that, of course, but because I haven't had the desire to. (I even had an afternoon cleaning spree, and didn't think to turn on the TV for background noise!) If this week reminded me of anything, it's that TV is fun and great and adds joy to my life — and is best enjoyed in moderation.