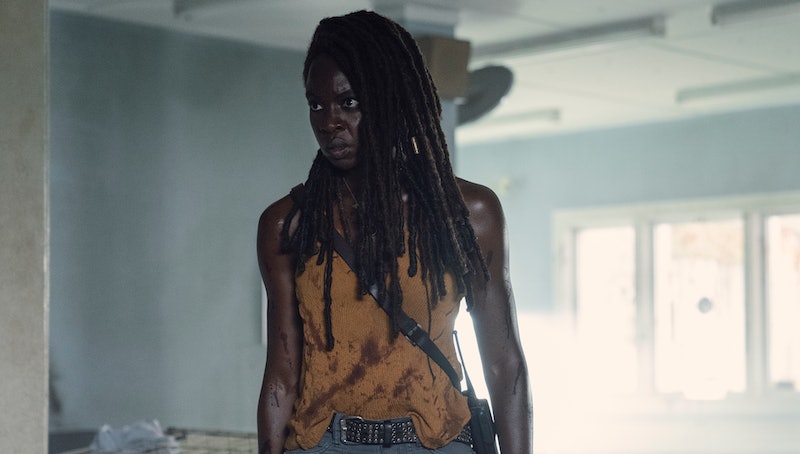 Spoilers ahead for The Walking Dead Season 10. Michonne's last appearance on The Walking Dead didn't see her saving the communities from the Whisperers, but it did set her up for a potential epic Richonne reunion. In "What We Become," Danai Gurira's last episode on The Walking Dead, per AMC, Michonne came to terms with her past and set off to find Rick, indicating that she might not be done with the franchise completely.

Michonne's trip to retrieve weapons from a naval base to use against the Whisperer horde turned out to be a major bust. Kevin Carroll's Virgil character tricked her — his family was actually dead all along and he imprisoned his fellow researchers. He promptly also held Michonne captive and poisoned her with jimson weed that led her to have hallucinations of an alternative Michonne. This "hell" version of Michonne let Andrea die, joined Negan and his Saviors (which is why there were shots of her holding Lucille in the trailer for this season), and was killed by Daryl and Rick.

But after she managed to free herself and the researchers, Michonne gave Virgil another chance, highlighting how far she has come since her loner days accompanied only by her "pet" zombie. It was during Virgil and Michonne's continued search for the weapons that she found some of Rick's things.

The final moments of the episode made it more clear than ever that Michonne is joining the Rick Grimes movies. Ahead of her final episode, AMC had not officially confirmed her involvement in the three spinoff movies set for theatrical release. But here's how Gurira's final episode connects her to the Andrew Lincoln films and the next chapter in Richonne's story.

Rick's boots were on Bloodsworth Island, but it was on a nearby boat that she found a cellphone with a sketch of her and Judith on it. The word "Rick" also appeared on the phone, as well as some characters from a foreign language's alphabet. Michonne previously had no proof that Rick survived the blast at the bridge. But now she knows he may be alive and that he had traveled by boat — which is new information to fans too since we last saw Rick on a helicopter.

One of the biggest obstacles with Michonne leaving to go after Rick is that she has two children with him to take care of — Judith and R.J. But, thanks to radio communication, Michonne was able to tell Judith that the "brave man" could still be alive. Unsurprisingly, Little Ass Kicker told her mom she has to go find Rick. With the knowledge that Alpha is dead and the horde has been partially destroyed, Michonne agreed to leave her children behind and enter the great wide world of Walking Dead movies.

Michonne Is Headed North — With Some Detours

Bloodsworth Island is located in the Chesapeake Bay off the coast of Maryland. But Michonne told Judith she was headed even further north. While on foot during her journey, two people approached Michonne asking for her help to join a caravan full of wagons, horses, and people traveling in organized formations. It's unclear if this group will have any information on Rick's whereabouts, but Michonne's humane treatment of these strangers means she's getting involved with this new group regardless.

Michonne Will Finally See A Helicopter?

Instead of planes, trains, and automobiles, the apocalyptic world relies on boats, wagons, and helicopters. Michonne still doesn't know about Rick being carted away in a chopper by Jadis because he was a "B." But as she travels, she may discover a powerful community behind this mode of transportation. Seemingly, the helicopters will connect Rick and Michonne to the other series in The Walking Dead universe, including Julie Ormond's secret organization that is in the upcoming World Beyond.

Six years have passed since Rick seemingly died, but now Michonne has the proof she needs to seek out her partner. Following her Walking Dead exit, Gurira is busy as the showrunner of the miniseries Americanah and a star of the Black Panther sequel. But her final episode is proof that the forthcoming "Rick Grimes movies" are really going to be the "Rick and Michonne movies," which helps lessen the sting of losing Michonne on The Walking Dead.