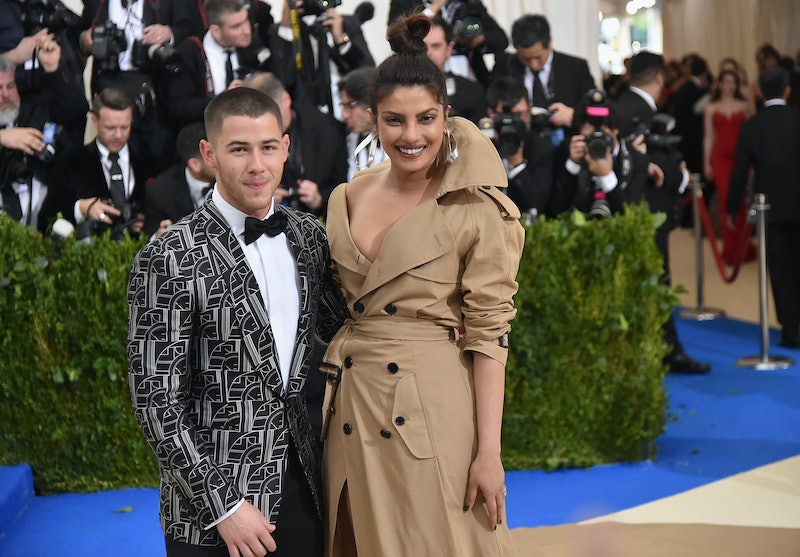 The internet can't stop buzzing about Nick Jonas and Priyanka Chopra's engagement festivities, and for good reason. Not only are the photos from the couple's engagement ceremony absolutely stunning, but all of the pictures and videos from the actual evening bash have filled everyone who's caught a glimpse of them with FOMO.

Chopra and Jonas, who reportedly met during the 2017 Met Gala, have successfully kept their relationship under wraps — only sharing bits and pieces with fans throughout. And if you've been following Chopra and Jonas' relationship timeline closely, you know that things have been moving pretty fast for the newly-engaged couple. It seems like just yesterday that the pair were first spotted together hanging out at the LA Dodger's game, or even double dating with Joe Jonas and Sophie Turner. But, if anything, Chopra and Jonas' whirlwind romance is proof that time constraints mean nothing when it comes to matters of the heart.

After being the subject of engagement rumors for the past month, the couple confirmed their engagement on Instagram on Aug. 18. Chopra captioned her picture with: "Taken... with all my heart and soul...", and Jonas followed suit with: "Future Mrs. Jonas. My heart. My love."

In a series of pictures following their announcements, Jonas and Chopra shared beautiful snapshots of their engagement ceremony in Mumbai with fans. But, truly capturing the essence of the bash were photos from the happy couple's family and friends.

Chopra's cousin Parineeti Chopra posted a photo of herself posing with the Quantico star and Jonas in front of the perfect ode to their love — a monogram-mashup of the couple's first initials.

Actor and singer Alia Bhatt posted a pic of herself posing with Chopra, Jonas, and their family and friends during the festivities.

But, what's an enagement bash without Cardi B? No, the "Bodak Yellow" rapper wasn't in attendance, but the sounds from her platinum studio album Invasion of Privacy certainly were. While giving fans a sneak peek of the partygoers in action, Jonas posted a clip of his fiancé dancing to Cardi B's summer 2018 hit "I Like It" to his Instastory, and yes, it's every bit as amazing as you'd imagine it to be.

In addition to awesome dancing and adorable pictures, the duo also received their share of well wishes.

Chopra's manager Anjula Acharia shared a sweet post dedicated to her business partner and friend. Accompanying a picture of she and Chopra, Acharia wrote,

"End of the night shots are never the best!!! But last night I was so moved to see you so happy in all aspects of your life. We went on an amazing journey together, eight years ago I called you out of the blue and you trusted in me, in my belief and vision for you, of course it’s easy to say now after what we have done together that I believed you would be India’s biggest star that would shine so bright around the world," she continued. "But here you are, representing us in the way I believed only you could!!! I’m so happy and even more excited for your future now... to have found love is the biggest accomplishment of all!!! Nick is such a wonderful man. He deserves you and I’m glad that East and West really are finding a way together one more time!! God bless you, my partner, my friend and of course #family. You always make me feel part of your family and I’m so grateful for that! Thank you for your trust in me :) don’t forget #icalledit!"

Acharia is a proud manager indeed, but most importantly, she's also an even prouder friend. It's so nice to see Chopra and Jonas' family and friends as excited, if not more, about their relationship milestone as they seemingly are.

Jonas' parents weren't about to be outdone by the couple's friends though. They stole the show with an absolutely adorable photo on Jonas' Instagram Story. Proud parents Denise and Paul Kevin Jonas, sometimes referred to as Mama and Papa Jonas all over social media, were also pictured with the soon-to-be-wed couple on their son's Instastory. And, of course, they couldn't have looked happier.

Jonas and Chopra's engagement festivities certainly made it a night to remember. And you can bet that their actual wedding celebration will be even more exciting to watch.

More like this
Priyanka Chopra & Nick Jonas’ Matching Tattoos Have A Romantic Meaning
By Radhika Menon
Priyanka Chopra Jonas Opens Up About “High Stakes” Birth Of Daughter Malti
By Radhika Menon
Jameela Jamil Defends Sam Smith After Trolls Body-Shamed Them
By Jake Viswanath
Britney Spears Shared The Real Reason She Shut Down Her Instagram Account
By Brad Witter
Get Even More From Bustle — Sign Up For The Newsletter
From hair trends to relationship advice, our daily newsletter has everything you need to sound like a person who’s on TikTok, even if you aren’t.