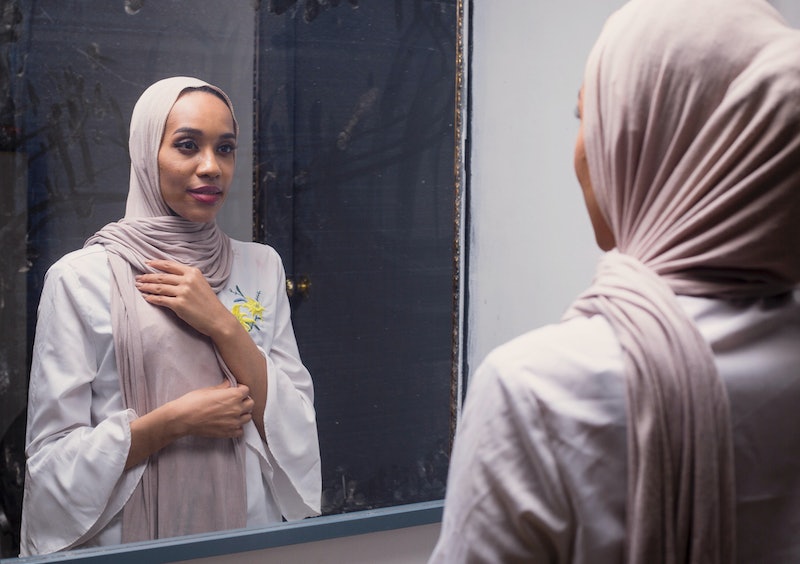 Born in Sudan, Asma Elbadawi and her family relocated to Bradford when she was a baby. A keen sportswoman, she successfully petitioned the International Basketball Federation (FIBA) in 2017 to remove their ban on religious headwear on the court. Her spoken word poetry has seen her perform at the Roundhouse in London, and in 2016 she was the winner of Radio 1xtra's Words First competition in Leeds.

The first time I consciously thought about what beauty meant to me, I was a student-athlete at university in my early 20s. I was sat in a salon, looking at myself in the mirror, while the hairdresser poked and prodded at my hair. At the time, I had dyed it red. Just three weeks later, I decided to relax it. Understandably, my hairdresser asked me why I had made such a rash decision, and I didn't have the answer to her question.

A few days later, I came to the realisation that every time I had visited Sudan, my birth country, I was told the epitome of beauty is long straight hair, a pointed nose, and fair skin. While in UK, I was always surrounded by girls who had long straight hair that blew with the wind. My hair is curly and the two braids my mother always put my hair in felt restrictive. The young kids would laugh at my hair and it made me feel uncomfortable with the way I look. Over the years, I had subconsciously internalised these ideas about beauty and subsequently tried to tame my frizzy hair. I don’t feel the same way now, since there is so much I can do with it. I also feel like the the world has embraced the natural beauty look and there are so many products out there that keep my hair from frizzing

Since that day at the salon, I made a conscious effort to embrace my natural hair and never relaxed it again. I have also tried to become more aware of the unrealistic standards of beauty that society has attempted to impose on me.

I have always had a complex relationship with the concept of beauty and my own femininity. I grew up with an older brother, my only sibling, and my mother's closest friends didn't have any daughters. Thus, I spent the majority of my time playing outdoors or on a game console with my brother. The walls of my bedroom were plastered with posters of sports cars, an interest that was considered "masculine."

It just so happens that my female friends were just like me. We would compete alongside and at the same level as our male peers. My childhood experiences and friends contributed greatly to the fact that I felt far more "in touch" with my masculine side as opposed to my feminine side. I did not know what it was like to be a "girly girl."

This proved to be especially problematic during my teenage years when I was going through puberty. I felt like a foreigner in my own body. The women around me started to make comments about how I should stop playing outdoors, act more ladylike and dress modestly, so my new-found curves didn't show. It felt as though becoming a woman meant you had to follow certain rules and cover up because your body was something to be ashamed of. This only made me reject my femininity further — or, at least, what I was told was feminine; what I was told was "acting like a girl".

I wanted to stay innocent, play outside, and not allow my community's views on how a woman should behave or dress change who I was or stop me from doing the things I loved. Thankfully, my mum was not one of those women, and so she let me take part in sports. On Eid, she would buy me two separate outfits: a dress, that I would awkwardly wear during the ceremony in the mosque, and a shirt with trousers that I would play outside in as soon as I came back home.

It seemed to me that the more I focused on my appearance, the more my insecurities about being a woman surfaced.

When I moved to university, I had the same attitude. Looking pretty most certainly was not one of my priorities, especially as my routine consisted mainly of classes and training sessions. Leaving the court sweating wasn't a "good look" and so I only wore makeup on special occasions. I didn't give much thought to my skin care and hair routine either. I dyed my hair from time to time, but overall my regime consisted of a shower with a moisturising shower gel, shampoo, and conditioner. I would then put my hair in a bun to dry, pull on a pair of jeans, an oversized hoody, a pair of trainers and I was out the door. Simple.

However, as I gradually took part in less sport and moved into a line of work that involved me performing spoken word poetry and speaking on stages, inevitably, I began to make more of an effort when it came to my appearance. I had always written poetry and a lot of my photography work featured sections of my poetry on them, but it wasn’t until I had finished my masters in visual arts that I could really explore it as an art form on its own. At the start, I found this to be incredibly difficult. It seemed to me that the more I focused on my appearance, the more my insecurities about being a woman surfaced.

This changed with time; my earlier work looked at women in comparison to men, alluding to the idea that the more masculine you are as a women, the stronger you are. But, in observing society's expectations of men and denying them the space to express certain emotions, it made me question my own interpretation of what was masculine and what was feminine. The stage is where I was able to unravel my thoughts and come to understand that whether we are men or women, our strengths lie in our ability to communicate who we are, unapologetically through any form of self-expression, be it makeup, fashion, or sport.

It took me some time to realise that there is nothing shameful about being a woman, nor is it wrong for a woman to enhance her beauty through style and makeup, nor is it wrong not to. This does not make her immodest or take away anything from who she is as a person, it's all down to personal choice. Ultimately, it's about keeping a balance. That means, in my opinion, we must not allow society's expectations of beauty to consume us and make us obsessed with our body image. However, at the same time, we should embrace and appreciate our femininity.

After this realisation, I was able to enjoy spending time doing my hair and makeup and dressing in less baggy clothes. Seeing my hair and skin become healthier, and wearing clothes that fit me, made me feel better about myself. I started to experiment more with beauty products to see what works for my skin and hair type. Initially, I looked for the products my mother used to use on my hair when I was younger, then tried many kinds of other products until deciding on a few favourites.

You can be a woman in whatever form makes you happy.

My hair routine now consists of L'Oréal Elvive Extraordinary Oil Nourishing shampoo and conditioner, Lee Stafford Hair Growth Scalp Serum, and Cantu Shea Butter Leave in Conditioning Repair Cream. They all smell exquisite and they keep my hair feeling moisturised. I also sleep on a satin pillowcase as I have learned that cotton cases dry my hair out.

For my skin care routine, I use a black seed face wash every morning and evening, and St. Ives Invigorating Apricot Scrub, as well as The Body Shop's double ended blackhead remover once a week. I also use a dead sea mud face mask every two to three weeks. This routine is simple enough for me to keep on top of my hectic lifestyle, however, I have also found it to be incredibly effective.

This routine is part of what’s made me feel comfortable in my own skin, and if I was speaking to my younger self, I would encourage her to stick with that journey. Now you are a girl and one day you will become a woman. Your femininity is a beautiful thing, so embrace it with open arms. I would tell her that you do not need to be masculine to be who you want to be, there is no shame in being a woman, and you can be strong as a woman. You can be a woman in whatever form makes you happy. Enjoying doing traditionally masculine things does not make you masculine. Enjoy your hair just the way it is. Don't be afraid to be someone who plays sports during the day and puts on a beautiful dress in the evening.

Society will continue to change its mind and define beauty according to trends and the latest "norms." You won't fit that trend or abide by those norms, but don't let that change the way you see yourself. You are beautiful just the way you are.