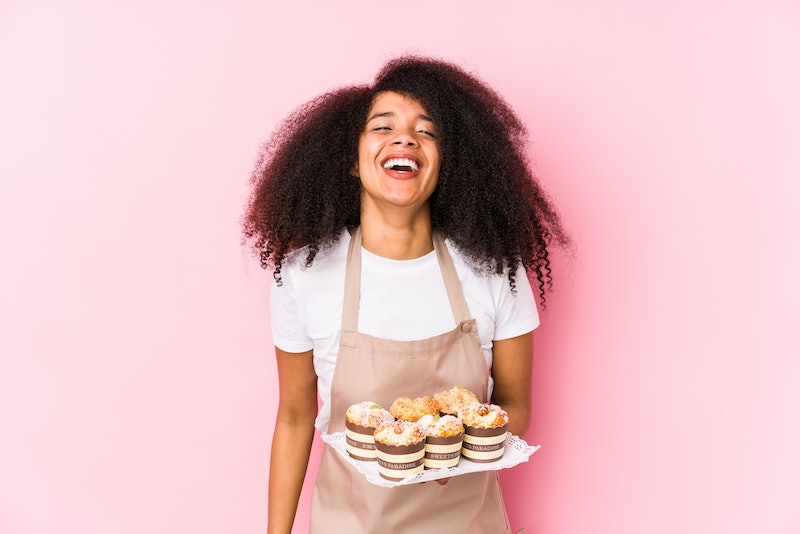 Yes, we are sheltering in place and subsequently spending a lot more time in the kitchen than usual, but that doesn't mean we've morphed into top chefs overnight — no matter how many dreamy French pastry recipes we add to our Pinterest inspo boards. That's why we're all collectively thankful for all the easy viral recipes that are blowing up our Instagram and TikTok feeds lately. Like, seriously, being able to throw together a 4-ingredient whipped coffee drink that looks like it was made by a pro barista really can make my day a little brighter.

Let's also take note of the fact that we're in the middle of Taurus season, which is a great time to explore our culinary fantasies (sensual Taurus energy loves food!) while also working within our limitations (slow-and-steady Taurus energy also loves to play it safe). So while fancy-shmancy Pinterest-worthy recipes seem fun in theory, at the moment I'd much rather tackle something with a short list of ingredients and only a few simple steps. The current state of the world is already stressful enough, and the last thing I need is the ego-bruising of a failed kitchen experiment.

That said, no more scrolling TikTok for an hour before deciding what yummy/easy treat you're going to whip up next. Here's the perfect viral recipe you should try, based on your zodiac sign. And lucky for you, we made sure to include a vegan-friendly recipe option for each of the signs, so you plant-based babies can hop on the viral recipe bandwagon, too.

The classic combination of Oreo cookies and milk just got a major face lift, thanks to the internet. According to some viral TikTok videos, these two ingredients can be combined to create a delicious Oreo cake in a mug — no oven required. It's as easy as grinding up the Oreos, adding milk (and a little baking powder, if you want a fluffier cake), and microwaving it. Easy peasy for an impulsive fire sign to whip up at a moment's notice.

Check out the viral Oreo mug cake recipe and give it a shot. Simply swap out the milk for your favorite dairy-free alternative (like soy or almond milk) to make it vegan.

Dalgona coffee is the gorgeously photogenic whipped coffee sensation that took the internet by storm via South Korea over the past month, and you've basically had to be living under a rock in order to miss it. Like, seriously, #dalgonacoffee has more than 290 million views on TikTok. Although this frothy and creamy coffee beverage looks like something you'd only see served in a fancy cafe, it's actually super easy to make at home by whisking together instant coffee, hot water, and granulated sugar. It'll fit right in with your luxurious at-home lifestyle, Taurus.

Check out the very simple viral Dalgona coffee recipe and indulge. The recipe is already vegan as-is — just pour it over your favorite plant-based milk.

You're always in the know when it comes to the latest trends, Gemini, so you've probably mastered Dalgona coffee by now — but let's get this party started with a White Claw slushie instead. These easy-to-make refreshers went viral on TikTok will give you a buzz but won't take up much time, as it only requires ice, frozen berries, a little vodka, and a can of White Claw, aka everyone's favorite beverage.

Check out the viral White Claw slushie recipe on TikTok, which is already fully vegan, so all of our imbibing 21 and up friends can get in on the trend.

Baking bread during quarantine is a major trend, but with panicky shoppers stocking up on loads of shelf-stable ingredients, yeast has apparently become hard to find. That's likely what led to this old school yeast-free peanut butter bread recipe going viral and making the rounds on Reddit and other social networks. Peanut butter bread sounds odd, but apparently this recipe comes together just right. As a domestic Cancer, you're likely unafraid to tackle an adventure in baking, so give it a go.

Check out the viral no-yeast peanut butter bread recipe. If you'd like to make your loaf vegan, simply swap out the milk for a dairy-free milk substitute of your choice.

If the only ingredients in your pantry include white bread, some oil, and a bar of chocolate, you may not think you have the makings for a delicious treat — but I'm here to inform you that, according to a viral TikTok video, you do. The video for these easy-to-make chocolate-filled "dumplings" sport a cool 3.5 million views on TikTok, and they're sweet and decadent — just like you, Leo.

You love a challenge, Virgo, so here's a recipe that'll take a few extra ingredients and a little more time, but will payoff with a full-on meal that's super healthy, hearty, and still way too easy to believe. Chef Alison Roman's chickpea stew recipe went fully viral after it was shared in the New York Times, and even earned itself a hashtag: #thestew. While it's more of a 10-ingredient recipe than a 2-ingredient one, it's all easy-to-find stuff that you probably have on back stock in your pantry.

Check out the viral chickpea stew recipe for yourself, which is already vegan if you omit the optional dollop of yogurt on top (although Roman notes in New York Times that she'd "never label this a vegetarian stew, lest we omnivores feel as if we are missing out on something," — so just know that it'll satisfy any taste buds).

OK, Libra, you're always willing to put in a little extra work if the result is something adorable, so making the baby pancake cereal that's taking TikTok and Instagram by storm is your new quarant-task. These tiny pancakes can be eaten in a bowl with milk like a classic cereal, or simply tossed on a plate with maple syrup and eaten as what they are: a pile of very small pancakes. The best part is you can use any pancake recipe you'd like — you simply put it in a bag, snip the corner, and squeeze the pint-sized pancakes on your pan. Continue until your pile of baby P's is to your liking.

Check out the viral baby pancake instructions and whip up a batch for yourself. Simply use your favorite vegan pancake recipe or mix for a plant-based version.

Baking in quarantine is basically a collective movement at this point, but no need to complicate things — your soul is complicated enough, dear Scorpio! Whip up a delicious and fluffy dark chocolate cake with very little effort using the ever-popular one-pan chocolate cake recipe from New York Times. This all-in-one recipe has taken over the internet thanks to how dang easy it is to whip up (and how few dishes there are to do after it's all said and done).

Try the viral made-in-the-pan chocolate cake recipe for yourself. And if you're vegan, rest assured that the recipe is already free of eggs and dairy naturally.

I'd ask if you're ready for an adventure, Sag, but I already know the answer. If you're sick of being stuck inside, mix things up by throwing together one of the most interesting viral recipes to hit the scene recently: karumeyaki, a Japanese dessert that translates to "grilled caramel" and is similar in texture and taste to honeycomb candy.

Grab the viral karumeyaki toffee recipe from TikTok and do your thing. If you'd like to make a vegan version, try this vegan honeycomb candy recipe, which only calls for a few simple ingredients.

Cookies are sort of thee classic comfort food — and why deny yourself the endorphin rush they're sure to bring, Cap? Plus, I promise it won't take too much time out of your busy schedule, as the super-viral peanut butter cookie recipe that's been blowing up social media (the original TikTok had more than 4 million views before being taken down) has only five ingredients and is super easy.

Check out the viral 5-ingredient peanut butter cookie recipe for yourself. If you're vegan, simply swap out the egg for your favorite egg substitute, like a flax seed egg or a vegan egg replacer powder, and use vegan chocolate chips (many dark chocolate and semi-sweet chocolate chips are already vegan).

We all know you're not afraid to try new things, Aquarius — so are you brave enough to try bacon strips made out of carrot? Sounds bizarre, but according to a hugely viral TikTok recipe that's making its rounds, it's the real deal. The recipe only requires a few ingredients — carrots, maple syrup, liquid smoke (which adds that classic smoky, bacon-y flavor) and some spices — so you can easily throw this recipe together. Try it for a healthy twist on a savory favorite that can be enjoyed alongside breakfast, thrown in a sandwich for lunch, or snacked upon all day long.

Whip up a batch of your own using the viral carrot bacon recipe, which is already vegan-friendly.

Dalgona coffee is delightful, but what if you could achieve the same fluffy beverage magic except have it be pink? Whipped strawberry milk has gone viral for a reason — it's a fruity and millennial pink version of the coffee drink that took our social media feeds by storm, and it's actually super easy to make. For a dreamy and sweet Pisces like you, it'll be the perfect stay-at-home treat to brighten up your day.

Here's the viral whipped strawberry milk recipe you can try at home. If you want to make it vegan, replace Nesquik's strawberry powder with strawberry syrup, use canned coconut cream instead of heavy whipping cream, and serve over a glass of non-dairy milk of choice.