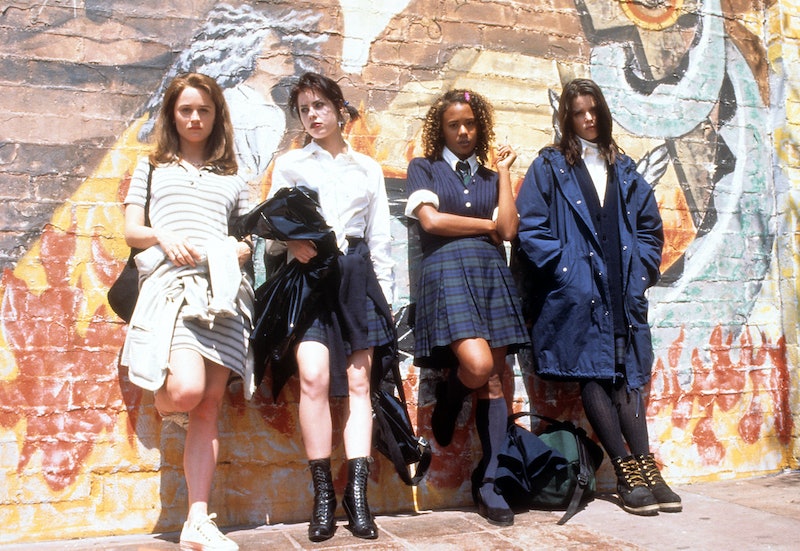 Throughout history, the depiction of the witch has taken on many forms, but the archetype has always been a woman in all black, either wearing a pointy hat and flying around on a broom, or the modern-day counterpart of fishnets, black lipstick, and body piercings. But any real-life practicing witch will tell you that the fashion of witches doesn't necessarily entail all black all the time, nor do witches focus too much of their energy into their wardrobe. After all, the magick doesn’t come from the clothes (though, everyone, whether witch or not, knows how empowering a good outfit can be).

Still, you can’t deny the everlasting popularity of the witch and her aesthetic. According to Google, witches are currently the second most-searched Halloween costume in the country (right after the clown from It). But where, exactly, does stereotypical witch style derive from?

The origin of the witch in the pointy hat is debatable. Some will say it was inspired by the cone-shaped hennins women of nobility wore during the Middle Ages, while others will point to the Salem Witch Trials’ description of the devil as a tall, dark man in a “high-crowned hat.” One interesting theory points to the “witches of Subeshi,” a trio of 4th or 3rd century BCE female mummies discovered in China’s Tarim Basin that wore extremely tall, pointed hats made from black felt. There’s also Mother Shipton, a 16th century English prophetess who was said to have made a slew of predictions that came true, including the Spanish Armada and, strangely enough, the arrival of the internet. She was also depicted as wearing a tall, conical hat.

However, real-life witches might say that none of this comes at all close to being accurate. As Doreen Valiente, one of the founders of Modern Wicca, wrote in the 1978 book Witchcraft for Tomorrow, “the traditional attire of witches is generally believed to be nudity.” In fact, we’ve seen this sky-clad sorceress depiction in movies like 2015’s The Witch, when the main character decides to “live deliciously” and dances naked around a bonfire with her new coven.

Whether it’s nudity, pointy hats, or goth-girl clothing, modern pop culture has given us the most variety in terms of witch imagery. While many of us were first introduced to the concept of the pointy hat-wearing, green-skinned witch as little kids watching the Wizard of Oz, witches in movies and TV have since taken on many incarnations.

There are the colorful Renaissance gowns worn by the Sanderson sisters in Hocus Pocus, Samantha Stephens’s elegant 1960s housewife garb in Bewitched (though, let’s not forget the fabulous caftans her mother, Endora, wore), and the casual, ‘90s style of Practical Magic’s Owens sisters, played by Sandra Bullock and Nicole Kidman.

More recently, American Horror Story: Coven and Apocalypse puts its witches in classic black, yet stylishly modern outfits, while 2016’s The Love Witch portrayed a witch with a fondness for a ‘60s style aesthetic. And Chilling Adventures of Sabrina gave its main character an updated, witchier spin on Gossip Girl-like style, complete with headbands as hair accessories.

Then, there’s of course, The Craft, which is arguably one of the most influential witch-themed films. The four main characters, Nancy (Fairuza Balk), Sarah (Robin Tunney), Bonnie (Neve Campbell), and Rochelle (Rachel True), zhuzhed up their private school uniforms with black vinyl jackets, fishnets, and spiked dog collars — the kind of witchy, bad-girl look that’s easy to copy and hard to resist.

Deborah Everton, the film’s costume designer, had to consider several different factors when creating the costumes: She had to depict them as witches, convey accessible teenage style, consider the limitations of their school uniforms, and keep each characters’ arc at the forefront, all at the same time. “My job as a costume designer is to tell the story of each character through what they're wearing. Not so much tell the story of witchcraft, but for each character to emote visually what's going on inside of them,” Everton tells Bustle.

She loosely based the girls’ looks on the four earthly elements — earth, air, fire, and water, which are considered sacred to Wiccans and are often invoked in ritual. “I did some rudimentary witchcraft research, which led me to the elements and the colors used to summon different things,” Everton says. “Nancy was fire, using destruction to rebuild, and Sarah was the air element because fire can't really combust without air. So, when she's introduced into the group, it really takes off.” Everton focused on that concept, then “brought everything up a couple notches” and made it cohesive with the girls and their school uniforms.

Ask any witch who discovered magick due to the film or at least during its time, and you’ll more than likely hear that they were influenced by it — myself included. “Everyone wanted to be Nancy,” Everton laughs. Even 23 years later, that statement could very well be true. Sorting through the 3.4 million #witchesofinstagram hashtags, you’ll quickly come across Nancy Downs’s sartorial influence. Fashion retailer Dolls Kill, known for its edgy fashion catering to Gen Z and millennial-age punks, goths, and club kids, has embraced the witchy aesthetic for years, and even has a collection inspired by The Craft. As evidenced by the vinyl pants, fishnet tops, and suspender skirts, Everton’s influence is clear (though she says she was not involved with the collab).

Real-life witches will admit to being influenced by those portrayed in pop culture. Pam Grossman, host of The Witch Wave podcast and author of Waking the Witch: Reflections on Women, Magic, and Power, says witchy women in music, like Tori Amos, Kate Bush, and Stevie Nicks have had an impact on her own personal style, but so have occult-centric visual artists like Remedios Varo, Vali Myers, and Marjorie Cameron. “I'm drawn to otherworldly, unusual aesthetics, and all of these artists have very much embodied the notions that art is magic and adornment is enchantment,” Grossman tells Bustle.

Gabriela Herstik, author of Inner Witch: A Modern Guide to the Ancient Craft, says her most influential style icon was Morticia Addams. “She embodied the darkness and glamour that I always associated with witchcraft,” Herstik says, adding that AHS: Coven also had an impact on her wardrobe. “I have never been super trend-oriented; I always take what I like and incorporate it into my own style,” she says. “When Coven came out, there was a boom in the witchy, bell sleeve, black-on-black dresses I already liked, so that influenced my style because they were easier to access.”

But aside from the sartorial appeal, some witches dress in a way that relates to their beliefs or magickal work, like legendary witch icon Laurie Cabot, known as Salem’s Official Witch, whose clothing — which falls in line with traditional black witch-wear — is specifically part of her practice. “I had made a vow to my goddess that I would wear the black robes and never take them off,” she once told Boston.com of the public reaction to her look when she first came to Salem in 1971. “Of course I was very naive. I didn’t think that being portrayed in black robes would be shocking to people.”

Herstik and Grossman also follow this. “I'm intentional about the jewelry I wear, and often charge special pieces up on my altar before I put them on,” Grossman says. “Though there are many deities I feel a connection to, Artemis, the Greek goddess of the moon and the wild, is someone I actively venerate, and so I often wear moons, arrows, and deer to honor her. I've also worn a skeleton key in some form or another since I was a teenager, and that symbol is linked to Hecate, the Greek goddess of witchcraft.” She adds, “Jewelry can be decorative, talismanic, and devotional, and in my case, it's usually all three at the same time.”

Herstik says that the silver jacket she frequently wears acts as a “protective mirror” or shield. “I also have necklaces and jewelry that I have dedicated and created into talismans, and a cloak that I wore to officiate my friend’s wedding that she gave it to me to use in ritual and ceremony,” she says. Herstik also uses her makeup routine as a form of spellwork. “Putting lipstick on shifts my energy and as a Libra rising and Venus devotee; glamour is naturally part of my craft, regardless of what I wear,’ she says. “I also have lingerie that I will wear in ritual, alongside adorning myself in perfumes, oils and lotions.”

One of the magickal topics Herstik writes about in her book is glamour, which is the act of concealing something, of placing a veil over it so it looks differently. (You might remember it being referenced in The Craft, when Sarah appears to go blonde without any bleach.) There are many ways to work with glamour, Herstik says, but one of her favorites is through style and self-adornment. One of the ways she does this is by setting an intention with her outfits in the morning. “You can pull a tarot card for style inspiration, then pick colors to correspond with this,” she says. “If you want to feel safe and protected, you may want to wear black, if you want to feel relaxed and calm, you may wish to wear blue. You can wear or carry crystals to further this message or intention, and wear pops of color through your clothing, nail polish or makeup to help.”

Whether a witch, or a non-witch, for that matter, is inspired by a movie or wears clothing that helps her feel strong, confident, and powerful, that’s always going to be a positive thing. Everton kept this in mind when she dressed the girls in The Craft. “The whole thing was about girl power. That was the first and foremost thing in my mind,” she says. “I knew who my audience was — it was young women. And I wanted them to feel empowered, and I wanted them to feel good.”

More like this
15% Pledge Director LaToya Williams-Belfort On The Impact Of Supporting Black Business
By Dominique Norman
Harry Styles’ Red Carpet Looks Have One Thing In Common
By El Hunt
The Biggest Runway Trends From Milan Fashion Week 2022
By Allie Fasanella
Bella Hadid's Best Runway Looks Of All Time: From Paris, Milan, & More
By Allie Fasanella
Get Even More From Bustle — Sign Up For The Newsletter