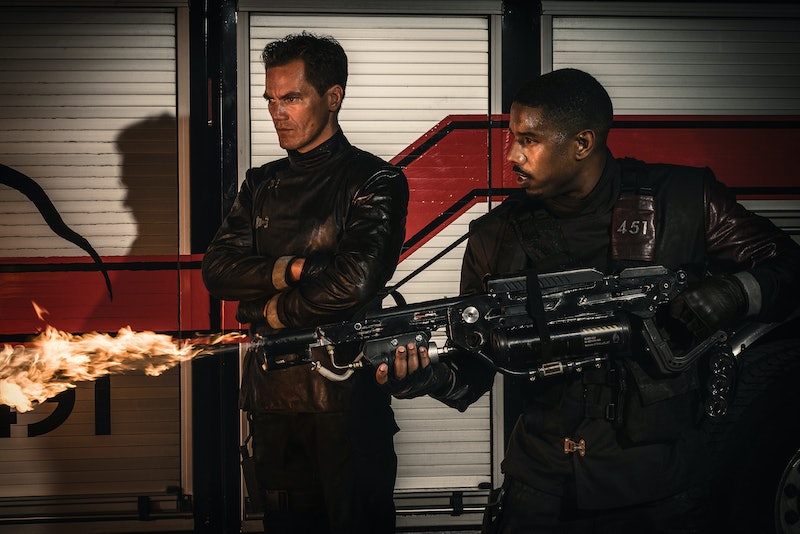 "A little knowledge is a dangerous thing," or so Captain Beatty, played by Michael Shannon, ominously informs his mentee in the first trailer for HBO's upcoming movie, Fahrenheit 451. Just like that, the adaptation of Ray Bradbury's chilling, book-burning dystopia feels more relevant — and more urgent — in 2018 than it ever has in the 65 years since its original publication. In our current political and cultural climate, where the threat of censorship, misinformation, propaganda, and library defunding increases daily, Fahrenheit 451 seems like a cautionary tale we should all be paying attention to.

When The Handmaid's Tale premiered just three months after the inauguration of Donald Trump, it felt like a perfectly timed allegory for the new era. Like Margaret Atwood's provocative novel, Hulu's small-screen adaptation seemed to share chilling similarities with the realities of 2017: a hyper-conservative political party of mostly white men came into power, a newly invigorated war against reproduction rights waged on, and women's rights to body autonomy were being dangerously eroded from all sides.

A year later, HBO's upcoming adaptation of Bradbury's Fahrenheit 451 feels just as timely, and just as necessary, in 2018 as The Handmaid's Tale did in 2017, and not just because of the man sitting in the Oval Office. In the context of the realities of American society, this dystopian narrative feels like an urgent warning against fake news and propaganda, our reliance on screens and the dangerous distractions they pose, and peril of inaction in the face of universal threats to our democracy. It also provides an action plan for how to fix it.

Like the original novel, the updated screen adaptation of Fahrenheit 451 is set in a world where books have been outlawed, history is controlled and censored by those in power, and the media is a dangerous and omnipresent distraction. The story's protagonist, Guy Montag (played by Michael B. Jordan), is a fireman whose job it is to burn books, as well as the possessions of anyone found reading them. With encouragement from his boss and mentor, Captain Beatty (played by Michael Shannon), Montag is fully committed to the cause — that is, until he meets his precocious young neighbor, Clarisse, who makes him question the society he lives in, and his own role in maintaining it.

Although it was originally written in 1953 as a reaction to the Cold War, the rampant spread of McCarthyism, and the rise of mass media, Fahrenheit 451 has a lot to offer modern viewers who will see their technologically dependent world reflected on the screen. Not unlike the society Montag lives in, Americans in 2018 are constantly plugged into our screens to the point that we often miss real-world experiences and interactions for online ones. According to two recent studies, Americans watch almost 35 hours of TV every week, and spend nearly another 28 hours on our cell phones. That means that we are plugged into technology and consuming media more hours a week than we are working. It also means that we are leaving ourselves less and less time to simply think. With so many everyday distractions, there are few opportunities to examine or question the realities of modern life.

Aside from our reliance on technology and the danger that it poses, Fahrenheit 451 echoes 2018 in even more alarming ways. Like the story's fictional government, the newly empowered GOP has been going to extreme lengths to control the flow of information the American people see. The party's leader, Donald Trump, frequently discredits media outlets that disagree with him, and he even went so far as to hand out "Fake News Awards" to organizations like CNN, the New York Times, and the Washington Post. As the president attempts to repudiate the free press, however, there are entire websites dedicated to the many false statements Trump has given that serve as further evidence that the reality the he is trying to convey is, in fact, fiction.

Books and free speech also come under attack during the Trump administration. A new federal budget proposal could mean drastic cuts for libraries and the many essential programs they provide to both children and adults. In the past six months, several controversial book bans have been proposed in institutions across the country, including a dangerous petition to label and separate LGBTQ+ titles from the rest of the collection at a public library in Iowa. In addition to limiting American's access to reading material, Trump has also expressed a desire to censor the media through Senate investigations of news outlets that publish damning articles about him. Oh, and lets not forget the fact that Russia successfully spread damning propaganda during the 2016 election, yet have failed to face any consequences because of it.

It seems as though, 65 years after its original publication, Fahrenheit 451 has, at least in part, predicted the future. Luckily for the book's readers and the upcoming adaptation's viewers, it also offers a solution.

The release of HBO' Fahrenheit 451 isn't only important because of the many ways in which it can serve as a mirror Americans can see their reality reflected in. Its timing is also crucial because of the story's ability to teach us how to do things differently. In the original novel, one of Montag's mentors, Professor Faber, attempts to explain what makes books, facts, and knowledge sustainable in their society again: quality information, sufficient time to comprehend and question it, and the ability to take action based on what you've learned. The lesson he passes down can serve as an action plan to Americans everywhere. Now more than ever, it is important to seek out the facts, question the stories we're being told, examine what is distracting us and why, and make new choices based off of what we've learned. It might be easy to blame our issues on the president or the GOP, but the current political and cultural climate we find ourselves in isn't just a consequence of Donald Trump's election. It's the result of decades of inaction and complacency.

When asked whether or not Fahrenheit 451 was a condemnation of Donald Trump, the adaptation's director Ramin Bahrani explained his film was more than that. “He’s just an exaggeration of that now,” Bahrani said of the president. “And I don’t want us to forget what Bradbury said: We asked for this.”

Maybe after seeing Fahrenheit 451, Americans will be ready to ask for something different.