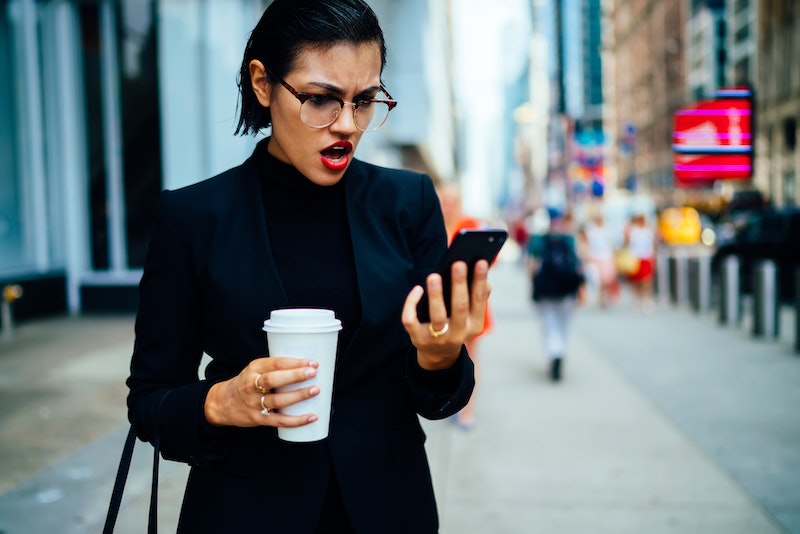 We see it playing out all the time to extreme degrees in celebrity culture; someone wants to get back at their ex so they blast them on a podcast, or send out a scathing tweet. They might even throw shade in a brand new music video, which Miley Cyrus supposedly did with "Don't Call Me Angel," according to InTouchWeekly. But even when it comes to us regular folk, it's still common to want the last word, or to seek some form of mild revenge after a breakup.

The thing is, there are also plenty of people who accept when a relationship is ending and move on without holding a grudge, or searching for ways to even the score. So wherein lies the difference between those who can forgive and forget, and those who feel compelled to get back at their ex, in one way, shape, or form?

Experts say a person's reaction can be impacted by how the relationship came to a close. "If [it] ended in a dramatic or particularly troubling way, it could create anger towards an ex," Jonathan Bennett, a relationship and dating expert at Double Trust Dating, tells Bustle. "For example, if someone broke up over text or ended it due to cheating that would create more resentment than a mutually agreed upon breakup."

Following a split, and especially a shocking one, "many people want to get 'back' at their ex as they feel their self-worth has been affected by the [breakup], and this can happen at a very subconscious level," Nancy Ruth Deen, a relationship expert and owner of HELLOBreakup, tells Bustle. "We find it difficult to deal with how hurt we are, so instead we focus our attention on getting back at our ex to relieve the pain of heartbreak."

The desire to soothe this pain can also be more intense if the relationship was problematic, and the person is realizing the impact it had. As Bennett says, "Sometimes a partner might look back [...] and clearly see bad behavior like cheating [...] and toxicity that was previously missed." The breakup gives them clarity, and once they have enough time to fully digest what happened, they may find themselves feeling angry or resentful.

Whether they act on that resentment, though, can largely come down to personalty. "Everyone reacts to events differently based on personal attitudes and core values," Bennett says. "The same is true of breaking up. Some people are more laid back and forgiving while others are more emotional and hold grudges." And, he says, maturity levels can also come into play.

If someone's always had a hard time letting go, or if this is their first breakup, they may not think twice before stirring up drama on social media, or meddling in their ex's life. While they may feel better in the moment, the reality is it can quickly spiral out of control, and even make things worse.

In terms of payback, "many people want their ex to fail in new relationships," Bennett says, so they may do whatever they can to ensure that happens. This might include sending messages to the new partner, he says, or trying to undermine the ex in some way. "Some people try to get back at an ex by revealing what they think is damaging information to coworkers, friends, family, and even the new partner," Bennett adds, which is, of course, never OK.

It could also be more benign, such as spending way too much time on social media, and hoping their ex will see favorable posts. "The quintessential look-how-great-I'm-doing-post-split selfie is a big one," Deen says. And also counts as a way of "getting back" at an ex.

The temptation to seek revenge after heartbreak can be tempting. Emotions are running high, and if cheating or other dramas were involved, it can leave a person feeling quite hurt and angry. Reacting, though, only makes things messier and rarely results in anything helpful or soothing. And that's why it's so important to pause, first, before doing something regrettable.

"If you feel like you want to get back at an ex, the first thing to do is acknowledge the feelings that have led you to this point," Bennett says. "Be honest about the anger, frustration, sadness, and anything else that you might feel. Don’t try to suppress your feelings. Talk about them with a friend or, even better, a therapist." This is where you can process a toxic relationship, or vent about the breakup in a more constructive way.

From there, begin finding ways to move on. This almost always starts with unfollowing an ex on social media, so as not to receive a play-by-play of their life. "If you’re constantly seeing what your ex is doing, it can trigger your emotions and you can overreact," Bennett says. "By blocking your ex, you’re putting them out of sight and out of mind."

It can also help to stay as busy as possible and channel energy into other, more positive endeavors. Go out with friends and do what you love, Bennett says, as this will ease your mind and make it possible to think about something else. Pick up hobbies, focus on work, and have fun.

And finally, after some time has passed, consider dating again if that feels right. "By meeting new people," Bennett says, "you’ll start building new romantic relationships that can allow you to replace your ex. You’ll also reinforce the idea that your ex isn’t worth your time with so many fish in the sea." Getting back at an ex may feel right in the short-term, but finding ways to properly move on while focusing on other, more important things, will ultimately feel so much better.