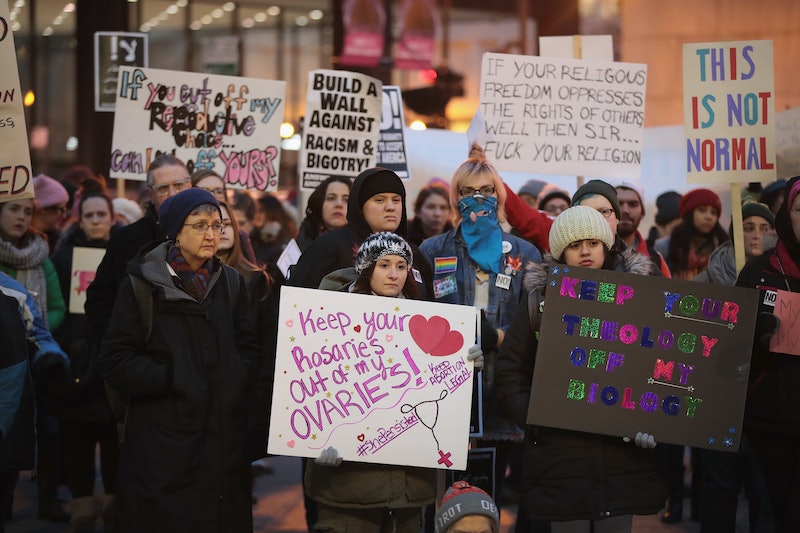 With many states (and now potentially the federal government) working to restrict abortion access, reproductive rights advocates have cited many facts and figures to show why that's a bad idea. On top of that, though, are all the stories about what getting an abortion was like before the Roe v. Wade decision — and if these experiences don't make what is for many lawmakers (particular cisgender men) a theoretical discussion into reality, then honestly, I don't know what will.

A new video by The Scene puts faces and voices to this issue by giving women who got abortions before Roe v. Wade a platform to tell their stories. It's especially timely given that Norma McCorvey, the plaintiff in the case that made state prohibitions on abortion illegal, died Saturday — and the rights she helped secure are increasingly in danger.

Research suggests that restricting or outlawing abortion access doesn't cause fewer abortions; it just drives them underground, making them less safe. Countries where abortion is illegal actually have higher abortion rates, and in 2011, as U.S. state laws restricting abortions spiked, more Americans — particularly in these very states — were searching for tips on self-induced abortions.

The video is a testament to this pattern. The women tell stories of themselves and others getting abortions from underground providers or performing them themselves, leading to medical complications, psychological trauma, and even death.

One was sexually abused by her abortion provider. She tells an extremely disturbing story of him molesting her immediately following the procedure, after telling her to keep herself sexually "pure." And she couldn't ask for help because that would mean making it known that she got an abortion.

The only time recipients of abortions did end up at the hospital was when they were at death's door. One woman who worked as an intern at a hospital in the '60s saw three people die from abortions. One died after getting a perforated uterus and bowel from a coat hanger abortion. Another patient, who was already a mother, died of tetanus.

These deaths are totally preventable, she points out. There were only four reported abortion-related deaths in the United States in 2012. It's more dangerous to get your wisdom teeth out. But if they're performed outside of medical facilities staffed by professionals, the safety level of the procedure drastically reduces — and if our abortion rights are taken away, that's exactly what will happen. Repealing Roe v. Wade won't stop abortions from occurring; it will simply make the ones that do occur extremely dangerous.

Another woman in the video nearly died herself. Because the provider didn't remove all the tissue, she developed an infection called perotinitis that left her in the hospital for two weeks. She would be dead if she had waited just a few more hours to go to the hospital. She had to choose between risking death and risking getting arrested.

While she was there, the police came and asked who had almost killed her. But she didn't give away his name because she felt that having a subpar abortion provider available to others was better than having none at all.

Another was able to get an appointment through her doctor father, which she points out was a privilege. Indeed, when abortion rights are restricted, it's economically disadvantaged people who suffer most. Between 2008 and 2010, two-thirds of abortion seekers lived below the poverty line, according to a University of California-San Francisco study. Because these people had to save up money for abortions, they often got them later, making them more expensive and less accessible due to state laws and lack of facilities.

Many of the women emphasized that this is where we could be again. If Donald Trump continues choosing pro-life justices, he could accomplish his goal of overturning Roe v. Wade. And a country where abortion access isn't guaranteed, as this video shows, is incredibly dangerous for our physical and emotional well-being.

More like this
7 Women Share Their Best Orgasm Stories
By Lexi Inks
Your Daily Horoscope For August 10, 2022
By Mecca Woods
Samsung Just Dropped 2 New Foldable Smartphones
By Michelle Toglia
TikTok Is In Its Elle Woods Era
By Meguire Hennes
Get Even More From Bustle — Sign Up For The Newsletter