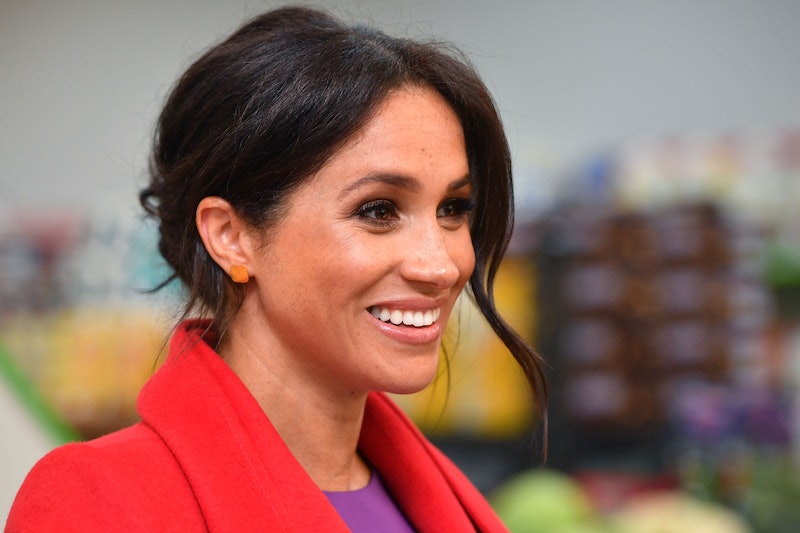 When it comes to signature looks, tons of celebrities have them. Whether you're obsessed with Ariana Grande's ponytail or can't imagine Reese Witherspoon without blonde hair, there are some hairstyles that are just instant classics. Meghan Markle's messy bun, her longtime go-to chic 'do, is one of the royal's most well-known, but the Duchess of Sussex rocks more than just loose waves around her face — and she's worn many different gorgeous styles over the years.

While you were probably paying attention to all the bespoke Givenchy dresses Markle has been wearing or figuring out where to purchase some of her more affordable outfits, the Duchess has also been changing up her hairstyle, from ponytails to blown-out waves. And she loves a good bun: Although her signature "messy" bun is the most iconic, she's also worn pulled-back middle-part buns, side-swept buns, low buns, half-up buns, and more. She also mixes things up with different types of ponytails, from a low and loose pony to more pulled-back styles.

Ahead, Markle's most iconic looks since becoming a member of the royal family.

Markle rocked a blowout during her engagement photo call in Nov. 2017 as well as to events both before and after getting married. The look is both simple and effortless and is next in line for her most signature look after her messy bun.

Of course, Markle's messy bun is potentially her most well-known look. The Duchess began wearing it to official events in Jan. 2018 following her engagement.

The bun is so iconic that she even wore it not once but twice for her May 2018 wedding.

She wore a more styled version to the ceremony and a looser look to the reception. Like her blowout, this look hasn't gone anywhere she since becoming a duchess.

Although waves seem to be Markle's go-to look, she's also worn her hair in a straight blowout.

Markle's bun has had a couple of iterations since her engagement, and one of her first departures from the messy look was this structured side bun for the 2018 Royal Ascot.

While in Ireland, Markle switched up her bun again and tied back the tendrils that often fall around her face.

The more formal look is another that has remained popular with Markle, especially for dressier events. She wore the hairstyle when presenting her wedding gown designer Claire Waight Keller the British Fashion Award for Designer of the Year.

She also wore the look as recently as a year and a half ago, when she showed off her bun to a performance of Cirque de Soleil that benefited Prince Harry's charity Sentebale.

Markle tends to rock a wave more than a classic curl, but this finger wave looks perfect on the Duchess of Sussex.

Markle's bun got yet another iteration during a trip to Australia. At the Invictus Games medal ceremony, she rocked a half-up, half-down bun.

It's not the only time the Duchess has worn her hair both half-up and half-down. She also tried a looser, more romantic look while in Australia.

While Markle certainly seems to prefer buns to ponytails, it doesn't mean she hasn't worn one. This slick back style is a classic — and totally copyable.

Yes, Markle wears a bun quite a bit, but don't mistake her chignon for one. This look, from her time in Fiji, is so pretty with its volume and floral details.

Unlike her slick, more formal ponytail, Markle has also worn a lower, looser version. She was at the Hub Community Kitchen when she wore the pony, and it's the perfect style choice for a less formal event.

In an outing to the National Theatre, Markle decided to switch up her bun look again, sweeping a bit of her hair to the side and behind her ear.

Okay, is Meghan Markle really wearing a sock bun? Probably not, but the donut-shaped bun is another recent version, and she just might be responsible for the resurgence of said sock/ballet/donut bun hybrid.

Markle's low bun at the Lion King premiere is a marked departure from her signature look, and it sits a bit lower than her other styles. This tightly wrapped bun's position at the nape of her neck differentiates it from others.

Markle's makeup caught the world's attention when she attended the Endeavor Awards in March 2020. The smoky eye and bold lip were a major departure from her usual inclination toward neutrals. Her hair underwent a change, too, as she opted for an ultra-low pony.

During one of her final official royal appearances, Markle ditched the signature waves she typically wears and opted for straight, middle-parted locks that look so chic with her cape dress.

More like this
Hailey Bieber’s Best Hair Moments From 2013-2023
By Audrey Noble
8 Breakout Hair Color Trends For Spring 2023
By Audrey Noble
Blake Lively Debuts Red Hair For The 'It Ends With Us' Film Adaptation
By Olivia Rose Rushing
The Best Beauty Looks Spotted At Paris Couture Week 2023
By Audrey Noble
Get Even More From Bustle — Sign Up For The Newsletter
From hair trends to relationship advice, our daily newsletter has everything you need to sound like a person who’s on TikTok, even if you aren’t.

This article was originally published on Feb. 4, 2019