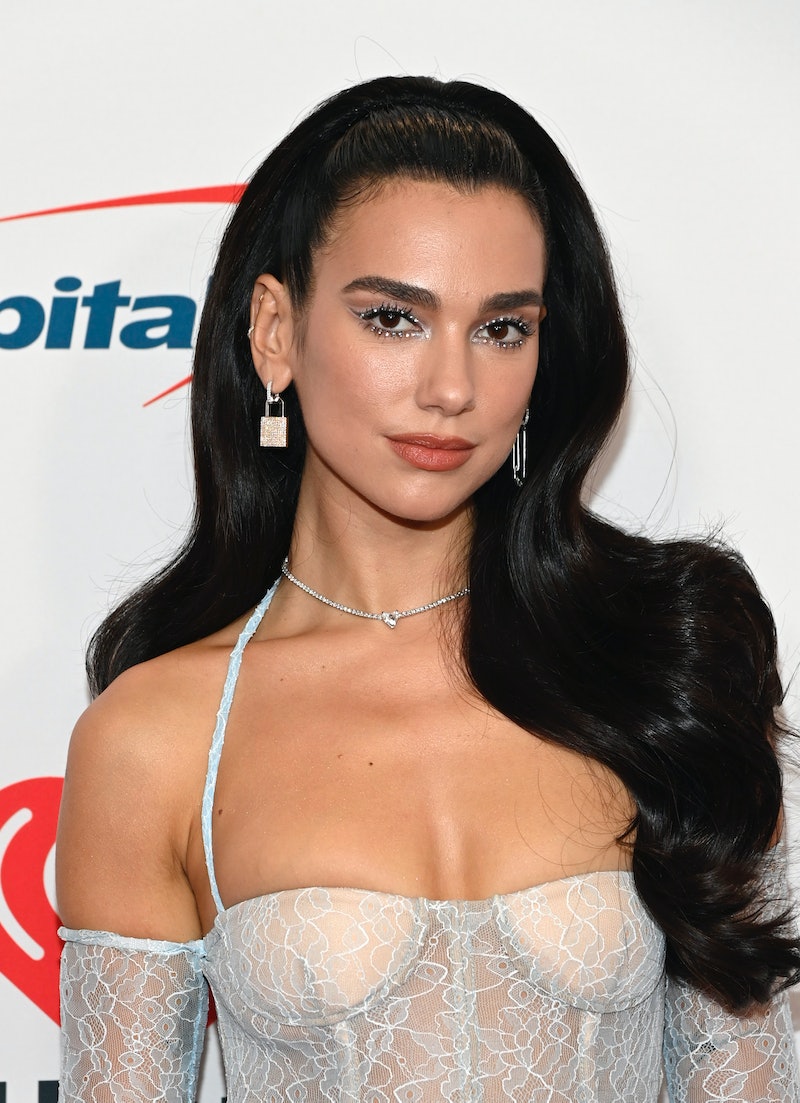 All of a sudden, face gems are everywhere. The bejeweled rhinestone accents have been spotted on the catwalk during Fall/Winter 2022 Fashion Week, celebrities like Addison Rae and Dua Lipa, and countless scenes in Euphoria — the latter of which is commonly cited as the origin of the trend. But, according to experts, these sparkling facial adornments are simply another retro trend coming back into style.

According to Nicholas Lujan, director of education and artistry at Kevyn Aucoin Beauty, face jewels initially rose to prominence in the early ’90s as grunge and glam rock staples. “Gemstones make recurring appearances in fashion and makeup every 10 to 15 years,” Lujan tells Bustle. “Think Gwen Stefani in her earlier No Doubt years.” Melissa Hernandez, celebrity makeup artist and director of artistry at Pley Beauty, similarly cites Björk as a pioneer of the look: The singer actually sported eye gems on the cover of her 1993 album, Debut.

Fast forward to the turn of the century, and face gems shined as Cher’s glamorously glittery eye makeup in her “Dov’e L’amore” video, and bedazzled Jennifer Lopez’s complexion in “Waiting for Tonight.” And yet, despite this groundbreaking glam, the rhinestone makeup aesthetic didn’t truly enter the mainstream until Euphoria (and social media) came along. “The face gem trend was absolutely amplified by the looks from Euphoria, making them more mainstream versus only being seen at high-fashion editorial shoots and on runways,” Jamie Greenberg, celebrity makeup artist, tells Bustle, adding that the general attitude towards makeup — especially that of the “bold” variety — has recently evolved. “The culture is changing, and folks are wearing makeup as a form of self-expression,” she says. “Eye gems and stickers are for daily use; it’s no longer about special events or going to concerts to wear bold makeup.” Thus, the makeup industry has followed suit, producing easy-to-DIY eye gems and stickers for all your face bedazzling needs. Read on for how to master the look, according to experts.

There are two ways to go about wearing face gems: the traditional route, which consists of manually gluing each gem to your skin and thus creating an “original” look, or the more modern technique of using pre-made stickers. Neither is better or worse — it all depends on your preference. In fact, even Euphoria’s makeup artist Donni Davy has done both, having worked with Face Lace to create some of the show’s more intricate looks.

“When Donni was planning looks [for Euphoria] and just starting to film, she reached out to Face Lace as she felt stick-on makeup was perfect for the experimental makeup aesthetic of Gen Z,” Phyllis Cohen, CEO and chief designer of Face Lace, tells Bustle, noting that she’s personally been experimenting with stick-on makeup since the ’80s. “I began to play around with the idea of stick-on makeup to make sure that, even in a ridiculously short time, I could produce an intricate look I was proud of in almost no time whatsoever.” Thus, if you’re short on time or new to more advanced-seeming eye makeup, stick-ons like the ones from Face Lace might be the way to go.

Something else to consider is your skin’s sensitivity, as traditional face gems do require lash glue for application. Stickers, on the other hand, are customarily formulated with medical-grade hypoallergenic adhesive. So if you’ve ever reacted to lash glue, you’re best off opting for stickers instead.

How To Apply Face Gem Stickers

According to Greenberg, you should always start your sticker application after you’ve finished the rest of your makeup look. Pro tip: Lightly brush some mattifying setting powder on the surface you plan to decorate with jewels.

Once your skin is prepped, simply place your gem stickers where you’d like them to go. Cohen also advises matching up the points on the inner corners of the eye to ensure it looks symmetrical. “If you’re new to face gems, I recommend using Pley Things by Pley Beauty," Hernandez tells Bustle. “They’re self-adhesive, making it super easy to build an effortless look in no time.”

Greenberg reiterates that using stick-on makeup doesn’t mean you can’t get creative. “I love mixing and matching to create a unique look. For stickers, I love the Lime Crime Holographic Face & Eye Stickers, which come with holographic eyeliners as well as smaller stickers in various shapes to be used as freckles, eye gems, or anything you want!” Similar products are available from Face Lace and SimiHaze Beauty as well.

How To Apply Face Gems With Glue

For glue-based face rhinestones, Hernandez says you’ll just need tweezers, latex-free eyelash adhesive, and gems. As with stick-ons, she recommends applying these as the very last step in your makeup routine. This way, you won’t tarnish them with other makeup products.

Once you’ve finished your makeup, prep the area you plan to decorate with finishing or setting powder. Then, Lujan says to apply latex-free glue to the areas you want your gems to stick. “[Use] the kind of adhesive that is white with a blue iridescent quality, then dries clear,” Lujan explains, adding that you want the glue to get “tacky” before adding the gems so that they stick properly.

Finally, it’s time to add the gems. “Using tweezers, pick up the gem with the flat side down, and place it on top of the glue,” instructs Hernandez. “Repeat these steps until your design is complete.” Et voila: You’ve mastered the bedazzled aesthetic.