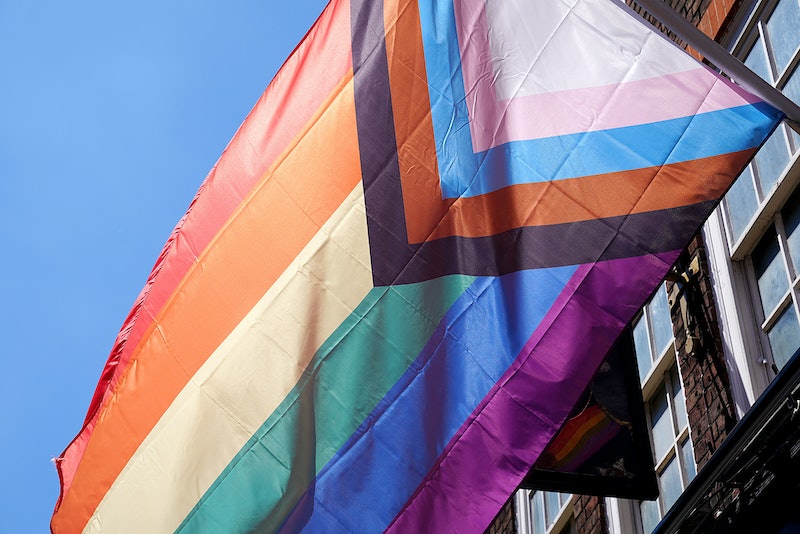 You know what puts the L, G, B, T and Q in LGBTQ+. But you’re not alone if you keep seeing unfamiliar hashtags on TikTok and wondering what you missed. Just how many different identities are there, anyway? Learning the meaning of LGBTQ+ identity labels that aren’t lesbian, gay, bisexual, trans, or queer can help people suss out the labels that feel best for them.

“I see identity words not as the conversation, but as doorways to understanding,” says LGBTQ+ activist, educator, and speaker Robyn Ochs. “When someone tells you how they identify, an appropriate and productive response would be to thank them for sharing this information, and to ask them if they would be willing to tell you more about what their identity means to them.”

Isn’t the whole point of a label to define something specific? Sure, but identity labels are more complicated than that. “Definitions are always shifting and changing, which is something that's fairly common in the language evolution of marginalized populations,” explains Jen LaBarbera, the education and advocacy manager at San Diego Pride. “Every queer person can define what their chosen label means for them.” In other words, if you and your roommate are both outside the gender binary, but you use the term nonbinary and they prefer genderqueer, more power to both of you. In fact, a 2019 study of 66 LGBTQ+ teens found that over 36% used non-traditional labels for their sexuality, and nearly 20% used non-traditional terms to describe their gender identity.

These labels are important for people’s sense of self and community, says Salem Joseph, the youth leadership developer for The Lesbian, Gay, Bisexual & Transgender Community Center. “It can feel liberating to have language that describes some of the similarities in your lived experience if you have grown up in isolation or limited connection to the community,” she tells Bustle.

Ever wondered about the plus in LGBTQ+? Read on for a guide to queer identities beyond L, G, B, and T.

What Does It Mean To Be Asexual?

Someone who falls on the asexual, or ace, spectrum may have little or no interest in having sex and often do not experience sexual attraction for anyone. Ace folks may or may not experience romantic attraction. Some ace people do have and enjoy sex, though — it’s just not a primary way to share intimacy.

There are a bunch of different identities that fall on the ace spectrum. Demisexual folks, for example, only experience sexual attraction once they know someone really well and are very emotionally connected to them. Grey-asexual people might have very low sex drives or only feel sexual attraction very rarely or in specific circumstances.

“I identify as grey-ace because saying I’m fully asexual doesn’t quite feel right,” says a 25-year-old nonbinary person, who asked to remain anonymous to protect their privacy. “I do get turned on by random people sometimes, but it’s so rare that I’m definitely not allosexual [someone who regularly experiences sexual attraction].”

Important to note: ace people who experience romantic attraction can be gay, bi, straight, or any other romantic orientation. “I’m definitely queer romantically,” the anonymous nonbinary person tells Bustle. “Sex just doesn’t come into play for me in relationships.”

What Does Aromantic Mean?

Aromantic folks fall on the ace spectrum, but there’s a whole aromantic spectrum of its own, too. In brief, aromantic people may not experience any romantic attraction — that feeling that you want to date someone, versus just have sex with them. Demiromantic folks will only be romantically attracted to someone once they’ve gotten close to them emotionally. Greyromantic people might be romantically interested in people very rarely or only under certain conditions.

“Queerplatonic relationships are my jam,” says Tasha, 25, who is aromantic. “I have a person that I’m in a committed, deep relationship with, but it’s just not romantic. It’s much more than what society expects ‘gal pals’ to be, so people totally think we’re sleeping together. But we’re life partners, not partners partners, no matter what other people see us as.” Think Watson and Sherlock in Elementary: totally in love with each other, but platonically — partners for life in everything except that.

What’s The Difference Between Bisexuality & Pansexuality?

“If you ask 100 people who identify as bi, or 100 people who identify as pan, you will get a range of answers [about definitions],” Ochs tells Bustle. “People most often understand bisexuality as the self-recognized potential for attraction to people of more than one gender,” Ochs explains. “Pansexuality is for some people attraction to all genders. For other pan people, gender is irrelevant to one’s capacity for attraction.”

The words that people use to describe themselves ultimately comes down to what feels right for each person. “I’m bisexual, and my roommate is pan,” says Max, 34. “He’s a little younger than me, so he knew about pansexuality fairly young. I’m an old fart, so bisexual was the first term I knew that fit me — and it stuck. We both have our preferred terms, but we agree on the fact that people of all genders? Cute.”

What Does Intersex Mean?

Intersex is an umbrella term that can include folks who have a range of differences in their reproductive anatomy or sex traits. “Put simply, the definition of ‘intersex’ is having genitalia, hormones, internal anatomy, and/or chromosomes that differ from the ‘typical’ way that human bodies develop,” LaBarbera says. “The best estimates are that intersex folks are about 2% of the population — that is, about as common as (natural) redheads or twins.”

Putting the I into LGBTQIA is not some “new” thing. “Intersex folks have been advocating for their own rights and autonomy for generations,” LaBarbera tells Bustle. That advocacy is largely necessary because intersex infants are often given cosmetic genital surgery to make them appear more traditionally cisgender and binary.

“I was lied to growing up,” says a 29-year-old anonymous intersex trans guy. “I was a baby and couldn’t consent to surgery, but the doctors convinced my parents that surgery was best for me. They raised me as a girl without ever telling me that I’m intersex. I was forcibly assigned female at birth, but now that I know who I really am, I’m happier than ever.”

What Does It Mean To Be Nonbinary?

You know the gender binary — it’s the thing the doctor’s office makes you check off all the time, those M and F boxes. Nonbinary people aren’t necessarily men or women, with no M or F boxes to check. Just like the term suggests, nonbinary people exist outside the gender binary. A lot of nonbinary folks identify as trans, since they don’t identify with the binary gender they were assigned at birth. Many nonbinary people use gender-neutral pronouns like they/them/theirs, xe/hir/hirs, or xe/xem/xer.

Some folks who may consider themselves under the nonbinary umbrella have no gender — agender is another word for that. Other people fluctuate between different genders at different times (genderqueer and genderfluid are often used to describe those experiences and identities).

New terminologies are being coined all the time, and, as LaBarbera puts it, you can always define what a chosen label means for you — or, heck, create your own.

Editor's Note: This article was updated to include the full name of The Lesbian, Gay, Bisexual & Transgender Community Center.

More like this
The Indigo Girls Taught Me Queer Relationships Could Be Messy, Too
By Hannah Soyer
Bumble's "Compliments" Feature Lets You Message Before You Match
By Lexi Inks
These Are The Best Supplements For Runners
By Carolyn Steber
The Best Lat Exercises With Dumbbells, According To Trainers
By Carolyn Steber
Get Even More From Bustle — Sign Up For The Newsletter

This article was originally published on June 9, 2021