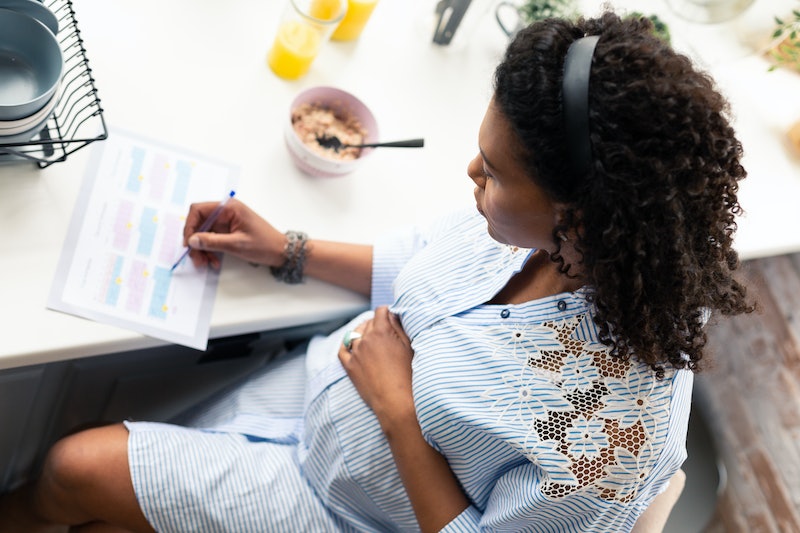 After years of trying not to get pregnant, you might think all it takes is one night without a condom, and poof — you're with child. But it's not always that easy. If you notice a few signs of being fertile, the process might be smoother. But for others, it may be more difficult.

So what can make one person more fertile than another? "Certainly genetics have a lot to do with diagnoses like premature ovarian insufficiency, polycystic ovary syndrome, endometriosis, and hyperprolactinemia," Debra Gerson, L. Ac., Dipl. OM, FABORM, a women's health and fertility expert, tells Bustle, speaking about health risks that affect fertility. "However, we are seeing more lifestyle and environmental influences on fertility ... [such as] poor lifestyles with too little sleep and too much caffeine."

Nutritional deficiencies can play a role, Gerson says, as well as any sexually transmitted infections (STIs) you might have or once had. For example, chlamydia, which is a common STI caused by bacteria, can sometimes lead to fallopian tube blockage, which could make natural conception difficult.

So if you want to have a baby but are having trouble conceiving, speak with a doctor. "Even though a woman may appear to be super fertile, we recommend being evaluated after one year of unprotected intercourse in women under the age of 35, and six months in women over 35," Gerson says. (And see if your partner can be checked, too.) So if you’ve been wondering, “How do I know if I am fertile enough to get pregnant?” check the below signs of fertility in women that could help answer your question — just note that there's no one predictor.

1. You Have The Most Predictable Period On The Planet

If your periods come every 25 to 35 days, it could mean you're fertile, and that's because this reliable pattern a good indicator that you're ovulating every month, Dr. Wendy Chang, MD, an obstetrician/gynecologist with Southern California Reproductive Center, tells Bustle. A longer cycle can also mean you have a strong ovarian reserve (AKA, lots and lots of eggs).

Keep in mind, though, that we're talking about a natural menstrual cycle, and not one that's coming and going due to birth control pills. If a natural cycle is predictable, it could make it easier to conceive.

2. You Get All The PMS Symptoms

While there's nothing fun about PMS, all those cramps and headaches can be a good sign, if you're interested in having a baby. "If you have clockwork periods and you get premenstrual symptoms like breast tenderness, bloating, and cramping, it means that you have ovulatory cycles," Dr. Adeeti Gupta, MD, a New York City-based OB/GYN, tells Bustle. And that's exactly what you want if you're trying to conceive.

3. You Have The Magic Ability To Affect Other Women's Periods

Did your roommate's period sync up with your own? Or have you noticed that your best friend, who's around you all the time, is starting to get PMS right when you do? If so, this could be due to your pheromones, Dr. Sophia Yen, MD, MPH, the CEO of Pandia Health, tells Bustle. Fertile folks tend to give off strong ones, which can end up affecting other people. There's lots of anecdotal evidence to back this up, as many people notice the influence other's periods. And that may just be a sign you're fertility game is strong.

4. You Have Lots Of Clear Discharge

Women are most fertile halfway through their cycle. During this time, you might notice copious amounts of clear, odorless vaginal discharge. "This facilitates sperm transport through the cervix just before conception," Chang says. "Women who notice lots of clear mucous discharge likely enjoy good estrogen production and cervical gland function." All good things when it comes to making a baby.

5. You Have An Average Amount Of Blood Flow

Everyone's period is different, so you could experience a heavy flow or the lightest of trickles. And both can be OK. You do, however, want to be somewhere in the middle when trying to get pregnant. As Chang says, "Having normal flow volume and duration are reassuring signs that a good lining [of the uterus] is produced and shed each month."

If you have concerns about the amount of flow you have, let a doctor know. They see if it's cause for concern, and may direct you to other fertility tests, if you're trying to get pregnant.

6. Your Hormones Seem To Be Balanced

Hormones (unsurprisingly) play a huge role in fertility, so keep an eye out for signs they might be out of whack. For instance, "hot flashes and night sweats can mean waning ovarian function or other hormonal/system abnormality, and should be assessed by a doctor," Chang says. "Women with excellent hormone production tend not to experience these symptoms."

While premenstrual cramps may point to a healthy cycle — and a better chance of getting pregnant — you definitely don't want to be in agony in the pelvic region. As Chang says, "Sometimes severe menstrual or pelvic pain can represent endometriosis, ovarian cysts, infection, or other disorders that can impact the ovaries and fallopian tubes," and possibly your ability to get pregnant.

If you have any pain in that area, let a doctor know. They can check to see if one of these health issues is to blame, and give advice on the right form of treatment.

Speaking of treatments, if you've stayed on top of your health, and gone to the doctor for things like urinary tract infections and STIs, then you may have a better chance of being fertile.

That's because, as Chang says, people who have had consistent gynecological care since starting sexual activity are less likely to develop a pelvic infection, which can block or affect those egg-delivering fallopian tubes, and thus impact your fertility.

9. You Have A Healthy Diet

Lifestyle factors can have a pretty big impact on whether or not you get pregnant, so eating well is always a good thing — especially when it comes to getting certain vitamins. So it may help to take a look at what you typically eat in a day, and how you're feeling overall.

"Our work schedules and lifestyles have created certain nutritional deficiencies (i.e. vitamin D), which can also impact fertility," Gerson says. If you notice that you aren't getting enough of one food group, try to find small ways of adding it in, with the goal of having good health.

Have you gotten pregnant in the past despite using an IUD or a shot form of birth control? As long as the doctor didn't do something wrong, like place the IUD in the wrong spot, then you're likely fertile. "I have only heard of two cases of women getting pregnant on the shot and the IUD, but it happens, and those women are very very fertile," Yen says.

So this isn't something you really have to worry about, if you're trying to avoid pregnancy. But it may be a rare side effect for some people whose bodies may be extra fertile.

11. You Have Curvier Breasts

Since breast size can be affected by your hormones, having "well-developed" or curvier breasts can indicate that your hormones are functioning, gynecologist Dr. Neha Singh Rathod, OBG, tells Bustle. And that can be a sign of fertility.

Of course, this doesn't mean people with smaller breasts can't become pregnant. Of course not. Breast size is simply another sign that can point to some women being extra fertile, but it isn't the only indicator, nor is it a guarantee.

In noticing all of these signs, it can be fun to speculate about whether or not you'll have an easy time conceiving. And yet, as Chang says, a woman shouldn't be considered fertile until she's actually had a baby, which is (obviously) the clearest sign of them all. And if you have any problems or concerns, don't be afraid to talk to your doctor.

Panth, N. (2018). The Influence of Diet on Fertility and the Implications for Public Health Nutrition in the United States. Frontiers in Public Health. https://www.ncbi.nlm.nih.gov/pmc/articles/PMC6079277/

Wilcox, A. (2000). The timing of the “fertile window” in the menstrual cycle: day specific estimates from a prospective study. The BMJ. https://www.ncbi.nlm.nih.gov/pmc/articles/PMC27529/