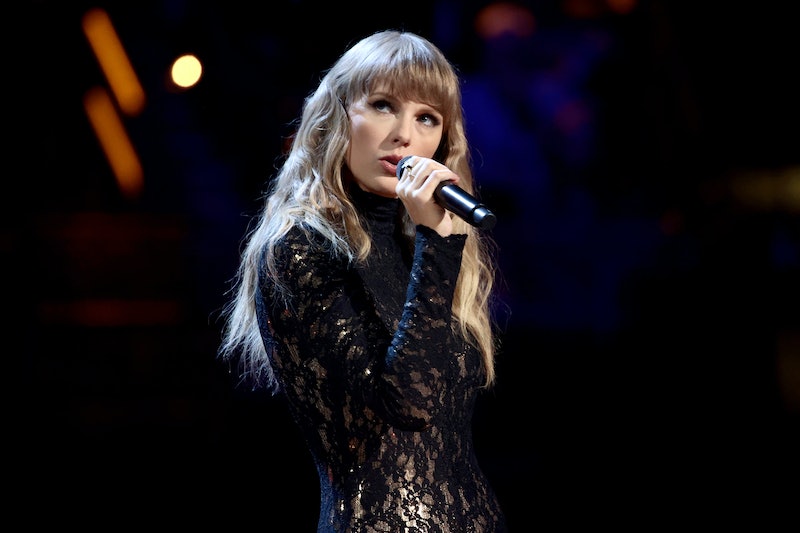 “You know you’re happily married, right?” My husband called out from the bedroom as I belted the “All Too Well” chorus in the kitchen for the fourth time that day.

I knew, intellectually, that he was right. But thanks to Taylor Swift’s re-release of Red (Taylor’s Version) and the premiere of All Too Well: The Short Film, my heart was feelin’ 22 (ooh ooh ooh ohh) again, and we were both broken. I hadn’t thought about my ex in years, but listening to Taylor’s music is like traveling through time to 2012, back when I was living with roommates, binge drinking every weekend, and intoxicatedly texting my ex. I had to actively remind myself that I was now 32, sober, and oh-right-yeah married.

We all know that texting an ex is generally never the *best* idea, but Taylor’s melodies seemed to be suggesting otherwise. It turns out I wasn’t the only one experiencing a Swift-imposed emotional regression.

“You know what’s sick?” Jeanne, a married woman from Boston, texted me. “This album makes me want to text my ex something along the lines of ‘I hope you know that you ruined me but also I’m doing great now.’”

Michelle from New York hit “send” on her own text message in the hours after Red (Taylor’s Version) came out. “I texted my ex that night and I’ve been reflecting on our whole relationship since then.”

Ellie Schnitt, host of Taylor Talk on Spotify Greenroom, isn’t surprised by the strong reactions elicited by Taylor’s latest album. “Red has always been a masterpiece of an album, but Red (Taylor’s Version) is special. It’s not only an artist revisiting her work 10 years after the fact, but also an audience who grew up with this artist revisiting their own feelings about an album that got them through their first love and heartbreaks 10 years ago.”

All Too Well: The Short Film offers an intimate portrayal of heartbreak. The film, written and directed by Taylor, revisits a relationship from her early 20s (with someone who, ahem, may or may not be a famous actor) that culminated with the kind of bedridden sobs reserved for infants and the newly dumped. Between the fall foliage, tears, and eerily relatable fights, the film has triggered a palpable and widespread nostalgia.

“No matter how happy you are now, ‘All Too Well’ takes you back to where you were when you first heard it,” shares Lindsey Metselaar, host of the popular millennial dating podcast We Met at Acme. “For me, I was 21, and experiencing this weird transition of graduating from college, ending a relationship, and not being taken seriously as an adult yet. Taylor just has this hold over us and brings us right back to that emotional state.”

Mia, from New Orleans, agrees: “Listening to the album feels like reverting to the age I was when it came out, but with more life experience and even more ways to relate. It’s so visceral.”

The Red 2.0 Effect has Swifties everywhere untethered in time and space, floating in an emotional abyss, re-wrecked by the heartaches they long since healed from. “I picked a fight with my fiancé just to be in the ‘All Too Well’ headspace,” Lindsey confessed. This time around, it’s not Mercury’s retrograde that’s got our love lives backsliding — it’s Taylor’s.

“I think Taylor’s album [casts] some type of spell,” agrees Alex, from New York, who reached out to her ex after she found herself listening to Red (Taylor’s Version) on her own upstate car ride this weekend. “‘All Too Well’ immediately made me think of him; he was the one I drove those same upstate roads with when I was 22.”

Even fans who know better have been swayed by Taylor’s lyricism. “Taylor clearly paints a picture of the wrong person for her throughout her album, which makes me think of my most recent ex,” says Julie, 25, from Connecticut. “But then I listen to ‘All Too Well’ and reminisce about fun fall drives with this person. So I called him, and I’m thinking of spending the holidays with him now.”

For her part, Taylor has not publicly acknowledged her ex. (Granted, her devoted Swifties have taken up the mantle for her.) When asked how a certain someone might feel about her new film on Late Night with Seth Meyers, Taylor responded that she “hadn’t given much thought to their experience.”

Still, as a storyteller, Taylor knows how to emotionally activate her audience with her words. And you call me up again just to break me like a promise / So casually cruel in the name of being honest, for example, is a particularly vivid throwback for anyone who has been in an on-again, off-again relationship. And the drama of it all is compelling: Fans have taken to social media to document themselves bracing for emotional impact and starting fights with their own partners over “All Too Well.”

But Ellie wants people to know that this is not a universal response. “Personally, I think Red has had the opposite effect — the updated ‘All Too Well’ doesn’t lean as much into the ‘missing an ex’ aspect [of the song] so much as it leans into the ‘Eff that guy, he sucked’ [reading]. So I think a lot of people are going, ‘Hey, actually, some of my past partners were absolute garbage!’ There’s been a lot of ‘I’m going to delete his number and burn all his old belongings’ for me.”

Grace, 29, from Dallas, also sees the song in a more empowered light. “Taylor once couldn’t sing ‘All Too Well’ without crying, but now it represents healing, and that is a magical thing.”

This seems like the kind of analysis that 2021 Taylor would support. The end of the short film jumps ahead to 13 years after the breakup and shows Taylor’s character as a successful writer. Her ex, on the other hand, is left out in the cold (figuratively and literally), wearing her old red scarf. He can’t get rid of it because it reminds him of innocence, Taylor sings, and we get it. We, too, remember it all too well.

More like this
Do I Have To Tell My Crush That I Slept With Her Ex?
By Sophia Benoit
14 Underrated Date Ideas To Try With Your Partner
By Lexi Inks
Bumble's "Compliments" Feature Lets You Message Before You Match
By Lexi Inks
Are Capricorn & Aquarius Compatible In A Relationship? Astrologers Weigh In
By Kristine Fellizar
Get Even More From Bustle — Sign Up For The Newsletter