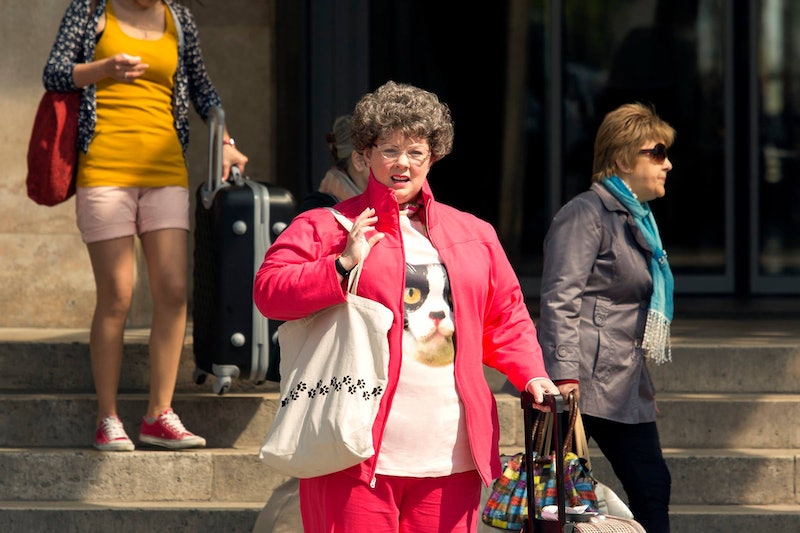 The Golden Globe nominations have only just arrived, but I'd guess that they've already been the subject of hundreds of heated debates and shared celebrations. The Golden Globes are always a hot topic because they honor both television and movies, and separate everything into two genre categories — drama and comedy or musical — meaning more of your favorites get recognized, like Steve Carell and Amy Schumer, who are both nominated for their performances in the Comedy category. Of course, the Golden Globes doesn't always get it right. The 2016 Golden Globe nominees are predominantly white — no surprise there — and male, with only one woman nominated for screenwriting (Emma Donoghue for Room). Other categories are more diverse, like Best Performance by an Actress in a TV Drama, which include nominees Taraji P. Henson (Empire) and Viola Davis (How to Get Away With Murder). But, putting aside the bad, here are 11 things the Golden Globes got right.

Looking at the 2016 Golden Globe nominations, it's shocking how many (relative) newcomers were recognized for their work. The nominees for Best Performance by an Actress in a Drama read like a who's who of up-and-coming actresses (Brie Larson, Rooney Mara, Saoirse Ronan, Alicia Vikander), each tasked with competing against Cate Blanchett for the golden statue. Television categories are also populated by freshman shows, with four out of the five nominees for Best TV Drama nominated for their first(ish) seasons (Empire, Mr. Robot, Narcos, Outlander). Which brings us to the first thing the Golden Globes got right this year:

The next generation of stars has arrived with this year's Golden Globe nominations. Whether it's in film or television, the HFPA has finally decided not to nominate the same old actors — or, let's be real, actresses. Alicia Vikander earned not one, but two nominations for her breakout performances in The Danish Girl and Ex-Machina, Brie Larson (Room) and Saoirse Ronan (Brooklyn) are both nominated for their first major leading roles, and Melissa McCarthy got her first Golden Globe nod for Spy. Male categories also welcomed newcomers, though most in the television categories, which handed out nominations for Mr. Robot 's breakout star Rami Malek and Wagner Moura for Narcos.

Mark Ruffalo could do nothing but sneeze on film and his performance would be worthy of a Golden Globe. And, while it might feel like Ruffalo has already racked up his fair share of nominations, looking at the numbers, it's simply not true. Ruffalo's nomination for Best Actor in a Comedy for Infinitely Polar Bear marks only his third Golden Globe nomination. Other than the fact that Ruffalo is wonderful as a manic-depressive father of two in Infinitely Polar Bear, this is also a great nomination because it will hopefully bring attention to a film not many people saw. Infinitely Polar Bear, a rare film from a woman writer-director, Maya Forbes, got lost in the summer shuffle, but it's a movie that people should seek out. Hopefully Ruffalo's nomination will help boost the film's profile.

Melissa McCarthy more than earned her nomination for Best Performance by an Actress in a Comedy for Spy. Not only is McCarthy hilarious in the film, she also created a complex and strong female character that women everywhere can relate to. What is special about Melissa McCarthy and Spy is that, even if McCarthy's character is sometimes the butt of a joke, she never becomes a joke.

AMY. EFFING. SCHUMER. First Spy , then Trainwreck — I think it's pretty clear that women ruled the comedy game this year. Amy Schumer's breakout film was a huge hit, and, with two Golden Globe nominations, it proves that there's room for movies with female protagonists who reject traditional social norms.

Emma Donoghue, who adapted her own book for Room, is the only woman nominated for Best Screenplay. She is also the only woman nominated in a behind-the-scenes category for motion pictures and Room is the only screenplay nominated that has a female protagonist (even if it is told from a boy's point of view). Room deserves any and all awards love it receives, including the nomination for Donoghue's heartbreaking story.

6. Viola Davis — How To Get Away With Murder

Viola Davis just won an Emmy for her starring role in How to Get Away With Murder, so it's not surprising that she was nominated for a Golden Globe, but it is still awesome. Say what you want about the dramatic show form Shondaland, but Davis' performance is always on point.

YAAAS, Cookie, YAAAS! Taraji P. Henson joins Viola Davis in the Best Actress in a TV Drama category for her role in FOX's Empire. Henson's over-the-top performance as Cookie is infinitely entertaining and engaging. Even people who hate Empire can agree that Henson's nomination is 100 percent deserved. Henson's nomination also helps the Golden Globe nominations reflect the increase in diversity currently happening on the small screen. The more that is celebrated, the more networks will be encouraged to make shows reflective of our diverse society.

8. Aziz Ansari — Master of None

Aziz Ansari earned a nod for Best Actor in a TV Comedy for his sitcom, Master of None. Though his Netflix show failed to get a nomination for Best TV Comedy, it's still great that Ansari's show was recognized, especially given the fact that one of Master of None's most engaging episodes is titled "Indians on TV."

Yes, I know, Gina Rodriguez already took home the Globe for Best Actress in a TV Comedy last year. But, come on, it's Gina Rodriguez! As Jane in Jane the Virgin, Rodriguez never fails to give a brilliant performance. She will make you laugh and cry at the same time, all while making you fall in love with her. Today's a great day, Gina!

10. Idris Elba Is A Double Nominee

Idris Elba got not one, but two Golden Globe nominations — one for Best Actor in a TV Mini-Series or Made for Television Movie (Luther) and one for Best Supporting Actor for Beasts of No Nation . It's great to see Elba getting so much recognition, and hopefully it'll make producers think seriously about hiring Elba to be the next James Bond. As I always say, the more Idris Elba, the better!

11. Lily Tomlin Is A Double Nominee

Debates about the 2016 Golden Globe nominations are only going to become more heated once all the movies come out in theaters, so enjoy the good news while you can!