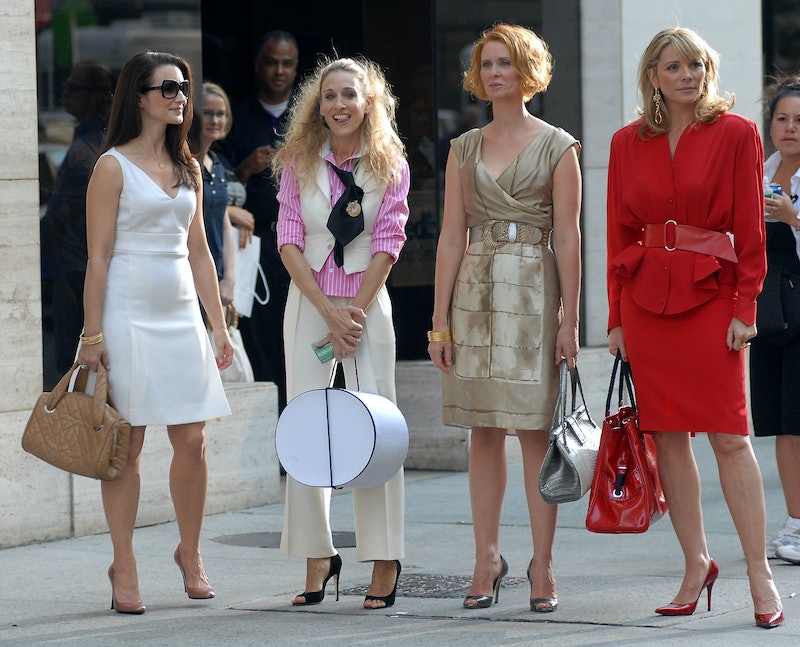 It's been 18 years since Sex And The City first premiered on HBO. For many, it was a show in which the wardrobe was just as important as the cast of characters. So it's no surprise that many Sex And The City outfits and trends are still 100 percent relevant today.

I grew up watching SATC re-runs, so my DVD box set is completely worn out. As a young adult interested in style, SATC — and especially Carrie Bradshaw — showed me that it was OK to experiment with clothes and just be yourself. Carrie wasn't always decked out in ball gowns, but she did find a way to make even her casual outfits fun and infused with personal style.

The signature style of the SATC cast should be credited to stylist Patricia Field who announced in Dec. 2015 that she was closing her East Village store (a New York City staple since 1971). Field's iconic style will live on through her work, though, and of course in SATC re-runs that I know I personally can't help but watch for the 10th time.

Even if some SATC outfits may seem cringe-worthy to some, it's still a show that many, myself included, look to for inspiration. Fashion is cyclical, so you can make fun of a trend one year only to be wearing it the next. In fact, many of today's fashion trends actually had a role in SATC. Here are some looks from the series that are still relevant today.

Crop tops ruled summer 2015 and it seemed like everyone — straight and plus sizes alike — was rocking the trend. Carrie was a fan of the crop top, even pairing it with a stylish fanny pack for a look that I'm going to need to recreate ASAP.

What SATC fan could forget that Miranda wore burgundy velvet to her wedding to Steve? This winter, velvet made a comeback in a very witchy way.

I think about the episode in which Charlotte watches the Elizabeth Taylor documentary and emerges in this adorable sweetheart neckline dress whenever I get down on myself. Fashion can be something that you fall on to pick yourself back up. This dress is a classic cut and totally Charlotte.

I can't speak for straight size fashion, but the majority of mainstream plus size brands I follow released a tutu or tulle skirt over the past year. I can't help but think that Carrie's iconic layered tulle skirt from the opening credits has something to do with that.

Print-mixing is no easy-feat sometimes, but the SATC cast always did it flawlessly. In this episode, Samantha and Carrie somehow even managed to match each other.

I love faux fur coats for the winter, but the SATC crew did it while I was still rocking peacoats in middle school. It's hard to be stylish in the colder months, but this squad definitely made it look easy and fun.

While some may look back at Miranda's first season menswear-style suits and cringe, I see inspiration. I think challenging gender norms through fashion is super important and something I hope we see more of in the future.

Rainbow locks were one of 2015's viral hair trends and it's safe to say that Samantha's pink wig would have had her fitting right in.

I seriously need to own this rainbow sequin skirt, like right now. Though 2015 saw a rise in minimalist fashion, it also brought us a further appreciation for the opposite: sequined maximalism. This skirt would fit right into my 2016 wardrobe.

I've heard some folks call this one of Carrie's worst looks ever, but I am a fan of the exposed bra aesthetic and I think for those of us with a more trashy/gaudy style, this look will never go out of vogue.

From Samantha's fur purse to Charlotte's houndstooth coat, this whole shebang is precious. The looks reveal each character's distinct style, while also serving as evidence for why wearing booties in the winter is always a good sartorial choice.

The episode where Carrie is asked to walk for Dolce & Gabbana is a classic — mostly because Carrie falls on the runway and picks herself up in triumph. But I tend to prefer the bold print of this dress from the fitting earlier in the episode. I think floral print will never go out of style, and neither will this dress.

From bodysuits to leggings, there's no doubt that mesh ruled fashion for those with edgier sensibilities in 2015. I wish I owned Miranda's dress in size fat.

Charlotte wore this tweed suit in the first season of SATC and while it's not my personal style, it looks a lot like what Rihanna rocked to the Tidal launch in 2015.

This Emanuel Ungaro pink power-suit is so iconic Samantha Jones that the brand Clashist put it on a tee. When I think about being an entrepreneurial fashion badass, I think of this ensemble.

It was written into Sarah Jessica Parker's contract that she got to keep all of the clothes from the show that weren't samples. Lucky for fans, this John Galliano for Dior newspaper print dress was one of the pieces she still had and brought back for the second Sex And The City movie. The cut is classic early '00s, but the look is pretty timeless to me.

While it may seem easy to brush off any show from the late '90s or early '00s as being devoid of style inspiration, Sex And The City will never be that show. The outfits were bold and fashion-forward at the time, and they will continue to live on through the droves of adoring fans who think of Carrie every time they put on a tutu.