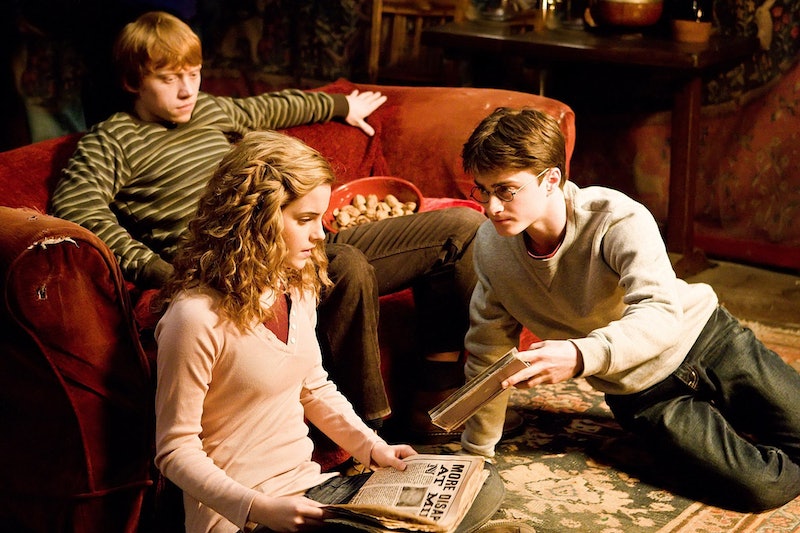 But it’s been a while since I’ve reread the series. There are so many other books I want to read, and as beloved as the HP books are to me, I enjoy experiencing other series and novels as well. And with a TBR pile that could more accurately be described as a TBR bookshelf, I usually reach for one of the books I’ve been meaning to read for forever, instead of revisiting old favorites.

However, it’s been long enough that I decided to crack open the first book once again. After all, if you’re a HP fan, you know that there's no harm in rereading the series, even if it’s for the millionth time. And here are the thoughts that will run through your mind while you do.

1. The First Line Is So Iconic

"Mr. and Mrs. Dursley, of number four, Privet Drive, were proud to say that they were perfectly normal, thank you very much."

Iconic. And it's really hilarious that a series so full of magic and whimsy begins with an utterly un-magical family. Interesting.

2. Remember When You Didn't Know What A Muggle Was?

When Vernon Dursley first gets called a Muggle... what an amazing image. But I can remember when I first read that sentence, and it sounded as foreign to me as it does to Vernon. Looking back, it's an interesting choice to start the story with outsiders getting a glimpse into the magical world... because that's exactly what we readers are.

3. Everything Is So Significant

Rereading HP makes you appreciate how little details come back into the story later. For example, Dumbledore's Put-Outer. It seems as if it's just a small detail, used to make the atmosphere even more magical. But then it ends up being super significant in The Order of the Phoenix.

He even says that "scars can come in handy." HE KNEW SO MUCH. And yet he kept it all to himself.

Anyone else listen to the Harry Potter audiobooks narrated by Jim Dale? I can't read the books now without hearing his voice. This is not a complaint. I am so glad for it.

When the Dursleys are trying to figure out what to do with Harry while they're at the zoo, they mention two familiar characters who will show up later in the series: Mrs. Figg, and Aunt Marge. They also mention Mrs. Dursley's friend Yvonne, who is apparently on vacation in Majorca. Wonder what she's up to these days.

7. The Dursleys Are Truly Terrible

Need proof? Here's a quote as an example:

8. This Series Is So Witty

"They stuff people's heads down the toilet the first day at Stonewall," he told Harry. "Want to come upstairs and practice?"

"No, thanks," said Harry. "The poor toilet's never had anything as horrible as your head down it -- it might be sick." Then he ran, before Dudley could work out what he'd said.

The month-old video camera was lying on top of a small, working tank Dudley had once driven over the next door neighbor's dog; in the corner was Dudley's first-ever television set, which he'd put his foot through when his favorite program had been canceled; there was a large birdcage, which had once held a parrot that Dudley had swapped at school for a real air rifle, which was up on a shelf with the end all bent because Dudley had sat on it. Other shelves were full of books. They were the only things in the room that looked as though they'd never been touched.

9. I Feel Awful For Petunia

She just wanted to go to Hogwarts! Can't we all sympathize? Re-reading the first book gives me a new perspective on her character, and I definitely feel for her.

Perhaps he can't Apparate. Did he fly on a broomstick? I never analyzed this before, but now I wonder.

11. The School Uniforms In The Films Were Quite Different

In the books, Harry is told to buy black work robes and a black pointed hat for day wear. Amazing.

12. What Is The Dollars-To-Wizarding Money Conversion Rate?

When I first read the books, I always wondered how many dollars to a galleon. As Harry was walking around Diagon Alley and I was rereading, I remembered this helpful chart. Now you can know exactly what the conversion is.

13. Poor Harry Has To Go Back To The Dursleys

After shopping in Diagon Alley with Hagrid buying his school supplies, and getting a taste of the wizarding world, Harry has to go back to the Dursleys for an entire month. I had forgotten that he had to go back for so long... poor Harry. At least he had Hedwig to keep him company. Also, the Dursleys just straight up leave him at King's Cross... For all they know he never even made it to Hogwarts!

14. Harry Is A Really Kind Person

First, Harry meets Draco Malfoy, who is obviously rich and influential in the wizarding world. Next, he meets Fred and George, who are hilarious and interesting. But who becomes his best friend? Ron Weasley, the quiet and somewhat overlooked younger Weasley. Harry recognizes good character when he sees it.

15. Are There Other British Wizarding Schools?

Hermione says that Hogwarts is "the very best school of witchcraft there is." So, are there other British wizarding schools that aren't as good? And if so, Hogwarts students totally should have traveled to play Quidditch matches against them. Though Hermione probably just meant that Hogwarts was the best among schools such as Beauxbatons and Durmstrang. Still, it makes you wonder.

17. It Takes Forever For Harry To Get To Hogwarts

It's nearly 100 pages before Harry even arrives at Hogwarts. But what an intro it was.

18. I Missed The Songs In The Movies

In the books, there were so many random songs and poems. As Dumbledore says, "Ah, music... a magic beyond all we do here!"

"What would I get if I added powdered root of asphodel to an infusion of wormwood?"

20. The Movie Was Actually Very True To The Book

The first film was so similar to the book. As I reread, I'm struck by just how close the script followed the book. Though a few things were left out (most of the Norbert/Noberta saga), the movie actually covered so much. I am sad, however, that Snape's logic test was left out of the trapdoor trials in the movie. Hermione's use of cool logic was one of my favorite moments in the book.

21. ...But Book Ron Was Different Than Movie Ron

"Devil's Snare, Devil's Snare... what did Professor Sprout say? — it likes the dark and the damp."

"So light a fire!" Harry choked.

"Yes — of course — but there's no wood!" Hermione cried, wringing her hands.

"HAVE YOU GONE MAD?" Ron bellowed. "ARE YOU A WITCH OR NOT?"

"Oh, right!" said Hermione, and she whipped out her wand, waved it, muttered something, and sent a jet of the same bluebell flames she had used on Snape at the plant.

22. The Book Is Just As Magical As I Remember

Though I've read the words so many times, I still feel so happy when rereading Harry Potter. I have to admit, I feel a tiny tinge of jealousy for those who haven't read the series yet, and get to experience it for the first time. Rereading the books reminds me of the first time I read about an ordinary boy who had an extraordinary life.