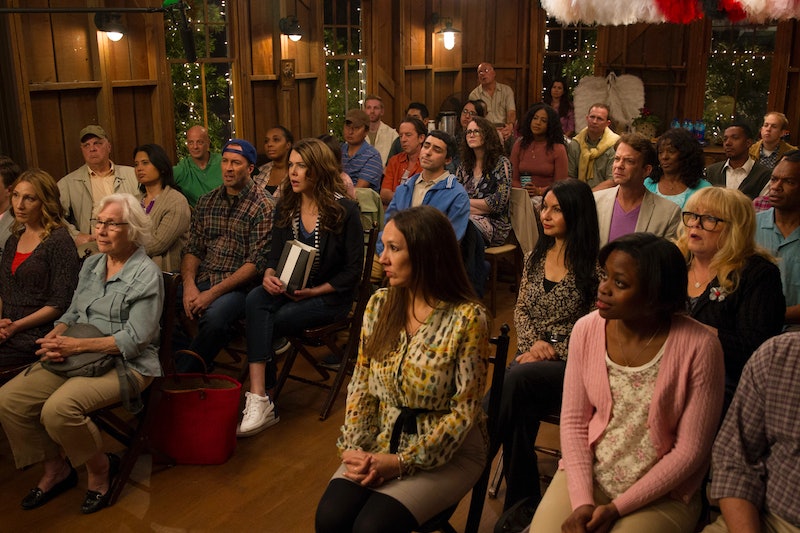 I’ll be honest with you: Ever since it was announced that a Gilmore Girls revival would be premiering on Netflix, I’ve basically spent my life culling information about the four-part series and waiting for new information to be revealed. So you can imagine my frustration with having to wait weeks and now months for Netflix to announce the Gilmore Girls revival premiere date. It basically takes all of my strength every single day not to send them GIFs of Emily Gilmore looking disapprovingly down her nose at them.

But, thankfully for all involved, there have been a number of hints and reveals that have helped fans narrow in on a release date. Even if it is still unconfirmed, this ever-decreasing window has helped me to feel like I have some sort of control over my life these days as I spend my days waiting idly by. Because there have been enough hints about the Gilmore Girls revival date to make some seriously educated guesses about when the four-part series will be released. As much as I’ve gotten good at waiting, I’m about to go on a GIF-sending rampage if I have to do it any longer. You know, like a normal person.

So here are all the hints that we know so far about the Gilmore Girls revival release date.

When the Gilmore Guys started a Twitter campaign to post your favorite scene from every single episode of Gilmore Girls, people wondered if the 153-day event could be leading up the premiere date. After all, 153 days is November 22, which is right around when many people have speculated the series could air.

When a fan commented on his Instagram photo inquiring about the reveal date, this Life and Death Brigader said, “November, I think.”

3. When Filming Wrapped And There Still Wasn’t A Release Date

Even movies have release dates by the time they start post-production. What’s the hold up, Gilmore Girls? Seriously though, the end of filming was a good sign that the release date could be sooner than we thought. I mean, how long can post-production really take?

4. When Lauren Graham Revealed It On Ellen

When Lauren Graham announced her new book of essays on the Ellen DeGeneres Show, she said the collection would be coming out concurrently with the revival. Interesting, Lauren, because your book is scheduled to be released on November 29. Does that mean a Black Friday release date is something we all can look forward to?

5. When The Gilmore Guys Confirmed A December Release Date

In their podcast back in April, the Gilmore Guys mentioned a chat with Lauren Graham in which the actress confirmed a December release date. Later, however, the Guys denied the rumor, saying that Graham never confirmed a release date during their conversation. Good, because I didn’t want to wait that long for it anyway.

6. When Netflix Announced It Would Definitely Be Sometime This Year

I mean, it’s better than January, but… ummm… thanks?

7. When Tanc Sade Mentioned Something About The End Of The Year

And broke all of our hearts simultaneously.

With all of these hints in mind, I’m thinking sometime in late November or early December is when we can be expecting the series to premiere. So, while we wait for official confirmation, I’ll just be over here praying that we get these four episodes sooner rather than later.

More like this
'Gilmore Girls’ Lauren Graham Just Revived Our Hopes For A New Reunion
By El Hunt
The First Trailer For 'That '90s Show' Includes So Many Nods To The Original Series
By Jack Irvin, Alyssa Lapid and Grace Wehniainen
These 'Criminal Minds' Throwback Photos Show The Cast’s 17-Year Evolution
By Grace Wehniainen
The 'Ugly Betty' Cast Just Reunited In The Best Way
By Sam Ramsden
Get Even More From Bustle — Sign Up For The Newsletter